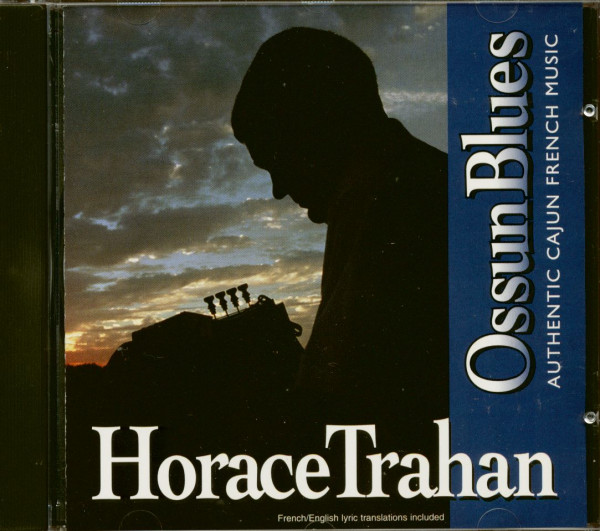 (Swallow) 15 Tracks - Authentic Cajun French Music - French/English translations include
Horace Trahan is the genuine article, reminiscent of Iry Lejeune in more than repertoire and style. During the 1930s and `40s, Cajun culture underwent a period of brutal Americanization during which the traditional sounds of accordion-driven Cajun music were forced underground in favor of the western-swing string band style. After World War II, young Iry Lejeune led the emotion-laden sounds of old-time Cajun music out of the closet by the sheer power and purity of his unselfconscious performance. Now, in a period of heavy flirtation with the sounds of rock and country, young Horace Trahan emerges with a sound that reminds us of the heart of the tradition for the same reasons.

Horace was born in Lafayette, June 12, 1976, the third year of the Cajun Music Festival when it first moved outside to Girard Park. To put things in perspective, the first version of Michael Doucet's Beausoleil performed that year. Horace grew up in the little country town made famous by Lawrence Walker's "Ossun Two-step." He was raised in a tradtional French-speaking family. He heard Cajun music all his life. His dad Helaire was the son of Helaire Trahan whose sisters were Joe Falcon's "filles a noncle Helaire."

Like many kids his age, he was more interested in contemporary rock and country at first. He bought a guitar at age 12 with money he earned by planting and selling okra. "I had long hair and everything," he remembers. "That didn't last too long." At 16, he told his dad he wanted to play the accordion. At first, Helaire said he didn't want to "throw him to the pigs," referring to the dubious reputation of the musician's life in traditional culture, but later he took his son to visit his first cousin, Felix Richard, who had also taught Zachary Richard to play the accordion. Felix first showed him to play the bass side, then the melody, so that Horace would play the whole accordion.

Young Horace imitated his men-tor's style. He also acquired Felix's reverence for Try Lejeune, imitating his mournful lyrics. The young apprentice could not have chosen better masters. As Horace learned to sing in the French language of his heritage, he found himself frustrated at first because he didn't speak the language fluently enough for his liking. So he made a deal with his family and friends to speak only French so that they ,would become functional for him. At first, he was driven by a desire to sound more convincing when he sang. He grew increasingly aware of the impor-tance of preserving the language to preserve the cul-tural expression it represents. The first time I heard Horace Trahan was at the "Rendez-vous des Cadiens" weekly live radio show at Liberty Theater in Eunice. He had wandered into a jam session at the Jean Lafitte Acadian Culture Center next door earlier that Saturday. Horace was suprised and delighted to find that such things existed.

"Rendez-vous" staff member Helena Putnam had heard this enthusiastic kid perform there that afternoon and told me about him. During the show that night, she noticed that the kid was sitting out in the audience and pointed him out. Trusting her judge-ment I went out during a song and asked him if he would come up on stage to play a song if we could steal a few minutes in the show. He agreed. It was to be his first public performance, one song, sitting in a chair on stage all alone with only his accordion. He played and sang Iry's "Wiens me chercher," a song that he had learned from Felix. The power and clarity of his performance brought tears to eyes of many in the audience and several backstage. The crowd rose in a spontaneous standing ovation as he ended the song, yet no one was more moved than Horace. It was one of those magic moments filled with beauty and hope.

Since then, Horace has discovered lots more jam sessions. He has performed in public with many new friends, some young, some old, including the members
of Les Jeunes Gens de la Prairie. He has played folk festivals with Balfa Toujours. He joined D. L. Menard's Louisiana Aces, touring with him and per-forming on D. L.'s most recent album "Cajun Memories." Without losing his reverence for Iry Lejeune, Horace has added a few other heros such as Nathan Abshire and the Balfa Brothers. His range is expanding exponentially. Yet he remains deeply com-mitted to old-time Cajun music as this album so elo-quently demonstrates. Even his new songs have the Patina of the traditional sound, because they are coming from the same place that produced the old songs. It is clear that Horace is in love with the music of his heritage.

This is no job. He is fascinated with it; he is thrilled by it; it gives him the kind of rush that only true love can. He wants to know all about every aspect of it, the styles, the songs, the language, the spirit. A good lick can make him laugh out loud, whether he's playing by himself or in front of a festival crowd. Horace Trahan may be Cajun music's best hope for the future, ironically because he is so firmly rooted in the past.
(Barry Jean Ancelet)