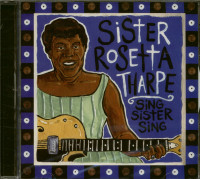 Tracklist
Tharpe, Sister Rosetta - Sister Rosetta's Gospel Train (CD) CD 1
01 Peace In The Valley
02 Didn't It Rain
03 The Gospel Train
04 Sometimes I Feel Like A Motherless Child
05 He's Got The Whole World In His Hands
06 Can't No Grave Hold My Body Down
07 Mansions In The Sky
08 Is Everybody Happy
09 Vacation In The Sky
10 Two Little Fishes, Five Loaves Of Bread
11 Can't Sit Down
12 Nobody Knows The Trouble I've Seen
13 Jonah In The Whale
14 Travelin' Shoes
15 That's All
16 Precious Lord
17 Go Ahead
18 Down By The Riverside