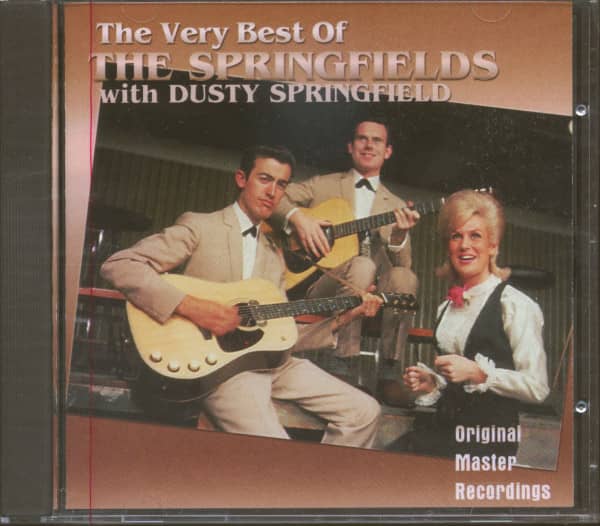 The Springfields originally consisted of Tom and Mary O'Brien (Dusty Springfield) and Tim Field, who left in 1962 and was replaced by Mike Pickwortb. (aka Mike Hurst, who went on to produce Cat Stevens). According to their pub-licist, they got their name from practising in a field on a Spring day. Their first chart entry in Britain was 'Bambino', an old Neapolitan carol that exemplified their commercial approach to folk music, as did their later hits 'Island Of Dreams' and 'Say I Won't Be There' which was adapted from 'Au Clair De La Lune'. They were one of the first British artists to record in Nashville and 'Silver Threads And Golden Needles', a failure in Britain, was a Top Twenty hit in both the country and pop charts in America. In 1963, the group split up when Dusty went solo. Kay Starr, an adept in most styles of popular song, was born on an Oklahoma Indian reservation on July 21, 1922. As a jazz singer, she performed with Joe Venuti, Bob Crosby, Glenn Miller and Charlie Barnett. In 1950, she turned up on the country charts with Tennessee Ernie Ford singing 'I'll Never Be Free', on Capitol. In 1956, she swam with the stream and reached No. 1 in both America and Britain with `Rock 'n' Roll Waltz'. She is said to have studied practical psychology as an aid to her career.

Review 0
Read, write and discuss reviews... more
Close menu
Customer evaluation for "The Very Best Of The Springfields - With Dusty Springfield (CD)"
Write an evaluation
Evaluations will be activated after verification.
Weitere Artikel von The Springfields
The Springfields: On An Island Of Dreams (2-CD) Art-Nr.: CDRPM820