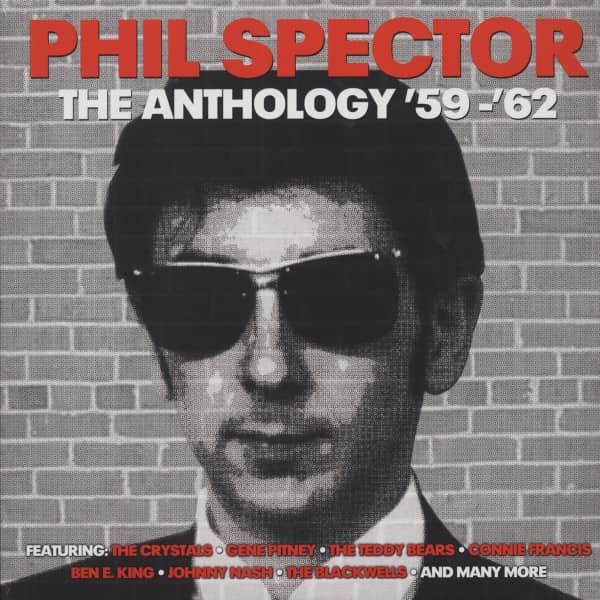 This article is deleted and can no longer be ordered!
Please inform me as soon as the product is available again.
P Secure bonuspoints now
Description
Learn more about Phil Spector
Review 0
Description
(2013/Not Now Music) 35 tracks more
Close menu

Phil Spector was born on Dec. 26, 1940, in the Bronx, New . York. His father died in 1949, and in 1953, his mother moved the family to California. The Spectors settled in Hollywood, and that year Phil enrolled at Fairfax Junior High School where he met Marshall Leib.

In 1957, Spector who was dabbling in songwriting - and Leib - who played piano - began working together on musical projects. Early in 1958 they roped in another Fairfax pupil, Annette Klein-bard, and formed a high school trio, the Teddy Bears. After graduation in June, they approached Dore Records, one of the many tiny labels scattered across L.A.'s huge sprawl, and were signed to a recording contract. Soon after, Spector wrote a soft teen ballad titled 'To Know Him Is To Love Him' (the title came from the inscription on his father's grave) and recorded it with the Teddy Bears. The record un-expectedly topped both the British and American charts and the Teddy Bears found themselves catapulted into national prominence. Like so many of their contemporaries, however, they were unable to consolidate their initial success and they disbanded in 1959.

Spector worked as a part-time steno-grapher while also studying at UCLA. Late that year, he decided to re-enter the record business. Still only 18, Spector approached the independent pro-ducers, Lester Sill and Lee Hazelwood, who agreed to take him under their wing. They were the immensely successful producers of Duane Eddy whom they recorded in an obscure studio in Phoenix, Arizona, and it was here that Spector was taken to observe and master the mechanics of record pro-duction. In 1960, Spector persuaded Sill to send him to New York where he studied under Leiber and Stoller as a studio factotum. Spector was then introduced to Stan Shulman, manager of Ray Peterson who had recorded the classic' death-disc, 'Tell Laura I Love Her'. /Peterson and Shulman had just formed their own label, Dtines Records, and they hired Spector to produce Peterson's follow-up for the new label. The result was a very professionally made revival of the old folk song `Corrina, Corrina', which made the Ameri-can Top Ten in December, 1960 ó giving Spector his first hit as a producer. On the West Coast, Sill allowed Spector an enormous amount of studio time to produce and during 1961, Spector spent close on $100,000 conducting what amounted to his own producer's course in the studio. But Sill's faith in his protÈgÈ was justified in December, 1961, when 'I Love How You Love Me', Spector's second production with a trio called the Paris Sisters, made the US Top Five on Sill's Gregmark label.

He also had a Top Ten hit with Curtis Lee's `Pretty Little Angel Eyes' on Dunes and a Top Fifty hit with Gene Pitney's 'Every Breath I Take', though one of his most interesting early efforts, Johnny Nash's 'Some Of Your Loving', flopped. Late in 1961, Spector and Sill formed the Philles (Phil-Les) label with a distributor in Philadelphia. Spector began recording a girl group, the Crystals, in New York and had two straight hits with `There's No Other' and `Uptown'. However, despite these successes Spector grew increasingly dissatisfied with the existing Philles set-up and, late in 1962, he bought out his partners. At 21, Spector had become the youngest ever label chief and now had total con-trol, with only the public to answer to. He began recording on. the West Coast, recruiting a team of session musicians and technicians. They included Leon Russell, Larry Knechtel, Glen Campbell, Hal Blaine, Earl Palmer, Barney Kessel, arranger Jack Nitzsche and* engineer Larry Levine. Within two years, this set-up had produced fifteen consecutive hits for Spector and Philles, including the Ronettes"Be My Baby', the Crystals' Then He Kissed Me' and the Righteous Brothers' You've Lost That Lovin' Feel-ing'.

This was the era of the famous 'Wall Of Sound', whose most formally perfect expression was perhaps the unusual Christmas Gift For You album (1963) on which all the Philles artists performed traditional seasonal songs. With the Wall Of Sound, Spector brought the art of record pro-duction to a new level of sophistication and complexity. Where others would employ a conventional four or five-piece rhythm section, Spector (through overdubbing) used instruments in multiples, skilfully interlocking them to create massive polyphonic sound structures. His was, as he said, 'a Wagnerian approach to rock and roll : little sym-phonies for the kids'. As a personality, Spector tended to be sensitive and ego-centric and he made enemies as a matter of course. In 1966, a mixture of circumstances led to the boycotting, in America, of a record he considered to be the highpoint of his career, `River Deep ó Mountain High' by Ike and Tina Turner.

Its American failure (it was a smash hit in Britain) caused an embittered Spector to withdraw from production and go into seclusion for two years. In 1969, after a shaky resurrection at A&M records, Spector re-emerged as producer. of the newly liberated Beatles, John Lennon and George Harrison. He knew better than to swamp them with the excesses of a bygone sound and million-selling albums like Imagine, and All Things Must Pass proved that he was capable of making records which allowed the artist an identity within the over-all framework of Spector's idiosyncratic production methods. Leaving Apple in 1973, he formed Warner-Spector re-cords with Warner Bros. in Los Angeles, while continuing to work with Lennon.

Little of note came of the new arrange-ment and during 1974 rumours were rife of Spector's eccen-tric behaviour. He suffered a mysterious accident at this time, but returned in 1975 with a new company, Spector International, whose first signings included Dion and Cher. At that point it remained open as to whether Phil Spector would once again make his mark on rock music, or whether in retrospect his finest years would be seen as the Philles period of 1963-6.