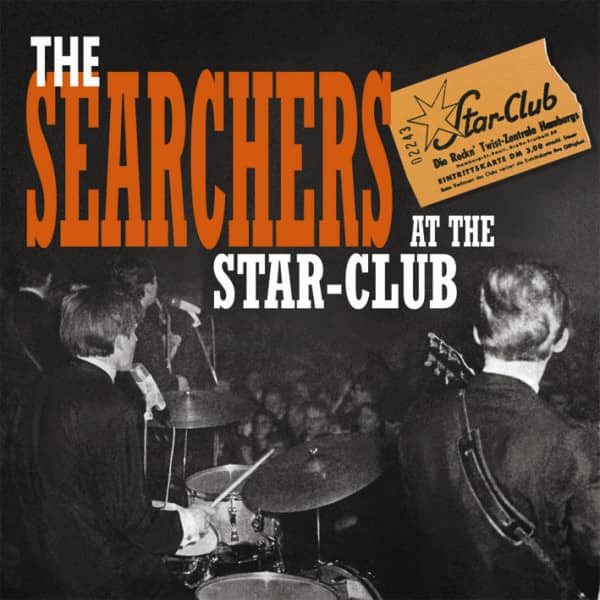 The Searchers: At The Star-Club

1-CD with 28-page booklet, 19 tracks, playing time 45:16 minutes.
The Star-Club’s 40th anniversary celebrated on three sensational new CDs!
On April 13th, 1962, the now legendary Star-Club was opened in Hamburg’s red light district, St. Pauli. Forty years ago the Hamburg clubs cooperated with another sea port, Liverpool, to bring international stars to Germany. In Liverpool, another new band was launched every week, and most of them didn’t try their luck along the River Mersey but along the Elbe! They came to Hamburg where they had to play several hours a night, seven days a week. It was a hell of an apprenticeship!
In 1964, the Star Club launched its own record label, but, prior to that, three bands from Liverpool’s early days got the chance to record singles, EPs, even albums.
HOWIE CASEY & THE SENIORS
THE SEARCHERS
THE MERSEYBEATS
Now, with the Star-Club’s 40th anniversary, these fabulous, highly sought-after recordings are available again in excellent sound quality, packaged in original artwork, boasting very rare or unreleased bonus tracks!
HOWIE CASEY. This ace sax blower started his long career in Liverpool back in 1959 with Derry & The Seniors. In 1961, he began fronting the Seniors, and the following year his first (and sole) album came out: an explosive mixture of Beat, Rock 'n' Roll and Twist, laid down by an excellent band with tremendous soloists. Casey spent a long time on Hamburg stages and even now is still an outstanding session musician. He has played for Paul McCartney among many others. The new Bear Family CD – Howie Casey's first after more than 40 years in the biz – presents the wild man at his wildest. It includes his complete original Fontana/Wing album (featuring the smashes Bony Moronie and the Boll Weevil Song), two extra tracks culled from singles and two previously unissued archival finds.
THE SEARCHERS. Founded in the late '50s to back the now forgotten Johnny Sandon, this Liverpudlian foursome first played the Star-Club in July 1962, and made their 19 Philips recordings on March 1, 1963. Soon after they signed with PYE in England and went on to score many pop and folk-rock hits. This, though, is the rawer side of the Searchers. Hard, pounding beat music. All the Philips tracks are on this brand new CD: one original album, A&B sides of the singles, plus a miscellany of songs strewn around on compilations. Here are all the early Searchers classics like Sweets For My Sweet, Ain’t That Just Like Me, Sweet Nothin’s, Beautiful Dreamer, and many others.
THE MERSEYBEATS. Pulled together from the remnants of two amateur Liverpool bands, the Mavericks and the Pacifics, the Merseybeats are still active these days – with forty years of touring behind them! Bear Family’s new Merseybeats anthology is a smash and, for the very first time, boasts all 31 tracks the band has ever recorded on a single compact disc! Included are classic early works such as Fortune Teller and Mister Moonlight, UK chart successes like I Think Of You, It’s Love That Really Counts and Wishin’ And Hopin’, and even a couple of highly sought-after German-language ditties Nur unsere Liebe zählt and Nur du allein which are worth a fortune these days!

Article properties: The Searchers: At The Star-Club

Learn more about The Searchers
The Searchers, named after the John Ford movie, were sec-ond only to the Beatles on Merseyside... more
Close menu
"The Searchers"

The Searchers, named after the John Ford movie, were sec-ond only to the Beatles on Merseyside in terms of musician-ship and local popularity. On their signing to Pye in 1963, the line-up was Mike Pender, lead guitar (born Mike Prender-gast, March 3, 1942), John McNally, rhythm (Aug. 30, 1941), Tony Jackson, bass (July 16, 1940), and Chris Curtis, drums (Aug. 16, 1941). Their first single, the Drifters' `Sweets For My Sweet' went to No. 1 and featured the high-pitched, light harmonies that became the group's trademark. Other covers of American hits followed and were equally successful : Jackie De Shannon's 'Needles And Pins' (written by Jack Nitzsche and Sonny Bono), the Orlons"Don't Throw Your Love Away' and 'When You Walk In The Room', another De Shannon hit.

The Searchers were also regular visitors to the American Top Twenty on the Kapp label, and their combination of tight harmonies with jangling guitars anticipated the sound of the Byrds. By 1965, how-ever, their lack of original songs for singles was becoming a liability. Two folk/protest numbers (Malvina Reynolds' `What Have They Done To The Rain' and P. F. Sloan's `Take Me For What I'm Worth') barely scraped into the Top Twenty and Jackson left to be replaced by Frank Allen from Cliff Bennett's band. In 1969, the Searchers lost Curtis who tried a solo career briefly and then went into production. By this time they were establishing themselves on the cabaret circuit, like many of their fellow-Mersey groups.

Review 1
Read, write and discuss reviews... more
Close menu
Customer evaluation for "At The Star-Club"
From: Bernd Korehnke On: 7 Dec 2018

Write an evaluation
Evaluations will be activated after verification.
Weitere Artikel von The Searchers
Hint!
The Searchers: When You Walk In The Room (CD) Art-Nr.: CDSI64705