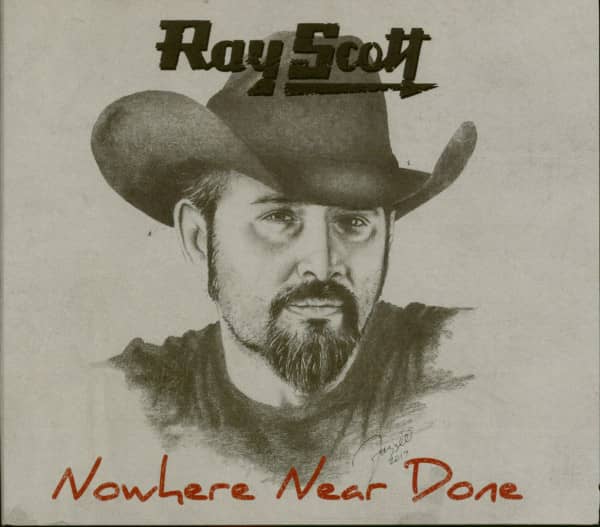 2020 marks fifteen years since Ray Scott first burst upon the scene with his debut album My Kind of Music.  Call it an anniversary or a milestone if you will.  In some ways, a lot has changed since then.  In others, not much has changed at all.

What’s the same?  He still comes fully armed with that signature muscled, baritone voice that swings so low it scrapes the top of your boots as it sends a shiver down your spine.  He’s still as hardcore country as he ever was and he’s still making his kind of music.

What’s changed in the decade plus years since he parted ways with his record label and went out on his own?  His voice has gotten stronger, his songs punch harder and he’s having a helluva lot more fun these days.

In short; he’s better and more successful than ever before.

Nowhere Near Done isn’t just the name of Ray Scott’s latest EP, it’s a statement.  A statement to anyone who ever wrote him off, forgot about him or even worse, thought he might wither away.

“I’ve gotten better,” says Ray with an air of confidence, not cockiness.

“I feel like I’m way more in touch with what my audience likes and what they expect out of me.  They expect a little bit of wit.  They expect me to say things a little bit differently.  I give them something they’re not used to hearing from everybody else and that’s been my niche from the very beginning.”

If that’s his niche, then Nowhere Near Done fits that bill to a tee.  As a collection these six songs will reach right through your speakers and in one way or another, punch you square in the heart.  Individually they’ll make you dance; make you cry or make you push down so hard on the gas pedal you could very well end up with a speeding ticket on your way home.

It only takes the first two songs, ‘Bottle of Whiskey’ and ‘Better as I Go’ to showcase Ray’s elite songwriting skills.  Not afraid to bare his soul and own up to his real-life transgressions, both are open and honest admissions about losing one wife to divorce and wanting to be a better man for the next. Ray might be the one brave enough to sing those things out loud, but Lord knows thousands of us in the audience know those same mistakes all too well.

“Both of those songs are deeply personal and very real to me.  You can’t write a song like ‘Bottle of Whiskey’ any other way, it only works if it’s based in reality.  I wrote it from the perspective of the whiskey talking to me, but people relate to the emotion of it. ‘All those years that you spent drunk, back when you lost your wife. I was there but man that was your fault, it damn sure wasn’t mine.  I didn’t hold a gun to your head and pour myself in you.  You just loved me more than her and you know that’s the truth.’  That really kicks some people in the gut.  I knew what I was saying when I wrote that down.  I was talking to myself but after the fact, I realized a lot of people have been there too.”

That’s not to say there isn’t fun on this EP.  If you catch him live there isn’t a chance in hell ‘Big Ol’ World’ won’t fill the dance floor in a heartbeat and ‘I Will’ will have every beer in the joint hoisted high in the air.  Twice.

That’s the beauty of Nowhere Near Done and the bigger body of work Ray Scott has created over the years.  Songs like these attract a different kind of audience.  You won’t find the here-to-be-cool generation.  Ray’s music resonates with real country fans that love authentic emotion, fun or sad, and are tired of being choked with fluff.

“I grew up on country music that was deep rooted, gut wrenching and moved me enough to want to do this for a living.  It was about adult shit and that was the beauty of it.  That was the art of it.  It was somebody taking their heart, ripping it out and laying it on the table for everyone to see.  For the most part, I don’t hear that on what passes for country radio these days.”

Thankfully, these days artists aren’t forced to play that corporate game and shill the fluff they’re told to record.  With the power of social media, streaming services and satellite radio, the doors have been blown wide open.  Artists can create the music they want and if they’re willing to work hard, they can carve out a nice career.  Ray is no stranger to hard work so when you couple that with his musicianship, he’s not only still here fifteen years later, he’s still growing.

“Early this year, I had a four-show run in the Midwest where three of those markets were places I’d never played before.  Where did those fans come from?  Some came because I’d never played close enough for them to get to a show but also, Spotify.  That’s been huge because people do discover me by listening to the Jamey Johnson station or on Pandora or whatever.  Or they listen to Ward Davis, a great artist who at one point was my keyboard player.  Some people will hear him first and then Ward will mention me in his show because he plays some of my songs.

“People discover music all different kinds of ways now and to be honest, it’s a little bit sweeter.  It’s almost an underground thing that happens.  Someone doesn’t just hear me on the radio because that’s what’s on the radio, they discovered me because some fan of mine said ‘…you’ve got to hear this’ and that to me is much more passionate.”

The growth isn’t limited to American honky tonks either.  At this point, Ray Scott has gone global.

“I’ve been performing overseas for about eight years now and on average, I make at least two trips a year.  I’ve had some chart successes in the UK and have had a lot of opportunities to go play.

“Country music is an original American art form to Europeans.  They either love it or they don’t want to have anything to do with it, but the ones that love it are all about it.  Just being an American country artist has some panache about it with a lot of those folks.  Now if you’re someone who they’ve gone to see and became a fan of, then it becomes a whole different story.

“I always enjoy going overseas and every time I go to Europe, I’m still breaking into new markets.  This year will be my first trip to Austria.  The Zurich / Switzerland gig is one I’ve done a few times before.  It’s a huge festival that’s been going on for thirty years.  I tell people I may be the poorest world traveler you’ve ever met because a lot of these places I’m going, people save up for years to travel to.  I’m lucky enough to call it work.”

To hear Ray talk about the road, the future and the songs that make up Nowhere Near Done it’s obvious he’s more invigorated than ever.  It’s almost impossible to believe but the proof is in the songs; as a songwriter, as a singer, and as an artist Ray Scott is just now starting to hit his stride.

“I don’t feel like I’m losing a step.  In fact, I feel like I’m entering into a sweet spot of knowing who I am a lot more these days and how I want things to be.

“There has always been this thing with artists that if you have a record deal and lose it, all of a sudden, your relevance goes out the window.  People write you off.  I’ve seen a lot of situations where artists hit their sweet spot long after that has happened, but nobody is paying attention to them anymore.  You don’t drink the wine until the age has set in unless you don’t like the good stuff, do you?  Pay attention.  Give it a chance.  Give things a chance to mature into what they’re meant to be.”

Memphis singer/songwriter Ray Scott is assured of eternal recognition in the rockabilly Hall of Fame as the composer of Billy Riley's Flyin' Saucers Rock 'n' Roll. He also saw his name on several small Memphis labels, including an early Satellite (soon to become Stax) release, and composed one side of Thomas Wayne's first Fernwood record - the rocker You're The One That Done It.

As these two demos reveal, however, Scott's heart was a lot closer to the country side of rockabilly. On these sides, which have remained unissued in the Sun Vault for 45 years, we have the original demo of Tonight Will Be The Last Night, a song he managed to place with Warren Smith. Smith's version, cut in 1956, remained unissued until the golden era of rockabilly archaeology in the 1970s. I'm Gonna Make You Love Me fared less well and has remained unrecorded (by others) and unreleased until now.

It's a stone country song in a style that would have been at home on a Hank Williams session, but also features the kind of rhythmic energy that pointed the way to rockabilly. The melody is quite catchy but the song is undercut by some awkward rhymes. Scott paints himself into a lyrical corner when he chooses to use "hug my neck" as a payoff line for "bottom of the deck." Material like this, despite all its rural charm, was not going to thrive in the country or rockabilly marketplace in 1956. If anyone could get away with such hackneyed rhymes it was Elvis, which is precisely what the King did two years hence. "Won't you wear my ring / around your neck / to show the world / I'm yours by heck." 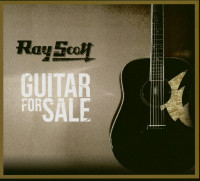 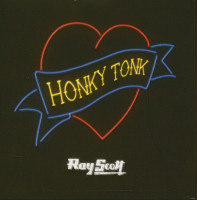