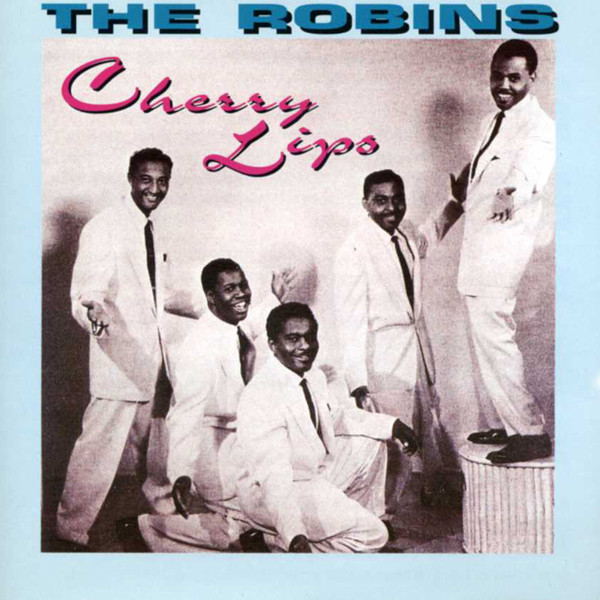 CD on DESPO CD RECORDS by The Robins - Cherry Lips

Learn more about The Robins
The Robins Smokey Joe's Café Things were finally going The Robins' way, thanks... more
Close menu
"The Robins"

Things were finally going The Robins' way, thanks to the songwriting and production of Jerry Leiber and Mike Stoller. In 1951, the Los Angeles group had the first Leiber/Stoller copyright to make it to wax. Adding tenor Carl Gardner to the ranks in 1954, shortly before The Robins signed with Leiber and Stoller's fledgling Spark label, hadn't hurt either.

Jerry and Mike gave The Robins Riot In Cell Block #9, Richard Berry guesting as the hard-nosed prisoner (it's on our previous disc). After that, founding bass singer Bobby Nunn handled the courtroom saga Framed, out on Spark with the Gardner-led flip Loop De Loop Mambo in the fall of '54. The rest of the group remained tenor Ty Terrell and brothers Billy and Roy Richard as tenor and baritone.

Spark issued more memorable Robins singles from Leiber and Stoller's prolific tandem pen in 1955. Tenor Grady Chapman returned to front a swinging Whadaya Want? and then an upbeat treatment of I Love Paris so outrageous that Cole Porter's publisher forced it off the market. Gardner led a raucous I Must Be Dreaming (its flip was a double-entendre The Hatchet Man, featuring a leering Nunn). Then came the hilarious theme that restored The Robins to prominence.

Cut around the end of 1954 or the beginning of '55 at Master Recorders in L.A., Smokey Joe's Café was another humorous Leiber/Stoller vignette. Jerry crafted the ominous tale around a real-life greasy spoon at Beverly Boulevard and La Cienega, describing unrequited love over a bowl of chili beans served by a jealous cook. Gardner delivers it with perfect comic timing, saxist Gil Bernal holds the intro note to his salacious solo for an eternity, and Barney Kessel's back-alley guitar adds the bluesy connecting riff on the breaks.

Out on Spark in August with a Gardner-led ballad, Just Like A Fool, on the B-side, it might have only made a West Coast splash had Atlantic's Nesuhi Ertegun, knocked out by the song and Spark's catalog, not introduced Leiber and Stoller to his cohorts. Atlantic picked up Smokey Joe's Café and put it out on its new Atco imprint that October. It climbed to #10 on 'Billboard's R&B 'Juke Box' list and #79 pop. Atlantic brought Leiber and Stoller aboard as independent producers. But The Robins split down the middle when Jerry and Mike spirited Gardner and Nunn away to form The Coasters.

"I stayed with the Robins for a year or two, and I decided that I had to get out of the Robins 'cause it didn't appear to be going to hit the road quick enough," said the late Gardner. "So I got out of the group with the help of Jerry Leiber and Mike Stoller."

The rest of the group didn't care to relocate to New York, signing with deejay Gene Norman's L.A.-based Whippet label as baritone/bass H.B. Barnum replenished the ranks. The Robins made a number of singles for Whippet, Knight, Arvee and Lavender without much success (Chapman was supplanted by future Phil Spector tenor Bobby Sheen in 1958). Meanwhile, The Coasters were poised for stardom.