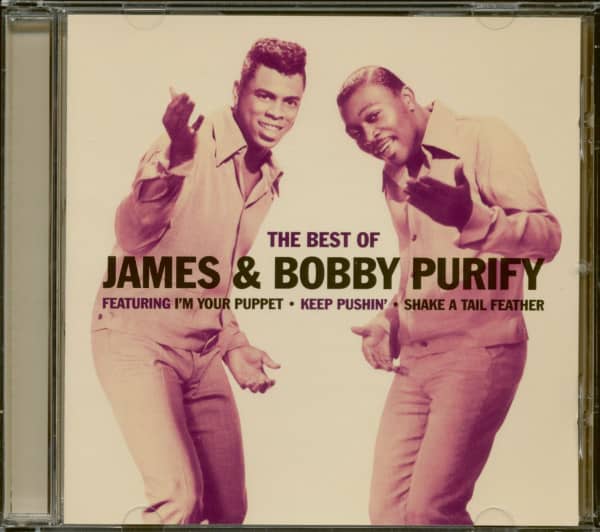 Despite their brotherly billing, James & Bobby Purify weren't related by blood—just their shared soul. James Purify was born May 12, 1944 in Pensacola, Florida, while Robert Lee Dickey was a Tallahassee native, born September 2, 1939. "I started with a band in 1959,” says Bobby. "Just a little house band that didn't have no name.” Bobby joined the Dothan Sextet in 1963, James coming aboard in '65. "Mighty Sam came before James did,” said Bobby. "He sung with us, I guess about a year or so.”

Papa Don Schroeder, a Pensacola deejay on WBSR and a singer with 45s on Vee-Jay and Philips, discovered the pair. "(Mighty) Sam McClain and I went to Tom's Tavern, and I heard the Dothan Sextet. And James Purify was the lead singer, and Robert Lee Dickey was the guitar player,” says Papa Don. "I said, 'Look, man, I'll sign both of you guys. I want to do two sides on you, and two sides on you. Let's go to Muscle Shoals!'” Organist Barry Beckett came along for the ride, but no one brought any fresh material. Schroeder dug through boxes of demo tapes that Rick Hall kept on hand at his Fame Studios. "A couple of hours later, Papa Don came down from upstairs and said, 'I got one here!'” says keyboardist Spooner Oldham. What he'd unearthed was I'm Your Puppet, penned by Spooner and writing partner Dan Penn, whose own version had come out on MGM in 1965. James and Bobby were none too enthusiastic.

"I don't think either one of 'em liked the song from the get-go,” says Schroeder. "Dickey just couldn't get it, man. He was trying to sing lead. I was trying to get a real soulful guy to do 'I'm Your Puppet.' James Purify said, 'Hey, man, here's what he's talking about!' He started doing the lead. I said, 'Dickey, do the harmony!'” A new duo was born. Papa Don called Bell Records boss Larry Uttal in New York to rave about his latest act. Uttal inquired as to their name. "Purify, I thought was the funkiest soulful name I ever heard in my life,” says Schroeder. "I named 'em James & Bobby Purify on the telephone, talking to Larry Uttal.”

The gentle yet insistent I'm Your Puppet ended up a #6 pop and #5 R&B smash on Bell. Plenty more hits by the pair followed: Wish You Didn't Have To Go, Shake A Tail Feather, and Let Love Come Between Us in '67 and Do Unto Me and Help Yourself (To All Of My Lovin') the next year, all produced by Schroeder in either Muscle Shoals, Memphis, or Pensacola. Bobby left towards the end of the Bell tenure, and James proved so unreliable that Papa Don called it quits. "I had to walk away from him,” says Schroeder, who nonetheless reconciled with James during the mid-'70s to reform the duo with Ben Moore, formerly of Ben & Spence, as the new Bobby. The Purifys made albums for Casablanca and Mercury before going their separate ways once more.