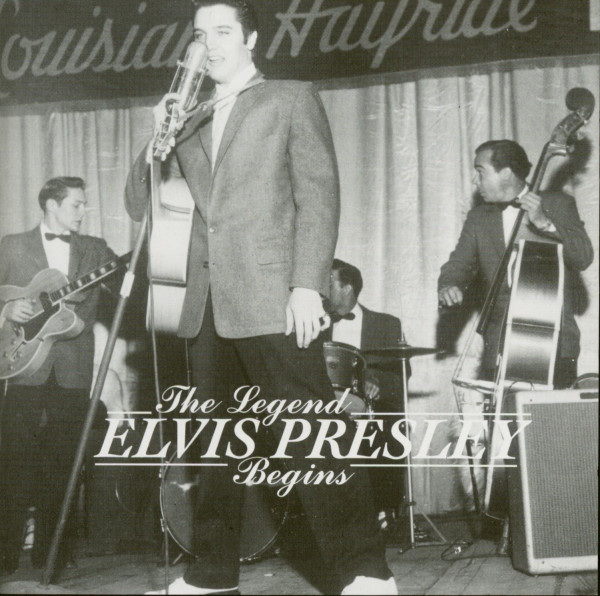 (Magnum Force) 18 tracks (54:31)
The recent release of Elvis's complete fifties master recordings of BMG's prestigious five compact disc set heralded a new era for Presley fans. After a tortuous period of time in which every aspect of his private life was subjected to intolerable scrutiny - often most unfairly and inaccurately - he has been re-established, unequivocally, as the pop icon of the fifties - if not of all time - and remembered for the only thing that really matters: his music.

Timely then to re-visit some lesser known versions of his fifties repertoire. And with the exception of Tweedlee Dee' and `Maybelline', none of these versions ap-peared on BMG's magnificent set. So al-though none of these songs will be new to long-term fans, it is pleasing to have them collected together on one album, repre-senting the 'live' Elvis Presley show; re-member, by all accounts even his wild an-tics on various television shows were rela-tively tame compared to his live concert shows. Close your eyes and you are there!

Appropriately, first up are the two songs which constituted his first Sun single, 'That's All Right' and 'Blue Moon Of Kentucky', recorded on his debut appearance on the Louisiana Hayride on 16th October, 1954, barely two months after he had cut the songs at Sun Records in Memphis. Next up is his fun version of `Tweedlee Dee', an-other Hayride recording, this time from Gladewater, Texas. Most sources quote 18th December 1954 as the recording date, but other evidence points to the later date of 30th April, 1955. Whatever the truth, it's a great toe-tapper, featuring a young pianist -Floyd Cramer - who was to go on to supple-ment Elvis's studio band on countless occa-sions thereafter. Incidentally, Elvis never cut a studio version of this song.

Most of Elvis's time during 1955 was spent touring all over the South. While at the Eagle's Hall, Houston, Texas, in March 1955, we hear Elvis performing five songs with a lovely version of 'Good Rocldn' Tonight' (his second Sun single) and 'I Got A Woman' (as yet not committed to tape in the studio) the Ray Charles number which was a common feature of Elvis's live shows right up to 1977.

We then move to August 1955 - either the 16th or 19th of the month - where in Shreveport, the home of the Hayride, the next two songs were recorded: 'Baby Let's Play House' (his fourth Sun single) followed by Chuck Berry's tongue-twister, 'Maybelline', a song tailor-made for the young, car-obsessive Elvis. With minimal backing he carries this song along like a ...Cadillac doing about ninety-five...' Once again Elvis never recorded this one in a studio, so it's the only known version in existence, and is followed by an encore of `That's All Right'

By the time the next few songs were recorded, Elvis had been signed to RCA Victor, was under the influence of Thomas Andrew Parker, had a nationwide number one hit, had auditioned for the movies, ap-peared in Las Vegas, and was a household name throughout the USA. But as these seven songs from his May 16th, 1956 appearance in Little Rock, Arkansas testify, all this activ-ity had not slowed down or diminished Elvis's verve for life shows.

Listen as he storms through 'Heartbreak Hotel', Little Richard's classic Rocker 'Long Tall Sally' (pre-dating his September,1956 studio ver-sion) and then croons a wistful 'I Was The One', the 'B' side of 'Heartbreak Hotel'. Next up is Jesse Stone's 'Money Honey', followed by another version of 'I Got A Woman', both of which had been recorded during his first session for Victor on January 10th, 1956. Then it's into Carl Perkin's 'Blue Suede Shoes', before closing the show with a rousing 'Hound Dog', done very similarly to his bump-and-grind version - complete with slowed down ending - as featured on the Milton Berle TV Show on June 5th, 1956.

Once again this performance pre-dates his studio version which was not committed to tape until July 2nd, 1956 at RCA's New York studios. And that's it, folks! One final point though. When listening to these tracks just remember this: the core of this sound was produced by three or four people - Elvis, Scotty, Bill and latterly, drummer D.J. Fontana, using the most primitive form of sound system. And yet, so many years on, it is remarkable just how good they sounded. The legend began and the legend lives on... (Gordon Minto, October 1992)

(January 8, 1935, Tupelo, MS – August 16, 1977, Memphis, TN)
Elvis Presley (full name Elvis Aaron Presley) is the most outstanding personality in showbiz ever since, and the most popular entertainer the world has ever seen! His musical influence within music history and its following generations of musicians is still unbroken. His huge 'Blast-Off' in the mid-1950s, the rising star from a simply called 'Hillbilly Cat' (at Sun Records) to a lascivious Rock'n'Roll singer with charisma, a male sex symbol (then at RCA Victor) soon popularized him as "The King of Rock'n'Roll" or simply "The King".
His first cut within his tremendous career happened between October 1958 and March 1960 while Elvis was on duty with the U.S. Army and stationed in Germany. It was there in 1959 when he met his later wife Priscilla Beaulieu at age 14. Elvis and Priscilla married on May 1, 1967 in Las Vegas (divorce in 1973). Elvis evolved into an all-around entertainer after his Army service and started starring in Hollywood films. 33 movies in total, including the two concert documentaries 'That's The Way It Is' and 'On Tour'. He again shook the world with his 1968 NBC Comeback TV Special after his movie period without any stage appearances.
This TV special included the first ever unplugged session presented together with musicians from the early days such as Scotty Moore and D.J. Fontana. 1973 saw THE TV mega event at all: Elvis Presley, 'Aloha From Hawaii via Satellite'! Elvis' Honolulu appearance, the first time that a show was broadcasted worldwide via satellite! He was ahead of his time! Elvis Presley had 148 US single chart hits, including some so-called double-sider when A- and B-side both hit the charts like his 1956 smash 'Don't Be Cruel b/w Hound Dog', plus 15 EP hits between 1956 and 1977. Two billion of sold media and sound carriers by Elvis Presley is the estimated number! He received 14 Grammy nominations until 1978 and three Grammy for his Gospel interpretations. Elvis was the youngest artist when honored with the Bing Crosby Award (Lifetime Achivement Award) in 1971.
He is presented in 5 Halls of Fame (Rock'n'Roll, Rockabilly, Country, Blues and Gospel). Six of his song interpretations are collected in the Grammy Hall of Fame. On top of it all Elvis Presley got the most gold and platinum records and a Diamond-Award. He definetly is the 'Best selling solo artist in U.S. History' (RIAA – Record Industry Association of America)! Elvis Presley CD albums, vinyl records as LPs or singles at 45rpm - Bear Family offers a huge number of various Elvis Presley CDs, vinyl-LPs and 45rpm singles, vinyl- and CD box sets, books and mags, DVDs, unique and extraordinairy memorabilia! Let's say it in the words of one of Elvis sixties album title: There is "Something For Everybody"! And hey, you name it! Elvis Presley is the King of Rock'n'Roll, the biggest icon in showbusiness, and a great person who lives on forever!
Bear Family Records treats his legacy with the most respect and an optimum capacity of expert knowledge.
Review 0
Read, write and discuss reviews... more
Close menu
Customer evaluation for "The Legend Begins (CD)"
Write an evaluation
Evaluations will be activated after verification.
Weitere Artikel von Elvis Presley
Hint!
Elvis Presley: The Pot Luck Sessions (5-CD) Art-Nr.: CD975160