One of the most amazing events in the history of the record business happened this week. You've probably heard it - Tim-Tayshun, sometimes called Temptation - by Red Ingle and his Natural Seven. Released nationally on May 19, it was a major hit within 48 hours, and it's still growing. It's one of those laugh riot musical hits that caught the fancy of the American sense of humor overnight. If you haven't heard it, where have you been this week? 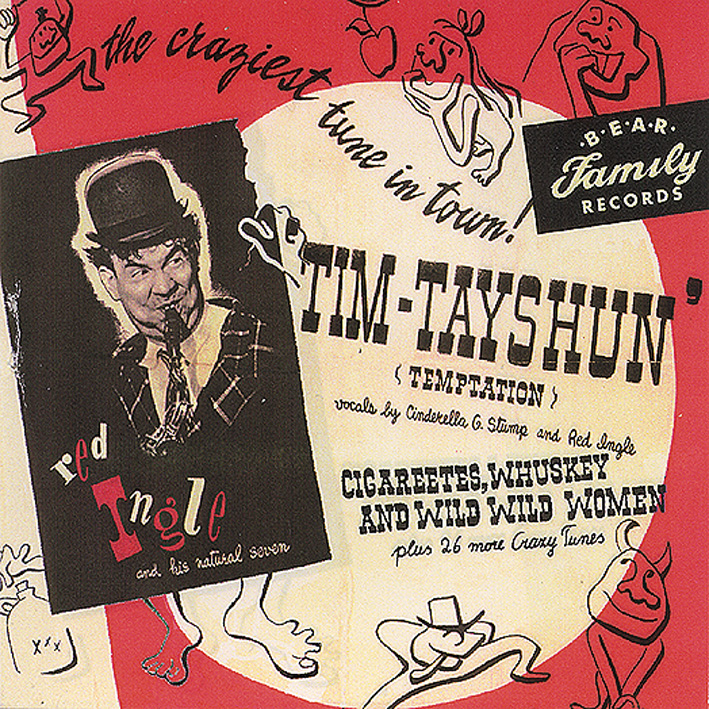 Ernest Jansen Ingle was born November 7, 1906 in Toledo, Ohio, the seventh and youngest child of Ernest Lincoln Ingle and Nella Mae (Jansen) Ingle. Two of the Ingle children died in infancy; three girls and two boys survived. Like his older sister Nita, young Ernest inherited his mother's bright red hair. As with everything else in his life, Ingle's lifelong nickname came naturally.

Although his family operated a farm near Napoleon, Ohio, Ingle was raised in Toledo, where his father managed the Tiedke Department Store. The Ingle children were surrounded by the arts. Nella Mae Ingle was a skilled painter and organist, and she encouraged her children to pursue similar interests. Red showed an early aptitude for both art and music. According to a 1940 NBC press release, he was already making people laugh at his songs by age four. When he began taking violin lessons, his education was bolstered by encouragement and bowing tips by acclaimed Viennese virtuoso Fritz Kreisler, who often stayed with the Tiedke family while on his American tours. Ingle also was fascinated by the square dance fiddlers he heard during his weekend visits to the family farm. He quickly learned many of the tunes and tricks used by the area's best fiddlers.

While playing violin in his high school orchestra, Ingle began seeking new musical challenges. After acquiring a C-melody saxophone from a cousin, Ingle began dabbling in reeds, according to Don Ingle, Red's son and a respected jazz trumpet player. "He later traded it for an alto sax and began to play with local orchestras like Al Amato's Green Mill Orchestra in Toledo," he said. "Red's solid musical foundation allowed him to excel on sax and clarinet."

Ingle also took on another lifelong interest while in high school: aviation. In 1924 he landed a summer job clearing land and draining swamps during Florida's land boom. While working near an airfield, he persuaded a local cropduster to give him flying lessons.

At age fifteen, Ingle won a scholarship to the Toledo American College of Music. He continued playing with local dance bands during the school year and summers at Michigan lake resorts. His 1925 ensemble featured jazz piano great Joe Sullivan, future bandleader Gray Gordon on sax and George Wettling on drums.

After marrying Edwina Alice Smith in June 1926, he decided to abandon his studies to pursue a full-time career in music. That fall he headed south to lead the Kentucky Kernals, a Paul Whiteman-affiliated territory band that featured young Claude Thornhill on piano. By year's end he was in Detroit, where he signed with Jean Goldkette's stable of bands.

A skilled entrepreneur with an eye for talent, Goldkette sought well-schooled jazz players for his Detroit-based Greystone Ballroom orchestra; by the time Ingle came aboard, Goldkette fronted a nationwide network of more than twenty bands. Initially working with some of Goldkette's smaller groups, Ingle joined the Greystone Orchestra in late February 1927. His bandmates included cornet legend Bix Beiderbecke and sax player Frankie Trumbauer, who shared Ingle's passion for flying.

At that time the Goldkette Greystone Orchestra was one of the era's tightest, hardest-swinging bands; its only comparable rival was Fletcher Henderson's orchestra in New York. Bill Challis's imaginative arrangements and Steve Brown's slapped bass propelled the band into exciting musical territories.

Ingle remained at the Greystone for a month, toured with smaller Goldkette bands through the spring, then rejoined the Greystone unit on May 29 for a four-week engagement at Cincinnati's Castle Farms. It was his last tour with the classic Goldkette ensemble. Mired in debts and a top-heavy payroll, the Greystone unit disbanded that September. Paul Whiteman quickly recruited Challis and many of Goldkette's key Greystone musicians, invigorating his popular but rhythmically stodgy orchestra.