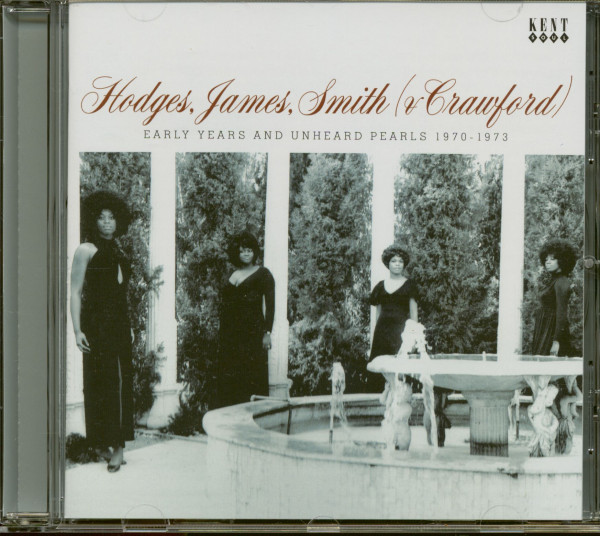 (Ace Records)  21 Tracks
Hodges, James, Smith and often Carolyn Crawford were so soulful in their early years – these unreleased gems will cement their fine reputation.

Hodges, James, Smith (& Crawford) are one of the last great 70s girl groups to be compiled. The reason for the strange billing is that they were formed in 1970, had a release as Hodges, James & Smith, then as Love ‘N’ Stuff. Ex-Motown starlet Carolyn Crawford joined in late 1971 for two singles before departing amicably in late 1972, leaving Pat Hodges, Denita James and Jessica Smith to continue as a trio.

The early 45s are excellent and have long been admired, but the tracks found in the vault are superb and make this a must-buy for lovers of the girl soul group sound. Highlights include the two M’Pingo 45s when they were a quartet and the unissued dancers ‘Wishful Thinking’, ‘What Made You Think’, ‘Nothing Special In You’ and the sexy ‘In My Fantasy’. Pre-release plays of these at the 100 Club and on On-liners have been very well received indeed.

The girls were also great purveyors of powerful ballads such as in ‘Baby My Love Is Showing’, ‘I’m A Woman’ and ‘Never Meant To Be’. The songs and production are from Mickey Stevenson, Clarence Paul, Ronnie McNeir, Leon Ware, Ernie Shelby and other talented musicians from the Detroit and Los Angeles scenes of the early 70s.

Writers Rudy Calvo and A. Scott Galloway have conducted new interviews with Mickey Stevenson, Pat Hodges, Carolyn Crawford and Ronnie McNeir to tell the full story in the CD package. Carolyn Crawford has also supplied the only known photos of the group as a foursome.