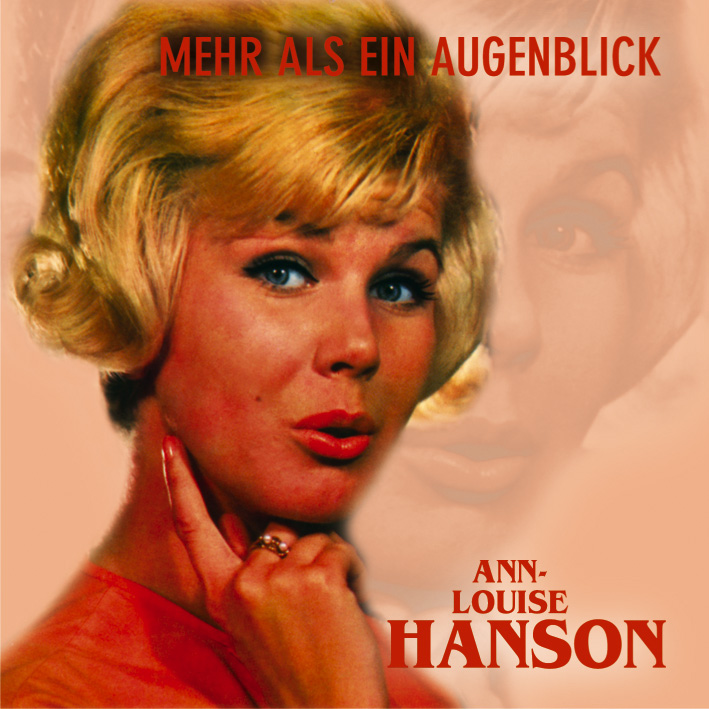 Ann-Louise Hanson
More than a moment
"The girls from Sweden are sweet and chic and very charming," Ann-Louise Hanson claimed in 1969 in one of her hits. To believe her, you just had to look at her: blond hair, blue-green eyes, beautiful - a Swede like in a brochure. But she also proved that she didn't just look nice. Otherwise she would hardly have managed to hold her own in show business for more than 40 years.

Ann-Louise Hanson, born on 4 April 1944 in the provincial capital of Kristianstad in southern Sweden, comes from a musical family and has always loved singing since childhood. At the age of six she was already performing with her somewhat older brother, who plays the accordion, at a police festival in the concert hall of her hometown.

From now on it is her dream to become a singer, and therefore she later takes part in various competitions for young singers. In 1959 she sings all the other applicants to the wall at such an event. However, because it turns out that she is only 14, she cannot be won, because the minimum age for the participants is 18.

After all, the story makes headlines and brings her her her first TV engagement in Malmö. There, the talent scout and hit manager Börje Ekberg, who is known in Sweden for his nose for talent, also looks after Siw Malmkvist. He gets Ann a record deal with the Swedish metronome. Soon thereafter she was engaged as a singer by the renowned orchestra conductor Anders Burman. After several releases she had her first hit in 1961 with the Swedish version of Are You Lonesome Tonight. Soon she will be so popular in her home country that we will also show interest in her.

At this time Siw Malmkvist is very successful with her records for the German metronome. Their producer Günter Henne also wants to bring out Ann-Louise in Germany and takes her on board. A ship sailed to Santiago de Chile, one of those sentimental sailor hits that were extraordinarily popular at the time. With this the Swede should make her debut on the German record market. But then you have to make new arrangements, because at the beginning of 1962 the metronome suddenly finds itself confronted with an unexpected problem: The Danish singing couple Nina & Frederik nominated by the company for the'German Schlager Festival' is cancelled at short notice. I need a replacement as soon as possible. The choice is Ann-Louise Hanson, who immediately agrees to step in. A hard piece of work, as she has to rehearse the two titles for the preliminary decision within a few days.

On February 2, 1962, she made her first television appearance in Germany in the last of a total of four preliminary rounds.

In the final round on 17 February, in which Conny, Siw Malmkvist, Margot Eskens and Pirko Manola & Wyn Hoop, among others, will take only one of the rear places with Sing, little bird, but wins the sympathy of the TV viewers right away. The sweet seventeen-year-old sings with a lot of heart. And with a touch of accent, barely perceptible, but perhaps for this very reason particularly attractive. That goes down well with the German audience. Her competition title can be placed in the hit parade for two weeks, which has definitely paid off for her participation in the Schlager Festival.