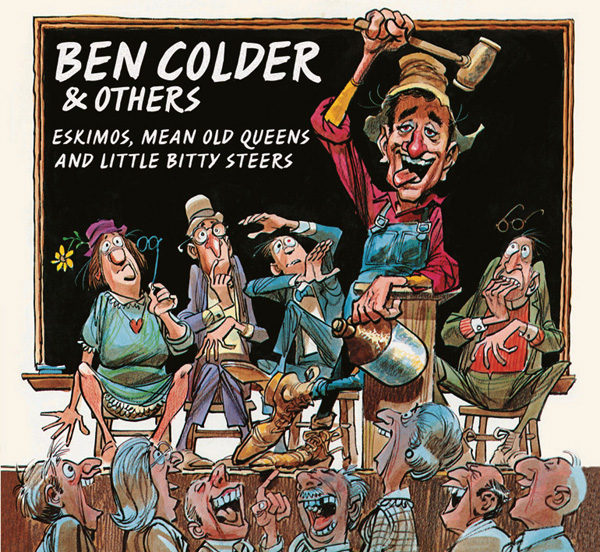 Country music has a long tradition of sequels, answer-songs, and parodies. As far back as the Twenties and Thirties, any successful song would immediately spawn a number of sequels, usually prefixed by Answer to… or suffixed by …No.2. By the Forties and Fifties, this had expanded to humorous parodies, many of them taking their cue from Red Foley and Ernest Tubb's Tennessee Border #2 … a big hit in 1948. Perhaps no one was more adept or successful at parodies and answer songs than Sheb Wooley. Although he often played heavies in the movies (Ben Miller in High Noon) and on television (Pete Nolan on Rawhide), he established his gift for comedy with the Number One pop smash, Purple People Eater, in 1958. Four years later, his alter ego, Ben Colder, took it up a notch.

Sheb Wooley’s long and illustrious career has been exhaustively covered by Bear Family, first on two now-deleted LPs, and more recently on 'Rawhide/How The West Was Won' (BCD 15899 AH), ‘Purple People Eater’ (BCD 16149 AH), ‘Wild And Wooley/Big Unruly Me’ (BCD 16150 AH), and finally on a definitive 4CD boxed set, ‘That’s My Pa’ (BCD 15902-DI). In terms of biographical material, there’s little left to add to this final chapter in the Wooley story, except perhaps to recount how Ben Colder came into existence.

"Jim Vienneau was my producer at MGM," Sheb recalled recently. "Jim lived in New York and I was working in Los Angeles shooting 'Rawhide.' He found ' Don’t Go Near The Indians,' and thought I should record it. A woman in Nashville had written it, but I was locked into the shooting schedule and couldn't get into Nashville. By the time I got to town, Rex Allen had cut it, and it became a big hit. Jim and I were having dinner one night and he said, 'You big dummy, you missed a hit.' I said, 'Jim, don't worry about it. He did 'Don't Go Near The Indians.' I'll do 'Don’t Go Near The Eskimos.' He said, 'How does it go?' and I started singing it. The next morning, Jim said, 'You know that might be an idea. Do a parody on 'Don't Go Near The Indians.' Maybe we can get half the sales…three hundred thousand, half-a-million. I went back to California and forgot about it. Little while later, Jim called me and asked where it was. He said, 'That Rex Allen thing is close to a million. We should do it.' I said I'd write it on the plane on the way to Nashville. That's exactly what I did. I played it for the girl who wrote the original and she loved it. Vienneau loved it. We recorded it, and Vienneau wanted it out right away. I had a record just released as Sheb Wooley. I can't even remember what it was. Jim said we needed another name, so because it was about Alaska I sent him three names, Klon Dyke, Ben Freezin, and Ben Colder, and he picked Ben Colder, and it became a hit."  A Number 18 hit, to be exact.

Just as Don't Go Near The Eskimos peaked in December 1962, Sheb returned to Nashville to cut the first Ben Colder album, 'Spoofs The Big Ones.' "Jim said we needed an album," remembered Sheb. "I said, 'Eleven more parodies?' and he said, 'That’s right.' So I sat down and did it." Over the course of the next ten years, Ben Colder began assuming his own personality. He was the lovable drunk, and sometimes the not-so-lovable drunk. He was the one grabbing the waitress's ass and puking over your boots. He'd get away with a lot of things that Sheb Wooley wouldn't have gotten away with. Sheb began the drunk act during the sessions for the first album (in fact, on Hello Walls No. 2, not included here). “Vienneau used to stop at the liquor store and get a pint for me," remembered Sheb. "I’d get high on sessions sometimes, but Vienneau always said that the drunker I got the soberer I sounded. The pickers loved working those sessions. The Jordanaires loved it. The girls loved it too: they'd do some acting for a change." Ben Colder was successful enough that Sheb could ask for, and often get, a share of the composer credit. The music publishers had nothing to lose: Sheb never asked for a share of the publisher’s fifty percent, only the songwriter's fifty percent. In the easygoing music publishing world of the Sixties, he got more nods than head-shakes. These days, of course, lawyers would still be talking to each other at $200 a hour by the time the record was dead. One of the few to turn down Sheb's request for a license was John Hartford. At the time of the Arab-Israeli war in 1967, Sheb wanted to spoof Hartford’s Gentle On My Mind as Gentile On My Mind, but Hartford and his music publisher decisively nixed the idea. Sheb recorded it in October 1968, but it remains unreleased. Ben Colder didn't shy away from social commentary, though, parodying Big Bad John as gay icon Big Sweet John. "Homer and Jethro did that at a banquet during the dee-jay convention," said Sheb. "I got it from them." The artists generally loved the parodies. Sheb recalls playing an advance copy of Country Music Hall Of Fame for Tex Ritter during an overseas tour. Tex, says Sheb, sat in a little bar in Okinawa with tears rolling down his face.

Sheb signed with MGM a year after its launch, and remained with the label through the remainder of the Forties, all the Fifties and Sixties, and on to the label's demise in 1973. “We did Ben Colder right 'til the end," said Sheb. "In fact, Ben was selling more records than I was, and we kinda swung toward that. The jukeboxes loved Ben Colder singles. They'd have 'Almost Persuaded' and they’d put 'Almost Persuaded #2' beside it. We'd sell a quarter-million of each one, but it would never show up on the charts. They didn’t like parodies. Every now and again, one of them, like 'Almost Persuaded #2' or 'Harper Valley PTA (Later That Same Day)', would sell so well they'd have to include it in the charts, but in general they sold better than they charted."  The success of the Ben Colder records helped land Sheb a regular gig writing material for 'Hee-Haw,' itself far more successful than official ratings suggest.

"It's easier than it used to be to do parodies," said Sheb. "The problem is that the songs aren't around long enough. You hardly learn the original, so the parody doesn't stand a chance."

Sheb is semi-retired now. "I do a few concerts,” he says. “But I’m not going out for the bucks any more." Now past eighty, he still writes songs and he's currently finishing a screenplay. Sheb Wooley hasn't retired, but it's probably safe to say that Ben Colder has drunk his last beer and staggered off into the sunset. - COLIN ESCOTT