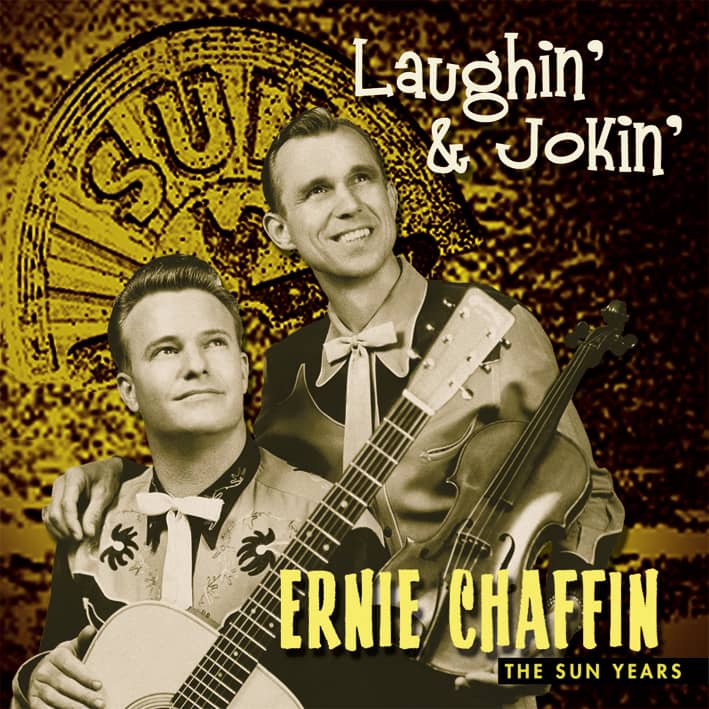 Sam Phillips, the guiding force behind Sun Records, had a knack for spotting talent. Without his legendary experiences with Elvis Presley, Carl Perkins, Johnny Cash, Charlie Rich, Jerry Lee Lewis, Howlin' Wolf and B. B. King, the face of American popular music might have been very different during the latter half of the twentieth century.

It's no surprise that Sam Phillips fell in love with Ernie Chaffin's music the first time he heard it. Sam loved 'different.' He loved hybrid. He broke barriers, pushed boundaries and flouted convention. It was Sam's credo – both personally and professionally.

Just listen to Ernie Chaffin's first two records for Sun – included here along with previously unissued alternate takes. They were, to say the least, 'different.' There is simply nothing in the Sun catalogue before or since (other than recordings by Ernie, himself) that sounds anything like them. These four sides by Chaffin rival anything released by the label for sheer beauty and starkly under-produced power. And the truth is, there was nothing in pop or country music at the time that sounded anything like them.

Sam Phillips wasn't always able to succeed in the marketplace with the music he loved most. Conspicuous commercial failures such as the Miller Sisters haunted him well past his tenure at Sun Records. Ernie Chaffin was another such case. Although Phillips thought the world of much of the music Chaffin created in the cramped studio quarters on Union Avenue, he wasn't able to market it successfully. Other than some tantalizing initial response and occasional regional sales, there was nothing much in the way of financial reward. Two years produced four singles, another seven unreleased studio experiments, and no real chart success.

To the casual fan or collector, it may seem that Sun was only about rockabilly. Nothing could be further from the truth, although understandably Elvis and the first generation rockabillies like Carl Perkins, Billy Riley, Sonny Burgess and Warren Smith have dominated public attention. However, the Sun story runs much deeper. Sun was first a blues label. There were occasional dalliances into hillbilly and gospel, but it was the black honkers, shouters and moaners who dominated Sam Phillips' studio time and release schedule. The appearance of Elvis Presley in 1954 threw everything into a cocked hat. Sam and Sun changed direction, as any reasonable business would have done. Sun was not a registered charity, after all. Within three years, raw rockabilly was no longer the commercial force it had been. Sadly, what Sun did best was no longer a valued commodity in the music business. Those rough edges needed smoothing. Bring in the sweet vocal choruses. Add a sax to those little guitar-led combos. The erosion of what many collectors believe to be the vintage Sun sound was nearly complete by 1960. Even a year before that, the change in popular music was evident in Sun's release schedule, although occasional sides by the likes of Onie Wheeler, Ray Smith or the indomitable Jerry Lee Lewis offered a ray of hope.

Ernie Chaffin came to Sun in the Fall of 1956 when the rockabilly bloom was still on the rose. Sun was not recording or releasing much of anything but rockabilly. Even artists like Warren Smith – whose country leanings were undeniable – were recording material like Ubangi Stomp. It was in this climate that Ernie Chaffin first set foot in the Sun studio. He was a good looking white boy from Mississippi who played the guitar, but the similarities to Elvis disappeared pretty quickly after that. One can only imagine how impressed Phillips was with Chaffin to spend Sun's time and resources on such a contra-trend country boy.

Chaffin came to Sun after his close friend and manager, Pewee Maddux, contacted Sam Phillips. It is really impossible to consider Ernie Chaffin's career in music without acknowledging the impact of Maddux. Certainly, Chaffin's talent was there, as was his enjoyment of performing. But he might very well have remained a strictly local figure on the Gulf Coast of Mississippi without Maddux's involvement. Pewee's letters to Ernie during the early 1950s, dutifully saved in a scrapbook by Ernie's wife, reveal the depth of Maddux's investment in making Ernie a star. He was often on the road recording or photographing the Jessup Brothers Revival Show, a nearly full-time job. He stayed in touch with Ernie continuously and continued to offer encouragement. In March, 1954 Maddux wrote from St. Louis, saying: "I have some great hopes worked up about you and me. Especially you. I believe that with the right breaks, coaching, managing, etc. you can become …one of the top vocalists in the nation. Just keep plugging along. Stay a regular guy (you couldn't change anyway) and don't be afraid of either disappointment or success. I'm behind you with all the experience, hopes and everything I've got to put you in a position to write your own ticket." The next year, Pewee wrote from Evansville, Indiana saying, "We sure ain't gonna give up cause I believe we really do have something that could turn into big time. It is just gonna take lots of work, grit and disappointments, but sooner or later we will come up with something."