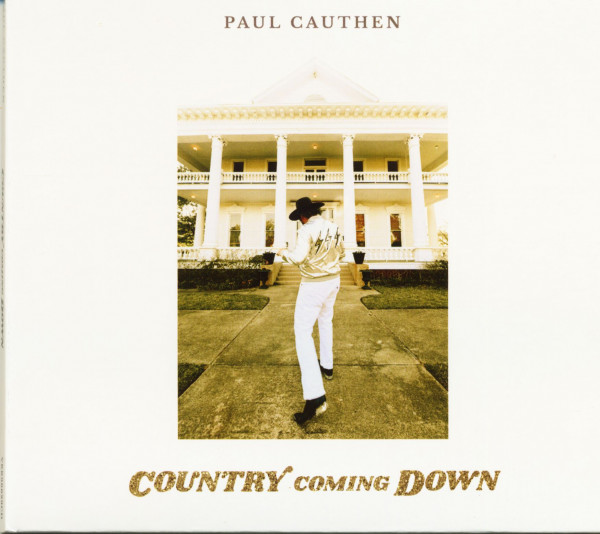 (Thirty Tigers) 10 tracks, digisleeve
Paul Cauthen's country confession
After making a name for himself as one half of the Americana/indie folk-rock duo Sons Of Fathers, Paul Cauthen launched his solo career in 2016 with the album My Gospel, on which he revealed a new side and the full depth of his songwriting talent. Six years, an EP and another album later, Paul is releasing his new third solo album Country Coming Down on his own label Velvet Rose Records in collaboration with Thirty Tigers.

He announced the record back in November 2021 with the single Country As F***, which lives up to its title. The new song and accompanying music video, which features the beer-drinking musician in a cowboy hat having a barbecue in front of a trailer, are a tongue-in-cheek acknowledgement of his country background. The musician revealed to Rolling Stone Country that while he is "first and foremost an artist and songwriter, he is also an entertainer and country boy at heart." The singer, nicknamed Big Velvet because of his distinctive baritone voice, impressively proved that with the song, which is adorned with attitude and attention to detail.

Country Coming Down was produced by Paul, Jason Burt and Beau Bedford.

Learn more about Paul Cauthen
“I’m a singer not a preacher, but these songs are my sermon,” says Paul... more
Close menu
"Paul Cauthen"

“I’m a singer not a preacher, but these songs are my sermon,” says Paul Cauthen. “We’re ripping each other apart out there, and forgiveness and mercy are what’s going to get us through. I want to use my voice the best I can to spread that message while I’m here on this Earth.”

Somewhere between an EP and an album, Cauthen’s new seven-track collection, ‘Have Mercy,’ is a stunning showcase of the pure power of truth and love. Building off the success of ‘My Gospel,’ the Texas troubadour’s breakout debut, ‘Have Mercy’ pushes Cauthen’s songwriting to new heights as he searches for common ground and peace of mind in an increasingly polarized world. Fueled by nearly two straight years of personal and artistic growth on the road, the songs reflect a newfound maturity and creative self-assurance. Cauthen’s rich, velvety baritone is still very much the centerpiece here, but it’s the craftsmanship that dazzles more than anything. ‘Have Mercy’ is the work of an artist who’s turned his life over to the music, body and soul, and the rewards for his devotion are undeniably on display throughout the record.

“I wanted to make an honest leap from ‘My Gospel’ to ‘Have Mercy,’” Cauthen explains. “I wanted to elevate everything: the songwriting, the sound, the live show, the look and the feel of it all. I’ve given up everything for the music and I’ve grown stronger because of it.”

While he’d already earned a reputation as a fierce and fiery frontman from his days in the critically acclaimed band Sons of Fathers, it wasn’t until the 2016 release of ‘My Gospel’ that Cauthen truly tapped into the full depth of his prodigious talents. Rolling Stone called the album “a triple-barreled blast of Texas country, soul and holy-roller rockabilly delivered by a big-voiced crooner,” while Vice Noisey dubbed it “a somber reminder of how lucky we are to be alive,” and Texas Monthly raved that Cauthen “sound[s] like the Highwaymen all rolled into one: he’s got Willie’s phrasing, Johnny’s haggard quiver, Kristofferson’s knack for storytelling, and Waylon’s baritone.” The album landed on a slew of Best Of lists at the year’s end and earned Cauthen dates with Elle King, Margo Price, Billy Joe Shaver, and Cody Jinks along with festival appearances from Austin City Limits and Pickathon to Stagecoach and Tumbleweed.

It was during those relentless months of touring that Cauthen first began to explore the songs that make up ‘Have Mercy.’

“A lot of these songs are tunes we’ve been playing live and fans have been asking about for a while,” says Cauthen. “They’re showstoppers when we play them out on the road, and I believe the whole purpose of putting out a record is so that people can have a little bit of that concert experience back at home.”

To that end, Cauthen and producer Beau Bedford recorded the album as live as possible at Modern Electric in Dallas, capturing all the raucous passion of the stage without sacrificing any of the nuance and sophistication the songwriting demanded. Fortified by contributions from The Texas Gentlemen, a 21st century Wrecking Crew of all-star musicians that’s backed everyone from Leon Bridges to Kris Kristofferson, the album is a plea for kindness and grace, both internally and externally. As easy as it is to hear these songs as an appeal for compassion from his fellow man, there are moments when it’s clear that Cauthen is singing as much to himself as anyone else, a reminder that love and forgiveness aren’t just for our brothers and sisters, but also for the faces staring back at us in the mirror.

“I’ve done a lot of reflection lately,” Cauthen says. “I’ve brought meditation into my life, and I’ve slowed my roll a bit. I’ve started to pull back on the reigns when it comes to living hard out there on the road. I love my band and I’m thankful to be where I’m at as a writer, and I think these songs really reflect that.”

The collection opens with the ominous chain gang percussion of “Everybody Walking This Land,” a righteous tune that thunders with the authority of God handing down the Ten Commandments. In a booming, half-spoken/half-sung drawl, Cauthen rattles off a list of all the things that divide us, insisting that they mean nothing compared to the humanity that we share. “Lord we pray we make it through the day,” he sings, “all you mothers, you brothers, you sisters, you fathers, believers, pretenders, bonafide sinners, everybody walking this land.”

“That song just means everything to me,” Cauthen explains. “Beau and I wrote it like two maniacs drinking coffee and pulling out our hair around a Steinway piano, laughing about doing the Lord’s work.”

Despite the album’s sometimes-heavy themes, that underlying sense of levity and brotherhood is the lifeblood of the collection. Cauthen never loses sight of the sheer joy he derives from playing music, and through all the ups and downs, he recognizes that good times are hollow if you can’t share them with the ones you love. On the funky “Resignation,” he learns to appreciate the present by letting go of his struggles and joining his pals for a drink at the bar, while the playful Jerry Reed-meets-Elvis Presley shuffle of “My Cadillac” finds bliss in the simplicity of joyriding with friends, and the epic, horn-and-string laden “In Love With A Fool” pays tribute to the partners who keep the home fires burning while their lovers are out chasing dreams on the road.

Cauthen writes with a unique blend of Biblical and modern vernacular, a style he likely picked up from his preacher grandfather. “Have Mercy” lands like a secular hymn for a country still coming to terms with the deep wounds of its bloody past and divided present, while ‘Lil Son’ lifts straight from generations of family teachings.

“That song is a message from my granddad,” Cauthen explains. “The lyrics come from riding around with him in his jeep when I was a kid, just listening to his instructions and learning from his morality.”

As Cauthen says, he’s ultimately a singer not a preacher, and the songs on ‘Have Mercy’ cut across cultures and creeds, speaking to truths that are bigger than any particular faith. The music is timeless, the themes universal. Whether you believe in the next life or not, our days are numbered, and Paul Cauthen’s here to remind us that a little love goes a long way.

“When I’m gone,” he concludes, “I hope that someday somebody picks up one of my records and says, ‘This guy was a hard worker. He honored the songs, he honored the music, and most of all, he honored his listeners.’ That’s the legacy I want to leave behind.” 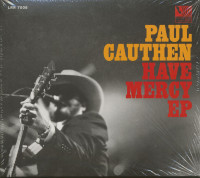