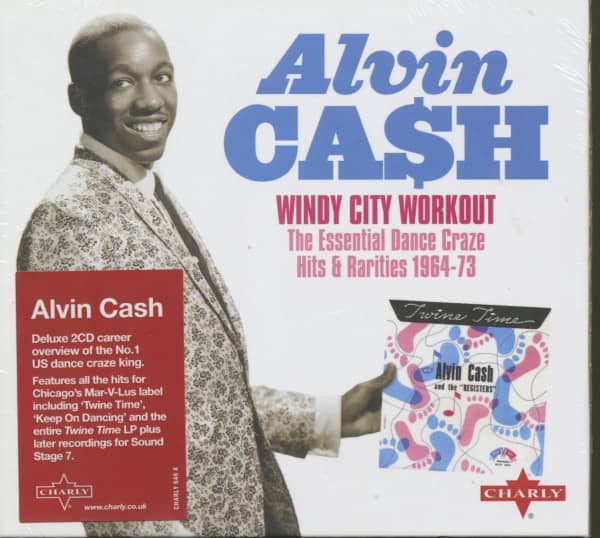 Maverick to the core, Andre Williams was hunkered down producing at George Leaner's One-derful! Records in Chicago after one too many run-ins with Berry Gordy at Motown. He'd had some success at One-derful! in 1963 with The Five Du-Tones' Shake A Tail Feather (see 'Sweet Soul Music 1963') and was working on a grinding minor-key groove tailor-made for a new local dance, the Twine. Until he went into the studio with Andre, Alvin Cash was best known for his fancy footwork. Born Alvin Welch on February 15, 1939 in St. Louis, he formed a dance troupe there with his three little brothers called The Crawlers. Cash brought them to the Windy City in 1963. "I came with a group called The Four Tabs. While we was working with The Four Tabs, we did a show in Gary with The Five Du-Tones," said the late Cash. "I got with their company, which was Mar-V-Lus, and that's when I did 'Twine Time.'"

"Alvin Cash got 'Twine Time' by accident," says Andre. "I had already cut 'Shake A Tail Feather.' So the Five Du-Tones were in New York. I'm getting the Five Du-Tones' second record ready, right? So I'm in there cuttin' the track, 'cause 'Twine Time' was supposed to have been the Five Du-Tones' song. But by the Five Du-Tones not being there, I was cuttin' the track, and I needed somebody to put the words on, so I don't forget the words. So Alvin's standing out there in the lobby. I said, 'Alvin, come in the studio a minute. I want you to put these words on this song.' He put the words on the song, and the next morning George heard it. George said, 'You know, that's good enough to release if we put it out!' That's what you call being in the right place at the right time, 'cause Alvin would have never been signed."

Other than Alvin's pronouncement "It's Twine Time!," followed by a couple of "oohs" and "aahs" on the intro and a few later exhortations,Twine Time was an instrumental. Out on the Mar-V-Lus subsidiary as by Alvin Cash & The Crawlers, it vaulted to #4 R&B and #14 pop, with Leaner's wife listed as co-writer. "They were doing the dance, and just lucky we come right out on time with the record," said Cash. "They had some other (Twine songs), but I think ours was the strongest." Alvin had more funky dance hits on Mar-V-Lus: The Barracuda in '65 andThe Philly Freeze and Alvin's Boo-Ga-Loo the next year (The Crawlers name was replaced on the latter pair by his band's moniker,The Registers). Each one had accompanying steps that he demonstrated for TV viewers on 'American Bandstand' and 'Shivaree.' "Most of my records have become dances," said Alvin, "because we are professional dancers." After a '68 hit for George's brother Ernie Leaner's Toddlin' Town imprint, the aptly titled Keep On Dancing, Cash faded from the R&B hit parade, but he kept plugging away on the Chicago scene right up until his November 21, 1999 death.