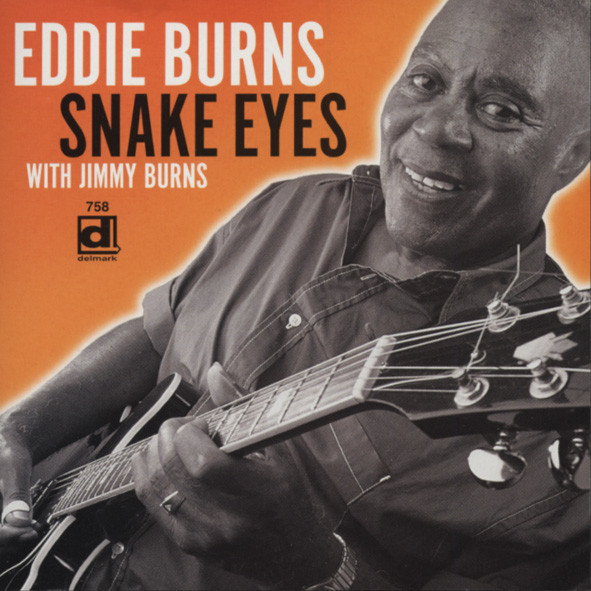 Eddie Burns and John Lee Hooker became fast friends when they met in 1948, and remained so until Hooker passed away recently. Burns backed Hooker at Chess Records in 1965 playing on Hook's classic The Real Folk Blues . Eddie Burns' plaintive voice, wailing harmonica, and sure-handed guitar hearken back to the heyday of Detroit blues a half-century ago. Burns, who like his peers grew up in Mississippi, is now the last of Detroit's postwar legends to still live and play in the Motor City. Eddie's brother, Jimmy Burns, has one of Delmark's top sellers with Leaving Here Walking (Delmark 694). Snake Eyes contains 15 songs including twelve Eddie Burns origina

EDDIE BURNS' PLAINTIVE VOICE WAILING harmonica, and sure-handed guitar hearken back to the heyday of Detroit blues a half-century ago. Back then, Burns was a Hastings Street regular. cutting storefront singles and making the rounds of the black-owned clubs and taverns where John Lee Hooker. Baby Boy Warren, Willie D. Warren. Calvin Frazier. and Bobo Jenkins were also making their names playing lean electric blues and boogies. Burns, who like his peers grew up in Mississippi. is now the last of Detroit's postwar legends to still hve and play in the Motor City, and his pure. unadorned blues show that the 74-year-old bluesman is. indeed, a lion in winter. Born in Belzoni. Mississippi. in 1928 and raised around Clarksdale, Webb, and Dublin, Eddie Burns is the eldest brother of Chicago bluesman Jimmy Burns. who accompanies him on this record.

"I guess music was in our blood." Eddie says. "because our father, Albert, was a musician. My dad was a deacon in the Baptist church, and he played piano. guitar— like the Charley Patton-type thing. He played all that stuff. He also blew harmonica and sung. He would play for a few of the country dances at his house." Like many Mississippi Delta bluesmen of the 1930s and '40s. Eddie's first instrument was a homemade one-string fashioned out of a piece of broom wire tacked to a wall and bridged with bottles. "I played it with a little medicine bottle in my [fretting] hand, and then I'd pick it I was singing Tommy McClennan. just about everything that was out —boogie woogies and stuff. I was good with that wire.- His interest in harmonica began at age seven. when he saw Sonny Boy Williamson II, a.k.a. Aleck Rice Miller. walking by his plantation shack with a belt of harmonicas around his waist. A farmhand offered the bluesman a dime to play Peetie Wheatstraw's "Good Whiskey.- and Sonny Boy tore it up.

The event left an indelible impression, as did Sonny Boy's later performance at his grade school. But Burns didn't take up harmonica until hearing the recordings of John Lee Williamson, who was also known as Sonny Boy Williamson I. "My first influence was John Lee Williamson. and I started blowing that kind of music." Burns remembers. "We had a Philco radio that played 78s—ten of them— back around 1938, '39, and all of the people that was out there back then was playin. blues. I liked John Lee Williamson, which was Sonny Boy I, Jazz Gillum, Big Bill Broonzy. Memphis Slim, Lil Green. Walter Davis. Tommy McClennan was my favorite. because I idolized him. Still do-1 still like him. He was so soulful, if you listen to his old stuff. That was my first real influence, other than John Lee Williamson. Them two was like running along together with me.- Unlike most players, Burns. who's left-handed. learned to play with his harmonica flipped over. a trait shared by Little Walter. "On a harmonica, the bass is usually on one side." he explains, "but I have to turn it over, so I'm blowing bass on the opposite side, so that makes a difference.

I am also left handed, but I'm blowing from the right to the left. And Little Walter did that too. That's how I could pick up on his music so well. See. I play guitar right-handed, like everybody else do. and when I throw. it's right-handed, but I write left-handed. Messed up. eh?" Troubled by hard times and racist attitudes, Burns left Mississippi in 1947 to become a troubleshooter for the Illinois Central. While working in Iowa. he formed a duo with guitarist John T. Smith. playing blues on street corners. He accompanied Smith and a girlfriend to Detroit the following year and began playing house parties, where he soon met John Lee Hooker, who stopped in when he overheard them playing. "He liked the way we sound," Eddie recalls. "I was blowin' harmonica—that's all I did then. So John listened to us that night. and then he sat in with us. That's when he told us that he had already cut this tune that wasn't out yet, 'Boogie Chillen.' but he had another session comin' up. This was a Saturday night, and he had another session Tuesday, and he invited us to play. We kept that appointment and went to the studio with him." Burns backed Hooker on his Sensation singles "Burnin' Hell" and "Miss Eloise." blowing a whiskey-soaked American Ace harmonica with a sprung key.

At the same session, Burns launched his own recording career. cutting the Sonny Boy Williamson I-inspired "Notoriety Woman" and "Papa's Boogie" with John T. Smith. Hooker and Burns became fast friends. and remained so for the rest of their lives. "Of all the musicians I've known,- Hooker told me in our 1997 Guitar Player interview. "Eddie Burns is the one I was closest to. Oh. Eddie and I became good buddies right away. We was so close. and he listened to me to get a lot of his stuff. When I first met him. he was only playin' harmonica, and 000h, he was so good!" Inspired by Hooker. Burns was soon teaching himself guitar. "I just picked the guitar up and started pickin' it," Burns says. "I really learned to play guitar at these house parties for a dollar and a half a night, from sunup till sundown. I had a lot of good influences here in Detroit. I learned from the jazz guitarists. John Lee Hooker. Arthur Crudup and Tommy McClennan—those was my main two, and then T-Bone Walker when I started changin.. Johnny Moore and the Three Blazes. See. I play all of those different styles. And I always was a leader—a lead guitarist." While John Lee Hooker went on to become an early-'50s blues star, releasing stacks of records on many labels.

Burns mostly worked day jobs. raised his kids, and played local clubs. His 1952 Deluxe single. "Hello Miss Jessie Lee"/"Dealing With the Devil," brought him a regular gig at the Tavern Lounge. which he celebrated in the title of 1953's "Tavern Lounge Boogie." released by Modern. In 1954, his cut the Hastings Street classics "Superstition- and "Biscuit Baking Mama," which came out on Checker credited to Big Ed & His Combo. Though Burns was learning songs from jukeboxes and had expanded his band to piano. two guitars. and drums, most of his records during the 1950s sounded down-home and countrified. During the early 1960s Burns updated his sound and jumped to Harvey Fuqua's Harvey label, scoring regional hits with "Orange Driver" and "Hard Hearted Woman." which featured a then-unknown Marvin Gaye on drums. "But then Harvey Fuqua and them tried to change me into a Junior Walker.- Burns laments, "and that wasn't me." Burns went to work as a sideman, reuniting with John Lee Hooker at Chess Records' Chicago studio in 1965 to play lead guitar on several of the tracks or Hook's classic The Real Folk Blues album. On his own, Burr_ also recorded "Jinglin' Baby," which he happily not, has brought him royalties ever since its inclusion on ti-.T Chess Blues box set.

By the late 1960s, most of the establishments along Har-- ings Street had closed or been demolished to make way for freeway. Nearly all of the small, independent blues labels had folded or been sold, and Motown, R&B, and rock and roll had supplanted blues. boogie, and jump as Detroit's premier sound. Outside of a few supper clubs and bars in Detroit and Ann Arbor, precious few venues were available to pure blues musicians. With six children and a wife to support, Burns learned welding at Detroit's Wolverine trade school. "I didn't know no skilled labor job," he says, "and I did that because my hands was important. You gotta be careful with your hands if you play guitar." He woodshed on acoustic guitar, mastering the country blues style of his boyhood hero Tommy McClennan. His return-to-roots paid off in 1972, when he toured England and recorded his first albums, the all-original Detroit Black Bottom for Big Bear Blues and Bottle Up & Go, with its Tommy McClennan covers, for Action Records. Burns returned to Europe as part of the "American Blues Legends 1975" tour, winning critical praise for opening his shows alone on harmonica and guitar, and then burning hard with a band that included Jimmie Lee Robinson on bass. Back home, he played the festival circuit and recorded Detroit Reunion with Eddie Kirkland. In 1980, he had a brief, unsuccessful flirtation with running his own label.

A couple of years later, the European-based Moonshine label issued Treat Me Like I Treat You, a compilation of Burns' early singles and a pair of 1982 performances. In 1989, Burns recorded his first CD, Detroit, for the Ohio-based Blue Suit label. Recorded on September 12 and 13, 2001, Snake Eyes is an important addition to Burns' blues legacy. His rollicking "Papa Likes to Boogie" is classic house-party music, Detroit style, while "Hello Miss Jessie Lee" is a plaintive, unadorned harmonica blues reminiscent of Sonny Boy Williamson I. "Lend Me Your Love" shows his finesse on acoustic guitar. On other tracks, Burns reveals his mastery of slow blues, easy swing, and the mantra-like riff. Making it a family affair, brother Jimmy Burns guests on electric and acoustic guitars and takes the second vocal on "Your Cash Ain't Nothin' But Trash." Best of all, throughout the project Burns remains true to his musical vision of blues: "It's an art, just like anything else it ain't about no down this and that. And it ain't about no modern times.

It's about blues. Some people call blues music 'magic' because it makes this contact. And when you make this contact with it, you is gonna feel your hair crawlin' on your arms and things. That's what it's all about." Today, Burns lives on Detroit's East Side with his wife of thirty years. He continues to write songs and play festi-vals, and enjoys gigging around the town where he made his name. What keeps him vital? "Music is in my blood, and that's all I want to do, because I love makin' people happy. Because when everybody has a good concert and I'm playin' my music, I'm high, man! Do you know why? It's my music that the people is enjoyin', stuff that I done sit down and created. And that's a good feeling." And that good feeling is exactly what Eddie Burns' blues are all about.

— JAS OBRECHT
JAS OBRECHT is the author of Blues Guitar: The Men Who Made the Music and Rollin' & Tumblin': The Postwar Blues Guitarists