Press - Various - At The Louisiana Hayride Tonight (20-CD) - No Depression 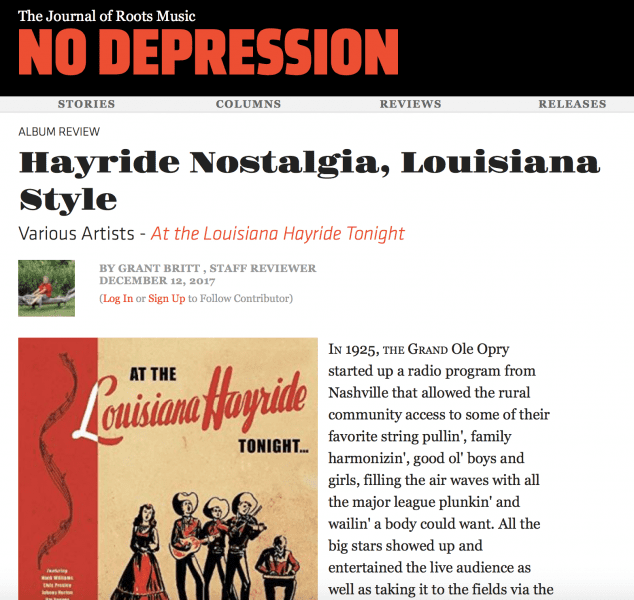 In 1925, the Grand Ole Opry started up a radio program from Nashville that allowed the rural community access to some of their favorite string pullin', family harmonizin', good ol' boys and girls, filling the air waves with all the major league plunkin' and wailin' a body could want. All the big stars showed up and entertained the live audience as well as taking it to the fields via the airwaves.

The Opry had a 23-year head start when the Louisiana Hayride debuted in '48 in Shreveport, Louisiana. It cost 60 cents for a seat at the three hour live show, broadcast from the 3,800-seat Municipal Auditorium. The Opry had bigger stars initially, but the Hayride was more adept at discovering and showcasing soon-to-be-big talents. A partial list of Hayride performers who got their first shot at a mass radio audience includes Hank Williams, George Jones, Kitty Wells, Faron Young, Webb Pierce, and Johnny Cash.

The two broadcasts shared stars but not format. The Opry's rigid format did not appeal to alleged Hayride founder Horace Logan (Logan, the KWKH program director, takes credit for the Hayride, but a trio of men, including station manager Henry Clay and commercial manager Dean Upson, are key players who got little recognition for their efforts). The Hayride format was set up different than the Opry's, where a performer came on for half an hour, essentially hosting his own show with guest stars. The Hayride made everybody work for attention in short spurts; usually they did only two numbers each. If the performer merited an encore, he got two more songs, and that was it. Logan said it was a terribly difficult show to work.

The Bear Family has assembled a 20-CD set of the live shows from '48-'65, and it is one hell of a Hayride. It's a huge pile of material to digest, but the 224-page hardcover book that comes with the set is a meticulous, yet easy-to-follow guide through the massive collection. The CDs are grouped by dates, but there's also a list of performers listed alphabetically in the book for fast access to the 167 artists featured on the collection.

Elvis was just 19 when he was captured here in '54 performing his first Sun Records release, “Blue Moon Of Kentucky”/ “That's All Right Mama.”

“Are you all geared up there to let us hear your song?” golden-throated announcer Frank Page asks Presley, who starts his pre-song windup at warp speed, sounding like's he plugged into a 220 socket. “You got anything else to say?" Elvis asks, sounding ready to leap off the stage and into the crowd. But his performance is remarkably restrained, Scotty Moore chiming pretty jazz licks while Elvis croons, a rockabilly hiccup or two escaping now and then, but keeping his shakin' on the down low til the very end, firing off a stuttering string of "de -de- de- de -de's" before gliding to a smooth halt.

On the basis of that performance, Elvis got signed as regular performer. Presley's '55 performance of “Shake Rattle and Roll” is a bit more hectic, a pedal steel laying curlicues around the King as he throws down some high energy rock and roll on the song Big Joe Turner had cut loose on the previous year.

This performance of Hank Williams' “Long Gone Daddy” is previously unreleased, cut in '48, two years after the Grand Ole Opry had rejected him. Hank sounds great on this one, honky-tonkin alongside Georgia Peach Pickers' Jimmy Summey on pedal steel.

Between the headliners are regional favorites like West Virginia's Bailes Brothers, who had gotten exposure on the Opry before coming along on the Hayride in '48, rendering tight family harmony on the country gospel number “He Will Set Your Fields on Fire.”

Wilma Lee And Stoney Cooper may be best known for their '61 version of a gory auto accident where whiskey and blood ran together on “Wreck on the Highway," but their raucous country honk/bluegrass rendition of “Big Midnight Special” here is one of the best interpretations of the traditional tune covered by artists from Leadbelly to Little Richard to Creedence Clearwater Revival.

“Grandpa Jones comes from a little ole show they have up there in Nashville, Tennessee, the name slips my mind, but it's the Nashville branch of the Louisiana Hayride,” announcer Norm Bale says, introducing Jones' debut at the age of 57 on this March 1960 show.

Jones' cornpone humor never got old – his dry wit belied his bumpkin persona. He introduces his song as “Son, Get Up And Turn On The Light, I Think I Knocked One Of Your Maw's Eyeballs Out” before launching into a rip-roaring take on “Mountain Dew” that has him flailing away like a madman.

Jones would have have the honor of closing the final Hayride in August of 1960, performing Jimmie Rodgers' "Waiting For A Train.”

Although the the Hayride was officially over in 1960, it didn't stop, staggering back to life sporadically till 1965. The last CD covers '60-'65. Johnny Cash performs “Five Feet High and Rising” in 1962 before hawking longtime Hayride sponsor Southern Maid Donuts. “Best in the world,” Cash ad libs as the announcer tells him “We don't have anything here to read, we just talk about 'em.” Cash jumps right in with: “Getcha a cup of coffee and jes' dunk em and slurp 'em, man, they're fine.”

Loretta Lynn's high-pitched, high-octane cover of Hank Williams' “Mind Your Own Business” closes the set with the same song Williams himself opened the collection with on his '48 Hayride appearance.

It looks as great as it sounds, with rare pictures and posters of the performers with detailed notes on the performances. The cuts are well recorded but with a warts-and-all mentality that's refreshing, vintage live radio at its best. A valuable piece of memorabilia, this massive box set is a perfect year-end gift that'll be treasured and passed down for generations.