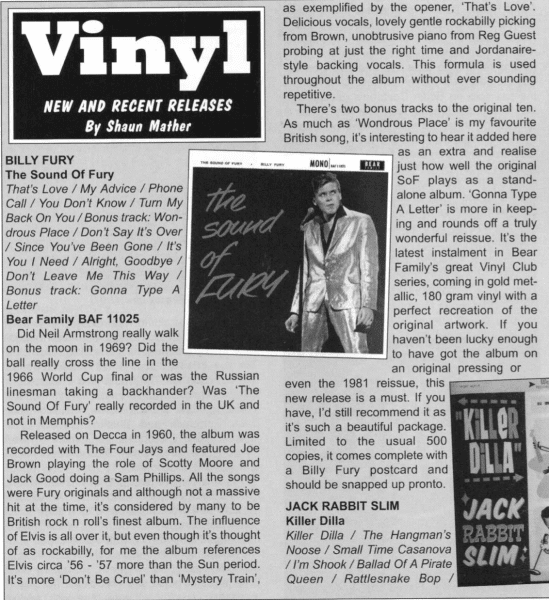 Did Neil Armstrong really walk on the moon in 1969? Did the ball really cross the line in the 1966 World Cup final or was the Russian linesman taking a backhander? Was The Sound Of Fury' really recorded in the UK and not in Memphis? Released on Decca in 1960, the album was recorded with The Four Jays and featured Joe Brown playing the role of Scotty Moore and Jack Good doing a Sam Phillips. All the songs were Fury originals and although not a massive hit at the time, it's considered by many to be British rock n roll's finest album.

The influence of Elvis is all over it. but even though it's thought of as rockabilly, for me the album references Elvis circa '56 - '57 more than the Sun period. It's more 'Don't Be Cruel' than 'Mystery Train', as exemplified by the opener, 'That's Love'. Delicious vocals, lovely gentle rockabilly picking from Brown, unobtrusive piano from Reg Guest probing at just the right time and Jordanaire-style backing vocals. This formula is used throughout the album without ever sounding repetitive.

There's two bonus tracks to the original ten. As much as 'Wondrous Place' is my favourite British song, it's interesting to hear it added here as an extra and realise MONO ,. just how well the original SoF plays as a stand-alone album. 'Gonna Type A Letter' is more in keep-ing and rounds off a truly wonderful reissue. It's the latest instalment in Bear Family's great Vinyl Club series, coming in gold met-allic, 180 gram vinyl with a perfect recreation of the original artwork.

If you haven't been lucky enough to have got the album on an original pressing or the 1981 reissue, this new release is a must. If you have, I'd still recommend it as it's such a beautiful package. Limited to the usual 500 copies, it comes complete with a Billy Fury postcard and should be snapped up pronto.