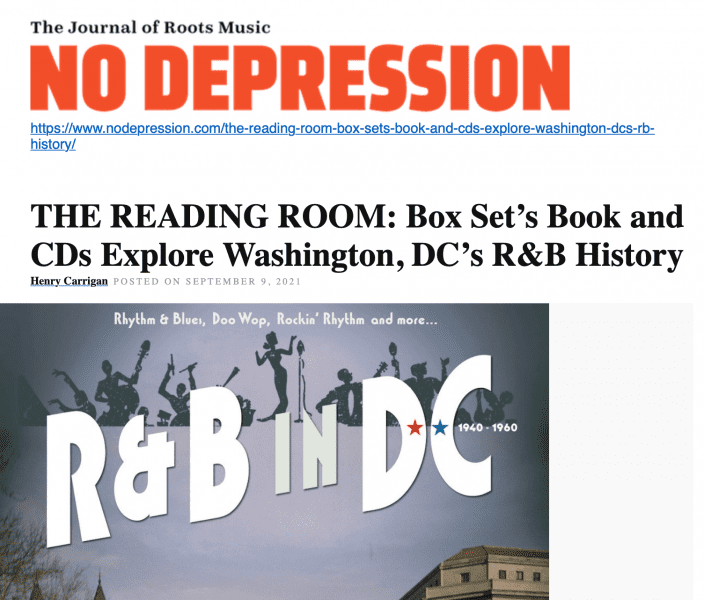 THE READING ROOM: Box Set’s Book and CDs Explore Washington, DC’s R&B HistoryWhen we think about R&B and soul, Muscle Shoals, Memphis, Detroit, and Philadelphia come immediately to mind as the homes of the sweet grooves that filled dance floors and clubs. The records of William Bell, Carla Thomas, Percy Sledge, Aretha Franklin, Marvin Gaye, Gladys Knight, Billy Paul, and The Spinners, among many others, stayed at the top of the charts in the ’60s and ’70s, each single or album defining an evolving sound identified with the particular city in which the music was recorded at now-iconic studios.Washington, DC, doesn’t come to mind as readily, though, when we think about soul music and the rise of R&B. While Washington had its stars, such as Don Covay, Marvin Gaye, The Clovers, and Van McCoy, their success came after they had left DC and were associated with other labels in other cities. A monumental new book by music researcher and radio host Jay Bruder — with editorial assistance from John Broven (author of Rhythm and Blues in New Orleans), Dan Kochakian (contributor and editor at Blues and Rhythm magazine), Colin Escott (author of Hank Williams: The Biography), and longtime Washington-area DJ and radio program director Dick Lillard — corrects this oversight.

The lavishly illustrated, exhaustively detailed book, part of the new mammoth 16-CD box set R&B in DC: 1940-1960 (Bear Family), offers a captivating tour of the evolving R&B scene in DC from the 1940s to the late 1950s. The project began when Richard Weize, then president of Bear Family Records, approached Bruder about putting together a 6-CD set about R&B in the Washington area, and the project ballooned to fit the fuller story.The book’s opening paragraph offers a colorful snapshot of the vision for the book and the set. “The winter of 1951-1952 in Washington, D.C., was typically gray and chilly. Most afternoons you could find Andy Magruder and his buddies from Francis Junior High School walking home to traditionally African-American neighborhoods in what they would call Georgetown. Today we would call it West End and Foggy Bottom. They were a vocal quartet. The group was named, in the fashion of the time, after a bird. The Blue Jays. And if the boys were together, they were singing, practicing their songs, songs they had heard on the radio or songs they had created themselves.” Bruder describes the ways the boys would scrape together money by collecting bottles for deposit and doing other odd jobs. Their goal, he writes, was to get together “the dollar and quarter they needed to make a recording at the Circle Recording Studio … just six blocks from the White House. When the lads came in and paid the fee, the proprietor would set up the studio, put a blank lacquer disc on the record lathe and let the boys cut an instantaneous record to take home.”Bruder opens with this story of the Blue Jays as a way of setting the stage for the book: Their story, he writes, “documents the determination of talented young Washingtonians to gain a foothold in the music business. It recognizes the insight of local record men and women who saw the potential of the young people who walked through their doors looking for a way to get ahead in life through music.”

In a series of vignettes, Bruder explores topics such as “Recording and Record Making in Washington” and “The African-American Press,” as well as offering sketches of the clubs, restaurants, and theaters in which groups and singers gained fame for their singing. He chronicles the stories of people such as Lillian Claiborne, whose DC Records, started in 1947, sustained a community of musicians and launched the careers of vocal groups like The Heartbreakers and Frank Motley.He also tells the story of Quality Records, where Ahmet Ertegun got his start. In 1946 Ertegun teamed with Herb Abramson, who had already started a company called Jubilee Records and recorded Sister Ernestine Washington, and Max Silverman of Quality Music, a DC record store, to form the Quality label. They pressed a single 78 of the Ernie Fields Orchestra featuring vocalist Mel Moore — from whom Abramson thought he could get a Billy Eckstine sound — with the songs “Thursday Evening Blues” and “Don’t Blame Me.” The launch of the record never happened, Quality Records disappeared from view, and Ertegun went on to an illustrious career heading up Atlantic Records.
The HeartbreakersThe biographies of the artists are the centerpiece of the book. Each biographical sketch provides rich detail about the artist or group, connecting them to the DC area and their successes at the regional level and beyond. The Crawford Brothers, for example, are “best known for their recordings on Aladdin Records of Los Angeles and are therefore identified as a West Coast band. Washingtonians remember The Crawford Brothers, for instance, was one of D.C.’s most dynamic rock ‘n’ roll bands of the late 1950s … this is a band that cuts across musical generations. Jimmy was just old enough to have been immersed in the R&B sounds of the early 1950s while Paul, and to a greater extent Clyde, came of age at the dawn of rock ‘n’ roll. This age span gives the band a unique sound.”Marie Knight was the “gospel singing sidekick of Sister Rosetta Tharpe, and the two, along with Tharpe’s mother, Sister Katie Bell Nubbin, frequently appeared at large gospel concerts at Washington’s Griffith Stadium.” The Heartbreakers seemed poised to follow The Clovers to national fame; Lillian Claiborne had landed them a contract with RCA Victor, but the four singles they released between November 1951 and August 1952 did not sell in large quantities.The book also features track notes for each of the 16 CDs in the box set, providing details about each of the 472 tracks. It also features hundreds of arcane facts and unexpected connections drawn from contemporary sources and artist interviews that provide a new insight into Washington’s role in the development of R&B. The tracks themselves illustrate the roots of DC R&B and its debt to jazz, pop, and gospel and show how a distinctive style of R&B developed out of swing, big band, and other musical sources.R&B in DC contains riches untold and repays richly every re-reading. The book alone, at 352 pages, is worth the price of the box set, but the 16 CDs deepen the introduction to an R&B scene every bit as dynamic as Detroit or Memphis and just as influential. Every page and every disc bring new discoveries, broadening our perspectives on the history of R&B.