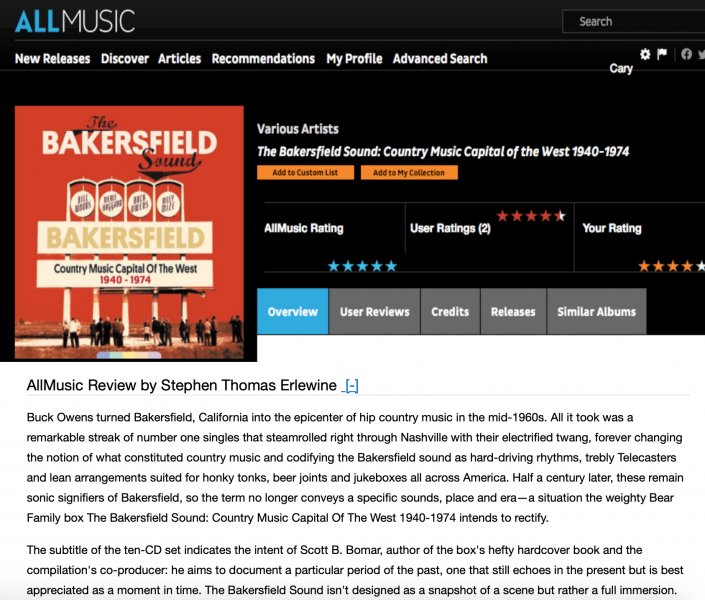 Buck Owens turned Bakersfield, California into the epicenter of hip country music in the mid-1960s. All it took was a remarkable streak of number one singles that steamrolled right through Nashville with their electrified twang, forever changing the notion of what constituted country music and codifying the Bakersfield sound as hard-driving rhythms, trebly Telecasters and lean arrangements suited for honky tonks, beer joints and jukeboxes all across America. Half a century later, these remain sonic signifiers of Bakersfield, so the term no longer conveys a specific sounds, place and era—a situation the weighty Bear Family box The Bakersfield Sound: Country Music Capital Of The West 1940-1974 intends to rectify.

The subtitle of the ten-CD set indicates the intent of Scott B. Bomar, author of the box's hefty hardcover book and the compilation's co-producer: he aims to document a particular period of the past, one that still echoes in the present but is best appreciated as a moment in time. The Bakersfield Sound isn't designed as a snapshot of a scene but rather a full immersion. Many of the biggest singles from Owens and Merle Haggard, the two titans of Bakersfield Country, are side-stepped in favor of deep cuts, demos and live cuts, selections that help give familiar tunes a fresh kick; when surrounded by music from fellow travelers, including many names who are fairly obscure, they regain their original vitality. Context is the reason why The Bakersfield Sound seems so alive as a listening, the other is pacing. Sequenced chronologically—the great exception is the tenth disc, which rounds up a bunch of rougher broadcast and live tapes, along with other working variations—

The Bakersfield Sound provides an excellent prehistory to the Buck's Big Bang of the 1960s, setting the scene with a clutch of migrant worker field recordings from the early 1940s before settling into a bunch of western swing and country boogie. Within the wild rhythms of the Maddox Brothers & Rose and the jumping blues of Bob Wills & His Texas Playboys lie the seeds of not only Owens and Haggard, but all their peers and predecessors, including Tommy Collins and Wynn Stewart. As the discs roll on, the aforementioned artists are a constant presence, but so is the king of truck driving country Red Simpson, along with such local draws as Billy Mize and Faye Hardin, each adapting to the subtly shifting sounds of the time. By the middle of disc four, The Bakersfield Sound hits its stride, alternating between these foundational figures and obscure names who nevertheless cut a few 45s that sound as sweet as anything else on the box; Mize's "Gentle On My Mind" lift "Make It Rain" and Johnny Campbell's galloping "Mr. Conscience" are proof of that .

By the second half, it becomes quite clear that the sound of Bakersfield wasn't confined to its city limits, nor was it strictly about the train-track rhythms and hot shot picking of the Buckaroos. It was an expansive, imaginative American music, building upon country traditions by relying on new technology and singing about modern concerns. Within his book, Bomar traces the origins of the place, the artists and the tracks, all of which are welcome, but the highest testament to The Bakersfield Sound is that as a collection of songs, it plays like the jukebox of any country music fan's dreams.