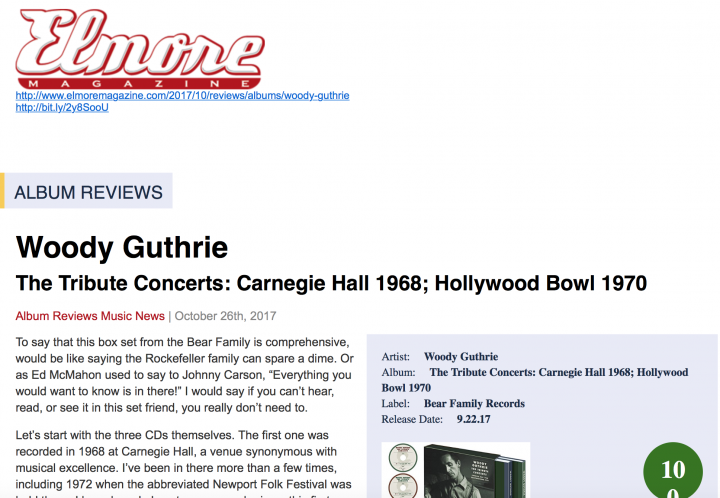 To say that this box set from the Bear Family is comprehensive, would be like saying the Rockefeller family can spare a dime. Or as Ed McMahon used to say to Johnny Carson, “Everything you would want to know is in there!” I would say if you can’t hear, read, or see it in this set friend, you really don’t need to.

Let’s start with the three CDs themselves. The first one was recorded in 1968 at Carnegie Hall, a venue synonymous with musical excellence. I’ve been in there more than a few times, including 1972 when the abbreviated Newport Folk Festival was held there. I have heard almost everyone who is on this first tribute show play there, so I can say with great certainty, the attention to audio detail shown to these historic tapes will place you back in the Hall itself , no matter where you are sitting.

The recording occurred a few months after his passing; Woody, who was a folkie but a jazzman too, might have taken slight exception to the scripted yet necessary narrative that runs through the performance, but he certainly would of liked hearing his friends Robert Ryan and Will Geer narrate the goods on Guthrie. No doubt he’d have the time of his life in hearing old amigos like Pete Seeger and Rambling Jack Elliot sing his songs along with his children both biological (Arlo) and the ones who he would influence to roam the troubadour’s trail, perfomers like Judy Collins, Tom Paxton, Odetta (Lord, what a powerhouse!), Richie Havens and Dylan, who re-emerges in public for the first time in two years with all the future members of the Band in tow.

The second and third CDs contain the show held at the Hollywood Bowl and more. I understand that when these recordings were first released by Columbia and Warner Brothers, they mixed both concerts, which would have given them a totally different and confusing acoustical atmosphere. At the Hollywood Bowl show, most of the Carnegie performers are joined with Joan Baez, Ry Cooder, Country Joe McDonald, old Guthrie friend Earl “Joe Hill” Robinson, and Peter Fonda, who adds to the narration. There are 20 some unreleased tracks in the 100 that make up the set, that include interviews from performers and folks who knew Guthrie.

That brings us to the two lavish books. Like the pristine audio, their details and artistic presentation are outstanding. One is a reproduction of the original concert book that contains the music, the script, and more. The second, larger, 160-page book has an amazing amount of rare restored family photos, concert photos from Jim Marshall and David Gahr, drawings and cartoons, pages from his diaries, original lyrics (“This Land Is Your Land” is one to pause and reflect on, especially his edits), essays about Guthrie, press clippings, firsthand stories about the goings-on and politics at the shows, complete illustrated discographies, of not only of Woody’s own work, but the hundreds of books and records others have produced on or about him. Completed this past year, there are several pieces on how relevant Guthrie’s works are to our current world today.

The credit for the attention to details in audio, graphics, and text of this box set cannot be understated. Huge kudos goes to the producers: Woody’s daughter Nora, Steve Rosenthal for the audio, and Michael Kleff for interviews and essays. And to all the people they brought together to produce a work that is far from just nostalgic or historical. Like bad gas, history does repeat and the slogan on Woody’s guitar, sorely needs to heard loud and clear once again, “THIS MACHINE KILLS FASCISTS”