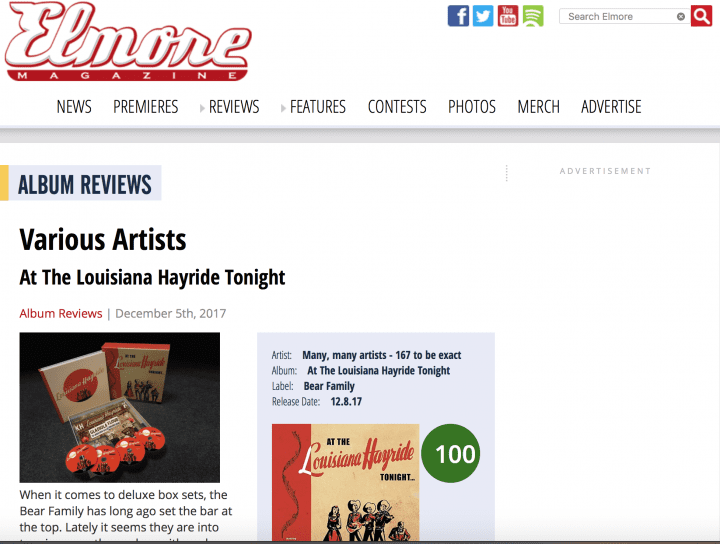 Various Artists
At The Louisiana Hayride Tonight
Album Reviews | December 5th, 2017
When it comes to deluxe box sets, the Bear Family has long ago set the bar at the top. Lately it seems they are into topping even themselves with each new release. Consider the sheer size of what they have assembled here: 20 CDs containing a total of 529 live tracks, 30 live transcriptions and commercial records made at the mothership, radio station WKHW, 167 artists including ones who were destined to become recording royalty and cultural icons: Hank Williams, Elvis Presley, Johnny Cash, Kitty Wells, George Jones, Jim Reeves, Johnny Horton, Patsy Cline and—as the Hayride ads that appear throughout the accompanying 224 page coffee table book say—“Many More” that include some obscure performers like Harmie Smith, Bailes Brothers, Cousin Emmy and others like the Browns, Marty Robbins, Sonny James, Faron Young, and Homer and Jethro, who would ride that wagon right into the rotunda at the Country Music Hall Of Fame.

The Louisiana Hayride was broadcast from 1948 to 1960, and continued on as a local show for a few more years after CBS radio networks dropped it. The fact that their broadcast recordings survived is a miracle, considering the details provided in the book on where some were unearthed. The audio restoration on them gives you the sound as if they were on the AM airwaves just last night. Not only the big stars, but the sidemen like Tillman Franks, Shot Jackson, D.J. Fontana, James Burton, all get to shine.

Although the music preserved and presented is the main star here, I cannot say enough about the value of the book. Spectacular photography throughout, both on and back stage. hundreds of illustrations, and deep research into both the unique history of the radio station KWKH going back to the 1920s , its personalities, struggles and triumphs. There are plenty of back stories on the goings on of what happened before the curtain rose weekly. The story on the origination of “Elvis has left the building,” is both an eye and ear opener when you hear the hysterical screams that accompany his performances. There are complete bios and commentary on every performer in real time as they appear on the CDs. You could say it is the mother of all liner notes and more. Browsing the book while listening to a CDs, is a sheer joy.

This is truly a museum quality archive, but presented with an artistic flair that captures the spirit of the sounds and sights of what went on. It will time travel you into a pilgrim, who would trek from several states to spend 61 cents (penny tax) and 30 cents for each young’un, to get a seat on a Saturday night for over three hours with some 3000 other folks in Shreveport Municipal Stadium, to see and hear country music history being made