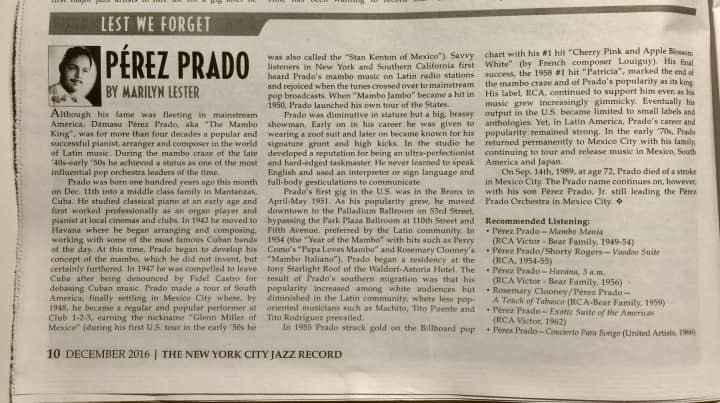 Perez Prado
BY MARILYN LESTER
Although his fame was fleeting in mainstream America, Darnaso Perez Prado, aka "The Mambo King", was for more than four decades a popular and successful pianist, arranger and composer in the world of Latin music. During the mambo craze of the late '40s-early '50s he achieved a status as one of the most influential pop orchestra leaders of the time. Prado was born one hundred years ago this month on Dec. 11th into a middle class family in Mantanzas, Cuba. He studied classical piano at an early age and first worked professionally as an organ player and pianist at local cinemas and clubs. In 1942 he moved to Havana where he began arranging and composing, working with some of the most famous Cuban bands of the day. At this time, Prado began to develop his concept of the mambo, which he did not invent, but certainly furthered. In 1947 he was compelled to leave Cuba after being denounced by Fidel Castro for debasing Cuban music. Prado made a tour of South America, finally settling in Mexico City where, by 1948, he became a regular and popular performer at Club 1-2-3, earning the nickname "Glenn Miller of Mexico" (during his first U.S. tour in the early '50s he was also called the "Stan Kenton of Mexico"). Savvy listeners in New York and Southern California first heard Prado's mambo music on Latin radio stations and rejoiced when the tunes crossed over to mainstream pop broadcasts.

When "Mambo Jambo" became a hit in 1950, Prado launched his own tour of the States. Prado was diminutive in stature but a big, brassy showman. Early on in his career he was given to wearing a zoot suit and later on became known for his signature grunt and high kicks. In the studio he developed a reputation for being an ultra-perfectionist and hard-edged taskmaster. He never learned to speak English and used an interpreter or sign language and full-body gesticulations to communicate. Prado's first gig in the U.S. was in the Bronx in April-May 1951. As his popularity grew, he moved downtown to the Palladium Ballroom on 53rd Street, bypassing the Park Plaza Ballroom at 110th Street and Fifth Avenue, preferred by the Latin community. In 1954 (the "Year of the Mambo" with hits such as Perry Como's "Papa Loves Mambo" and Rosemary Clooney's "Mambo Italiano"), Prado began a residency at the tony Starlight Roof of the Waldorf-Astoria Hotel. The result of Prado's southern migration was that his popularity increased among white audiences but diminished in the Latin community, where less pop-oriented musicians such as Machito, Tito Puente and Tito Rodriguez prevailed. In 1955 Prado struck gold on the Billboard pop chart with his #1 hit "Cherry Pink and Apple Blossom White" (by French composer Louiguy). His final success, the 1958 #1 hit "Patricia", marked the end of the mambo craze and of Prado's popularity as its king. His label, RCA, continued to support him even as his music grew increasingly gimmicky. Eventually his output in the U.S. became limited to small labels and anthologies. Yet, in Latin America, Prado's career and popularity remained strong. In the early '70s, Prado returned permanently to Mexico City with his family, continuing to tour and release music in Mexico, South America and Japan. On Sep. 14th, 1989, at age 72, Prado died of a stroke in Mexico City. The Prado name continues on, however, with his son Perez Prado, Jr. still leading the Perez Prado Orchestra in Mexico City.