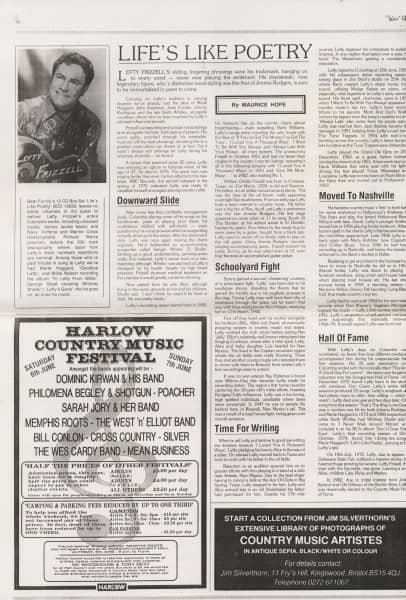 LEFTY FRIZZELL'S sliding, lingering phrasings were his trademark, hanging on to every word — never over playing the sentiment. His charismatic, now legendary figure, who's distinctive vocal styling was like that of Jimmie Rodgers, is sure to be immortalised in years to come.


Carrying on Lefty's tradition in varying degrees we've already had the likes of Merle Haggard. John Anderson, John Conlee. Johnny Rodriguez and the late Keith Whitley. alongside countless others who've been touched by Lefty's colossal influencial powers. Frizzell's songwriting and unique vocal stylings rank alongside the best, both past and present. His vocal agility enriched through his inimitable. hypnotic off-the-beat phrasings. elevating him to a position most others can dream of, at best. Yet it wasn't always rich pickings for Lefty during his relatively short life — far from it. A career that spanned some 25 years. Lefty was enjoying an upturn in fortunes when. at the age of 47. he died in 1975. The great man was singing better than ever. his two albums for his new label, ABC Records, the second released in the spring of 1975 indicated Lefty was ready to establish himself once again among country's elite.


Downward Slide
After some less than profitable management deals. Columbia placing some of his songs on the backburner, years of playing poor dates: his confidence riddled with self-doubt — even questioning his vocal prowess while his songwriting virtually dried up in the sixties. After the downward slide. Lefty was once again making the charts regularly. He'd befriended an up-and-coming songwriter called Sanger 'Whitey' D. Shafer. Striking up a good understanding. penning some really fine material, Lefty's career took on a new meaning: although 'Whitey' was alarmed at Lefty's disregard for his health, despite his high blood pressure. Frizzell shunned medical treatment on the premise it would greatly curtail his drinking. Now parted from his wife Alice, although living in the same grounds as her and his children. Shafer said. 'I don't think he cared if he lived or died. He was pretty lonely.' Lefty's recording career started back in 1950, his meteoric rise up the country charts almost breathtaking— even outselling Hank Williams. Lefty's songs were crowding the juke boxes with the likes of 'If You've Got The Money I've Got The Time', 'I Loved You A Thousand Ways', 'I Want To Be With You Always' and 'Always Late With Your Kisses'. all chart toppers. The unassuming Frizzell in October 1951 and had no fewer than singles in the country's top ten listings, repeating it all in the following January with 'I Loved You A Thousand Ways' in 1951 and 'Give Me More. More . . in 1952, also making No. 1. William Orville Frizzell was born in Corsiana. Texas. on 31st March, 1928. to Ad and Naamon. His father. an oil driller moved around plenty. This was the time of the oil boom, wells appearing overnight like mushrooms. From an early age Lefty took a keen interest in country music. His father was a big fan of Roy Acuff. yet Lefty's preference was the late Jimmie Rodgers. His first stage appearance came when at 11 he sang 'South Of The Border' at his school social in El Dorado, backed by piano. Now bitten by the music bug he soon came by a guitar. bought from a black guy. Lefty used to sneak off on family visits to play on the old guitar. Using Jimmie Rodgers' records, playing accompanying guitar. Frizzell learned his trade. Sonny, as he was called even at 12. soon four became an accomplished guitar picker.


Schoolyard Fight
Sonny gained a second 'christening' courtesy of a schoolyard fight. lefty' was born due to his southpaw stance, dispelling the theory that he gained the handle due to his pugilistic prowess in the ring. Young Lefty may well have been shy of interviews through the years, yet he wasn't that way with blue-eyed blonde Alice Harper, marrying her on 12th March, 1945. First off they lived with his mother alongside his brothers (Billy, Allen and David, all eventually enjoying careers in country music) and sisters. Lefty worked the club circuit before joining Rex 'Jelly' Elliot's relatively well known string band the Singing Cowboys, where after a brief spell, Lefty, Alice and baby daughter Lois headed for New Mexico. The lived in the Capitan mountain region where the oil fields were really booming. There they met another young couple who tempted them to move with them to Roswell, from where Lefty's first recordings were to unfold. It was on war vetertn Ray Patterson's brand new Wilcox–Gay disc recorder Lefty made his recording debut. The region's first home recorder capturing the 18-year-old's initial efforts, boasting Rodgers/Tubb influences. Lefty was a fun-loving, high spirited individual, unreliable where dates were concerned. In 1947 he was to sample life behind bars, in Roswell, New Mexico's jail. This was a result of a road house fight, being given a six month sentence.


Time For Writing
When in jail Lefty put his time to good use writing the timeless treasure 'I Loved You A Thousand Ways'. Lefty pledging his love to Alice in the way of a letter. On release Lefty moved back to Texas and took to work with his father in the oil fields. Rejection at an audition spurred him on to greater efforts with him playing in a band at a club near Artesia, New Mexico. Due to the lead singer having to cancel a date at the Ace Of Clubs in Big Spring, Texas, Lefty stepped in for him. Lefty and Alice arrived late in an old Studebaker his father had purchased for him. Despite his 174 mile journey Lefty regained his composure to suitat impress. A one-nighter that lasted over a year, I band The Westerners gaining a considerat reputation. Lefty signed to Columbia on 15th June, 195 with his subsequent debut recording sessio taking place in Jim Beck's studio on 25th Ju where Beck created Lefty's sharp honky toi sound, utilising Madge Suttee on piano, of especially vital ingredient to Lefty's early winnii sound. His finest spell, chart-wise, came in 19f. when 'I Want To Be With You Always' appeared country music's top ten. Lefty's heart movir tribute to his parents 'Mom And Dad's Wall (whom he signed over the song's royalties to) ar 'Always Late' also came from his purple patc Lefty was real hot then. Jack Starnes became t. manager in 1951 helping form Lefty's road bar The Tune Toppers. In 1954 with rock'n'n bursting across the country Lefty's dates becarr less lucrative so the Tune Toppers were disbandec Lefty played the Grand Ole Opry on 20 December, 1950, as a guest, before former joining the show in July 1951. A two week tour wi Hank Williams that same year with his f0h driving the bus played Texas, Mississippi ar Louisiana. Lefty was not too keen on Nashville ar the Opry then and moved out to Hollywood 1953.


Moved To Nashville
He became country music's 'first' to both ha, his name enshrined in Hollywood's Walkway The Stars and play the famed Hollywood Boo filling it with fans. David, Lefty's younger broth( joined him in 1956 playing honky tonks etc. After barren spell in the charts Lefty's hits became less the mid-fifties approached. Late 1958 Lefty w back again with Marty Robbins' tune 'Cigarett And Coffee Blues'. Since 1956 he had be( recording up in Nashville, well below the standa achieved in Jim Beck's studios in Dallas. Realising to get anywhere in the business he have to move to Nashville he did so in 196 Almost broke, Lefty was down to playing furniture windows, using union and house ban. when playing road houses etc. His last the success being in 1959, a stunning version Marijohn Wilkin–Danny Dill haunting 'Long Blac Veil' that made country's top ten. Lefty had to wait until 1964 for his next majc success when Don Wayne's 'Saginaw Michigal topped the charts — Lefty's first number one sine 1951. Lefty's proportion of self-penned numbei were surprisingly thin, especially betwee 1966-70. It would appear Lefty was burnt out.


Hall Of Fame
With Lefty's days on Columbia nc numbered, no fewer than four different produce accompanied him during his unspectacular fin five sessions. His 22 year association wi Columbia ended with the ironically titled 'This Air A Good Day For Leavin", the same year he gain( induction into the Songwriters Hall of Fame. 14 December 1972 found Lefty back in the stud with producer Don Grant. Lefty's entire AB sessions produced 23 songs. Lefty's songbook si had plenty more to offer, time willing — which wasn't. Lefty died one year and two days later. Or song from this session That's The Way Love Goo was a number one hit for both Johnny Rodrigu. and Merle Haggard in 1973 and 1983 respective) while Keith Whitley had Whitney Shafer add verse to 'I Never Walk Around Mirrors' ar included it on his RCA album 'Don't Close Yoa Eyes'. Lefty's final recording session of 22r October, 1974, found him t doing two song! Merle Haggard's life's Like Poetry', proving to E Lefty's last.
On 19th July, 1975, Lefty, due to appear Delaware State Fair, suffered a massive stroke, h haemorrhage proving too severe. Lefty Frizzell,  tl-man with the big smile, was gone. Leaving a wi Alice, children Lois, Ricky and Marlon. In 1982, due to initial interest from John Beland and Gib Gilbeau of the Burrito Bros, Lefi was deservedly elected to the Country Music Hall of Fame.