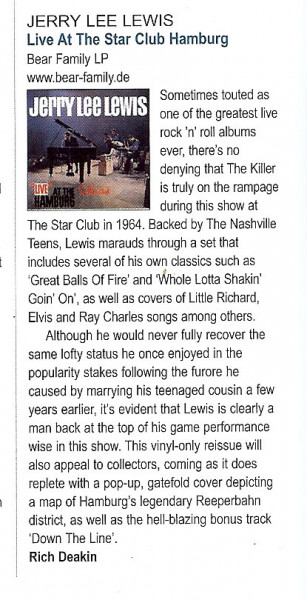 JERRY LEE LEWIS
Live At The Star Club Hamburg
Bear Family LP www.bear-family.de Sometimes touted as one of the greatest live rock 'n' roll albums euer, there's no denying that The Killer is truly an the rampage during this show at The Star Club in 1964. Backed by The Nashville Teens, Lewis marauds through a set that includes several of his own classics such as 'Great Balls Of Fire' and 'Whole Lotta Shakin' Goin' On', as well as covers of Little Richard, Elvis and Ray Charles songs among others. Although he would neuer fully recover the same lofty status he once enjoyed in the popularity stakes following the furore he caused by marrying his teenaged cousin a few years earlier, it's evident that Lewis is clearly a man back at the top of his game performance wise in this show. This vinyl-only reissue will also appeal to collectors, coming as it does replete with a pop-up, gatefold cover depicting a map of Hamburg's legendary Reeperbahn district, as well as the hell-blazing bonus kack 'Down The Line'. Rich Deakin