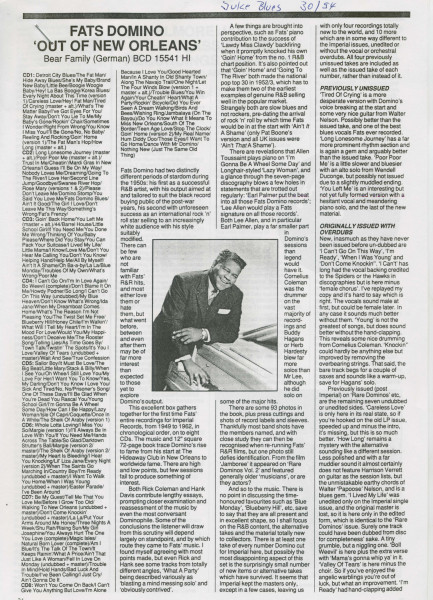 Fats Domino had two distinctly different periods of stardom during the 1950s: his first as a successful R&B artist, with his output aimed at and tailored to suit the black record buying public of the post-war years, his second with unforeseen success as an international rock 'n' roll star selling to an increasingly white audience with his style suitably modified. There can be few who are not familiar with Fats' R&R hits, and most either love them or hate them, but what went before, between and even after them may be of far more interest than expected to those yet to explore Domino's output. This excellent box gathers together for the first time Fats' entire recordings for Imperial Records, from 1949 to 1962, in chronological order, on to eight CDs.

The music and 12" square 72-page book trace Domino's rise to fame from his start at The Hideaway Club in New Orleans to worldwide fame. There are high and low points, but few sessions fail to produce something of interest. Both Rick Coleman and Hank Davis contribute lengthy essays, prompting closer examination and reassessment of the music by even the most conversant Dominophile. Some of the conclusions the listener will draw from this scrutiny will depend largely on standpoint, and by which route they came to Fats' music. I found myself agreeing with most points made, but even Rick and Hank see some tracks from totally different angles, 'What A Party' being described variously as 'blasting a mind messing solo' and `obviously contrived'.
fatsS

A few things are brought into perspective, such as Fats' piano contribution to the success of 'Lawdy Miss Clawdy' backfiring when it promptly knocked his own 'Goin' Home' from the no. 1 R&B chart position. It's also pointed out that `Goin' Home' and 'Going To The River' both made the national pop top 30 in 1952/3, which has to make them two of the earliest examples of genuine R&B selling well in the popular markdt. Strangely both are slow blues and not rockers, pre-dating the arrival of rock 'n' roll by which time Fats would be in at the start with 'Ain't It A Shame' (only Pat Boone's version and all UK issues were 'Ain't That A Shame').

There are revelations that Allen Toussaint plays piano on `I'm Gonna Be A Wheel Some Day' and Longhair-styled 'Lazy Woman', and a glance through the seven-page discography blows a few holes in statements that are trotted out regularly: 'Earl Palmer put the beat into all those Fats Domino records'; tee Allen would play a Fats signature on all those records'. Both Lee Allen, and in particular Earl Palmer, play a far smaller part in Domino's sessions than legend would have it. Cornelius Coleman was the drummer on the vast majority of record-ings and Buddy Hagans or Herb Hardesty blew far more solos than Mr Lee, although he did solo on some of the major hits.

There are some 93 photos in the book, plus press cuttings and shots of record labels and sleeves. Thankfully most band shots have the members named, and with close study they can then be recognised when re-running Fats' R&R films, but one photo still defies identification. From the film `Jamboree' it appeared on 'Rare Dominos Vol. 2' and featured generally older 'musicians', or are they actors? And so to the music. There is no point in discussing the time-honoured favourites such as 'Blue Monday', 'Blueberry Hill', etc, save to say that they are all present and in excellent shape, so I shall focus on the R&B content, the alternative takes and the material totally new to collectors.

There is at least one take of every number Domino cut for Imperial here, but possibly the most disappointing aspect of this set is the surprisingly small number of new items or alternative takes which have survived. It seems that Imperial kept the masters only, except in a few cases, leaving us with only four recordings totally new to the world, and 10 more which are in some way different to the Imperial issues, unedited or without the vocal or orchestral overdubs. All four previously unissued takes are included as well as the issued take of each number, rather than instead of it.


PREVIOUSLY UNISSUED 'Tired Of Crying' is a more desperate version with Domino's voice breaking at the start and some very nice guitar from Walter Nelson. Possibly better than the issued take, and one of the best blues vocals Fats ever recorded. 'Long Lonesome Journey' has a far more prominent rhythm section and is again a gem and arguably better than the issued take. 'Poor Poor Me' is a little slower and bluesier with an alto solo from Wendell Duconge, but possibly not issued due to a slightly muddled ending. 'You Left Me' is an interesting but not yet fully formed version with a hesitant vocal and meandering piano solo, and the last of the new material.
ORIGINALLY ISSUED WITH OVERDUBS New, inasmuch as they have never been issued before un-dubbed are 'I Can't Go On This Way', `I'm Ready', 'When I Was Young' and `Don't Come Knockin". 'I Can't' has long had the vocal backing credited to the Spiders or the Hawks in discographies but is here minus `female chorus'. I've replayed my copy and it's hard to say which is right.

The vocals sound male at first, but could be female later. In any case it sounds much better without them. 'Young' is not the greatest of songs, but does sound better without the hand-clapping. This reveals some nice drumming from Cornelius Coleman. `Knockin" could hardly be anything else but improved by removing the overbearing strings. That said, the bare track begs for a couple of saxes and sounds like a warm-up, save for Hagans' solo. Previously issued (post Imperial) on 'Rare Dominos' etc, are the remaining seven undubbed or unedited sides. 'Careless Love' is only here in its real state, so if you're hooked on the old LP issue. speeded up and minus the intro, it's missing, but this is so much better. 'How Long' remains a mystery with the alternative sounding like a different session. Less polished and with a far muddier sound it almost certainly does not feature Harrison Verrett on guitar as the session lists, but the unmistakable earthy chords of Walter 'Papoose' Nelson, and is a blues gem. 'I Lived My Life' was unedited only on the Imperial single issue, and the original master is lost, so it is here only in the edited form, which is identical to the 'Rare Dominos' issue. Surely one track could have been dubbed from disc for completeness' sake.

A tiny grumble, but a niggling one. 'Boll Weevil' is here plus the extra verse with 'Mama's gonna whip ya' in it. 'Valley Of Tears' is here minus the choir. So if you've enjoyed the angelic warblings you're out of luck, but what an improvement. `I'm Ready' had hand-clapping added