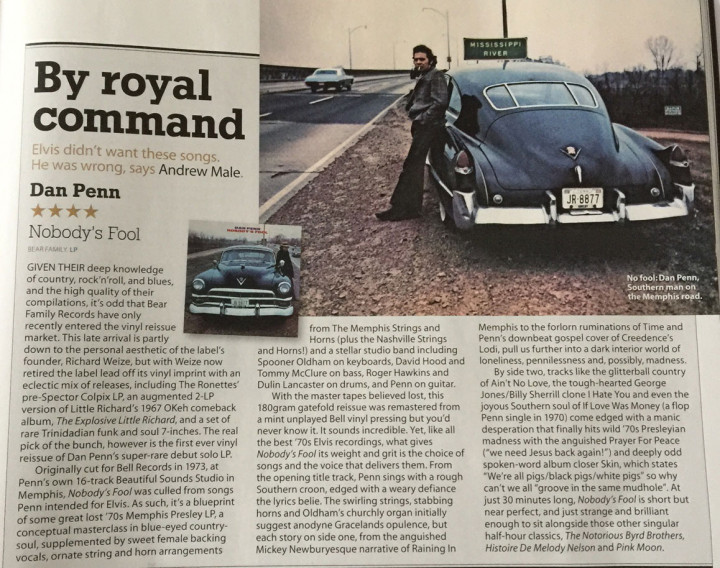 By royal Command didn't want these song, was wrong, says Andrew Male. Dan Penn **** Nobody's Fool
GIVEN THEIR deep knowledge of country, rock'n'roll, and blues, and the high quality of their compilations, it's odd that Bear Family Records have only recently entered the vinyl reissue market. This late arrival is partly down to the personal aesthetic of the label's founder, Richard Weise, but with Weise now retired the label lead off its vinyl imprint with an eclectic mix of releases, including The Ronettes' pre-Spector Colpix LP, an augmented 2-LP version of Little Richard's 1967 OKeh comeback album, The Explosive Little Richard, and a set of rare Trinidadian funk and soul 7-inches. The real pick of the bunch, however is the first ever vinyl reissue of Dan Penn's super-rare debut solo LP. Originally cut for Bell Records in 1973, at Penn's own 16-track Beautiful Sounds Studio in Memphis, Nobody's Fool was culled from songs Penn intended for Elvis. As such, it's a blueprint of some great lost '70s Memphis Presley LP, a conceptual masterclass in blue-eyed country-soul, supplemented by sweet female backing vocals, ornate string and horn arrangements
from The Memphis Strings and Horns (plus the Nashville Strings and Horns!) and a stellar studio band including Spooner Oldham on keyboards, David Hood and Tommy McClure on bass, Roger Hawkins and Dulin Lancaster on drums, and Penn on guitar. With the master tapes believed lost, this 180gram gatefold reissue was remastered from a mint unplayed Bell vinyl pressing but you'd never know it. It sounds incredible. Yet, like all the best '70s Elvis recordings, what gives Nobody's Fool its weight and grit is the choice of songs and the voice that delivers them. From the opening title track, Penn sings with a rough Southern croon, edged with a weary defiance the lyrics belie. The swirling strings, stabbing horns and Oldham's churchly organ initially suggest anodyne Gracelands opulence, but each story on side one, from the anguished Mickey Newburyesque narrative of Raining In Memphis to the forlorn ruminations of Time and Penn's downbeat gospel cover of Creedence's Lodi, pull us further into a dark interior world of loneliness, pennilessness and, possibly, madness. By side two, tracks like the glitterball country of Ain't No Love, the tough-hearted George Jones/Billy Sherrill clone I Hate You and even the joyous Southern soul of If Love Was Money (a flop Penn single in 1970) come edged with a manic desperation that finally hits wild '70s Presleyian madness with the anguished Prayer For Peace ("we need Jesus back again!") and deeply odd spoken-word album closer Skin, which states -We're all pigs/black pigs/white pigs" so why can't we all "groove in the same mudhole. At just 30 minutes long, Nobody's Fool is short but near perfect, and just strange and brilliant enough to sit alongside those other singular half-hour classics, The Notorious Byrd Brothers, Histoire De Melody Nelson and Pink Moon.