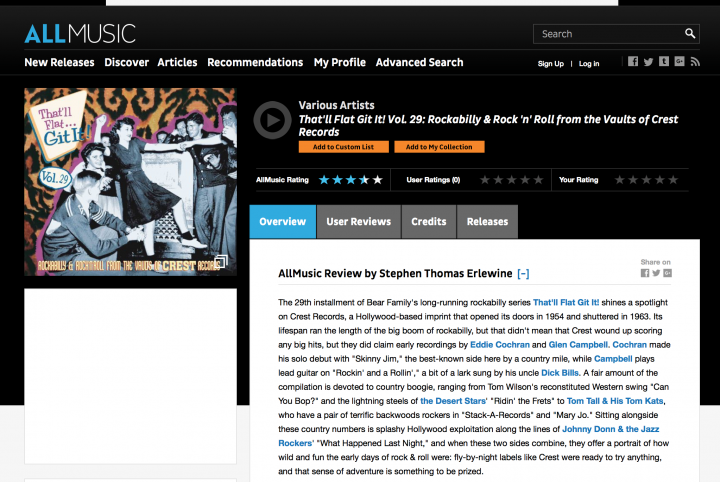 AllMusic Review by Stephen Thomas Erlewine [-]
The 29th installment of Bear Family's long-running rockabilly series That'll Flat Git It! shines a spotlight on Crest Records, a Hollywood-based imprint that opened its doors in 1954 and shuttered in 1963. Its lifespan ran the length of the big boom of rockabilly, but that didn't mean that Crest wound up scoring any big hits, but they did claim early recordings by Eddie Cochran and Glen Campbell. Cochran made his solo debut with "Skinny Jim," the best-known side here by a country mile, while Campbell plays lead guitar on "Rockin' and a Rollin'," a bit of a lark sung by his uncle Dick Bills. A fair amount of the compilation is devoted to country boogie, ranging from Tom Wilson's reconstituted Western swing "Can You Bop?" and the lightning steels of the Desert Stars' "Ridin' the Frets" to Tom Tall & His Tom Kats, who have a pair of terrific backwoods rockers in "Stack-A-Records" and "Mary Jo." Sitting alongside these country numbers is splashy Hollywood exploitation along the lines of Johnny Donn & the Jazz Rockers' "What Happened Last Night," and when these two sides combine, they offer a portrait of how wild and fun the early days of rock & roll were: fly-by-night labels like Crest were ready to try anything, and that sense of adventure is something to be prized.