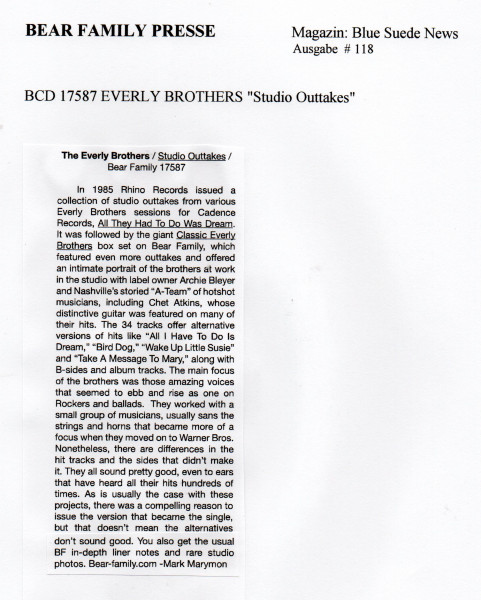 In 1985 Rhino Records issued a collection of studio outtakes from various Everly Brothers sessions for Cadence Records, All They Had To Do Was Dream. It was followed by the giant Classic Everly Brothers box set on Bear Family, which featured even more outtakes and offered an intimate portrait of the brothers at work in the studio with label owner Archie Bleyer and Nashville's storied "A-Team" of hotshot musicians, including Chet Atkins, whose distinctive guitar was featured on many of their hits. The 34 tracks offer alternative versions of hits like "All I Have To Do Is Dream," "Bird Dog," "Wake Up Little Susie" and "Take A Message To Mary," along with B-sides and album tracks.

The main focus of the brothers was those amazing voices that seemed to ebb and rise as one on Rockers and ballads. They worked with a small group of musicians, usually sans the strings and horns that became more of a focus when they moved on to Warner Bros. Nonetheless, there are differences in the hit tracks and the sides that didn't make it. They all sound pretty good, even to ears that have heard all their hits hundreds of times. As is usually the case with these projects, there was a compelling reason to issue the version that became the single, but that doesn't mean the alternatives don't sound good. You also get the usual BF in-depth liner notes and rare studio photos. Bear-family.com -Mark Marymon