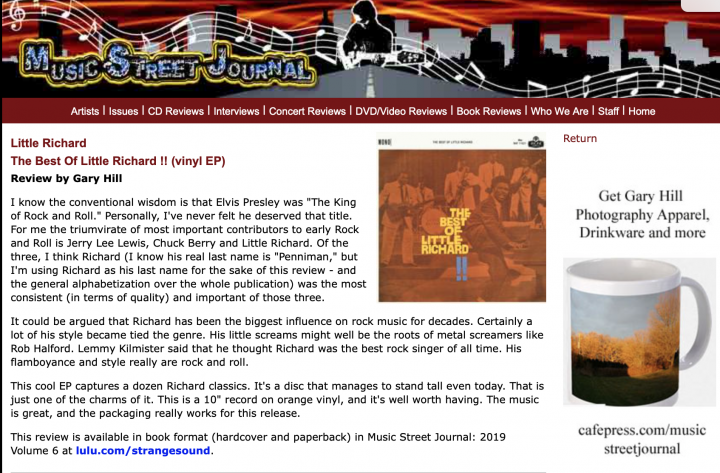 Review by Gary Hill
I know the conventional wisdom is that Elvis Presley was "The King of Rock and Roll." Personally, I've never felt he deserved that title. For me the triumvirate of most important contributors to early Rock and Roll is Jerry Lee Lewis, Chuck Berry and Little Richard. Of the three, I think Richard (I know his real last name is "Penniman," but I'm using Richard as his last name for the sake of this review - and the general alphabetization over the whole publication) was the most consistent (in terms of quality) and important of those three.

It could be argued that Richard has been the biggest influence on rock music for decades. Certainly a lot of his style became tied the genre. His little screams might well be the roots of metal screamers like Rob Halford. Lemmy Kilmister said that he thought Richard was the best rock singer of all time. His flamboyance and style really are rock and roll.

This cool EP captures a dozen Richard classics. It's a disc that manages to stand tall even today. That is just one of the charms of it. This is a 10" record on orange vinyl, and it's well worth having. The music is great, and the packaging really works for this release.