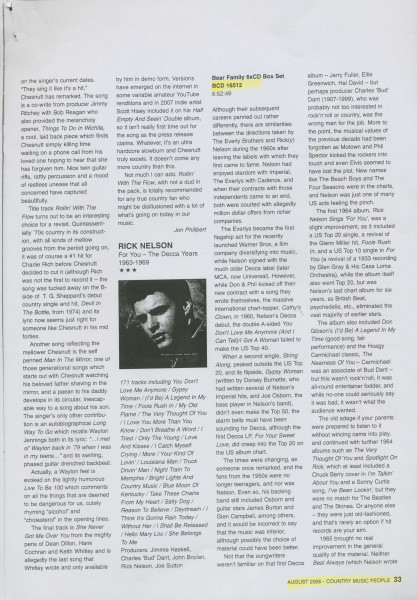 171 tracks - Bear Family 6xCD Box Set album — Jerry Fuller, Ellie BCD 16512 Greenwich, Hal David — but 6:52:49 perhaps producer Charles 'Bud' Dant (1907-1999), who was probably not too interested in rock'n'roll or country, was the wrong man for the job. More to the point, the musical values of the previous decade had been forgotten as Motown and Phil Spector kicked the rockers into touch and even Elvis seemed to have lost the plot. New names like The Beach Boys and The Four Seasons were in the charts. and Nelson was just one of many US acts feeling the pinch. The first 1964 album, Rick Nelson Sings For You', was a slight improvement, as it included a US Top 20 single. a revival of the Glenn Miller hit, Fools Rush In, and a US Top 10 single in For You (a revival of a 1933 recording by Glen Gray & His Casa Loma Orchestra), while the album itself also went Top 20. but was Nelson's last chart album for six years, as British Beat, psychedelic, etc., eliminated the vast majority of earlier stars.

The album also included Don Gibson's (I'd Be) A Legend In My Time (good song, fair performance) and the Hoagy Carmichael classic, The Nearness Of You — Carmichael was an associate of Bud Dant —but this wasn't rock'n'roll, it was all-round entertainer fodder. and while no-one could seriously say it was bad, it wasn't what the audience wanted. The old adage if your parents were prepared to listen to it without wincing came into play. and continued with further 1964 albums such as The Very Thought Of You and Spotlight On Rick, which at least included a Chuck Berry cover in I'm Talkin' About You and a Sonny Curtis song, I've Been Lookin', but they were no match for The Beatles and The Stones. Or anyone else — they were just old-fashioned. and that's rarely an option if hit records are your aim. 1965 brought no real improvement in the general quality of the material. Neither Best Always (which Nelson wrote Although their subsequent careers panned out rather differently, there are similarities between the directions taken by The Everly Brothers and Rick(y) Nelson during the 1960s after leaving the labels with which they first came to fame.

Nelson had enjoyed stardom with Imperial, The Everlys with Cadence, and when their contracts with those independents came to an end, both were courted with allegedly million dollar offers from richer companies. The Everlys became the first flagship act for the recently launched Warner Bros, a film company diversifying into music, while Nelson signed with the much older Decca label (later MCA. now Universal). However, while Don & Phil kicked off their new contract with a song they wrote themselves, the massive international chart-topper. Cathy's Clown, in 1960, Nelson's Decca debut, the double A-sided You Don't Love Me Anymore (And I Can Tell)/1 Got A Woman failed to make the US Top 40. When a second single. String Along, peaked outside the US Top 20, and its flipside, Gypsy Woman (written by Dorsey Burnette, who had written several of Nelson's Imperial hits, and Joe Osborn, the bass player in Nelson's band), didn't even make the Top 50, the alarm bells must have been sounding for Decca, although the first Decca LP, For Your Sweet Love, did creep into the Top 20 on the US album chart.

The times were changing, as someone once remarked, and the fans from the 1950s were no longer teenagers, and nor was Nelson. Even so, his backing band still included Osborn and guitar stars James Burton and Glen Campbell, among others. and it would be incorrect to say that the music was inferior, although possibly the choice of material could have been better. Not that the songwriters weren't familiar on that first Decca when signing his autograph for fans — he did it on my copy of the Legendary Masters double LP) nor Love And Kisses (the title track, another written by Sonny Curtis) were of particular note, and to all intents and purposes the boy was going down the tubes. Love And Kisses, in particular, was probably a mistake on the part of Ozzie Nelson, Rick's father — it was originally a stage play to which Ozzie purchased the rights with a view to turning it into a movie with music starring Rick and his wife, Kristin. Nelson said of the album: "That was in my robot period.

You know, wind me up and... The album from that film lacked direction and everything else, because I didn't know what I wanted to do at all during that period." Happily (or history would have been altered for the worse), in early 1966, someone (supposedly James Burton) suggested that Rick should have a crack at some country music, and it's probably fair to say that had he not recorded 1966's Bright Lights And Country Music and the following year's Country Fever LPs, this review might not have appeared in this magazine. Nelson was later identified with country/rock via The Stone Canyon Band in the early 1970s, as that combo initially included pedal steel artist Tom Brumley (ex Buck Owens) and Randy Meisner (ex Poco and later a founder member of the Eagles.) In addition, some early Nelson recordings were of the rockabilly genre, so country wasn't a totally new direction. Some may theorise that these two albums are among the earliest in the country/rock genre, pre-dating Sweetheart Of The Rodeo by The Byrds and Safe At Home by The International Submarine Band, but it seems unlikely that Nelson was attempting anything more than to revive his flagging career. and if he happened to create country/rock as a by-product...

The repertoire across the two LPs includes three Willie Nelson songs, two predictable in Hello Walls and Funny How Time Slips Away, and one, Congratulations, less so, but they're all performed fairly straight, two Merle Travis songs (the OK No Vacancy and the rather better Kentucky Means Paradise), as well as Louisiana Man, Terry Fell's great Truck Drivin' Man, and staples like Night Train To Memphis (very good), Bill Anderson's title track to the earlier album, some frantic bluegrass on Salty Dog and even a couple of covers of Presley's Sun material in Blue Moon Of Kentucky and Mystery Train. All very acceptable, and my stomach didn't even rebel at the version of Welcome To My World. The reason this was all so well done has a lot to do with the backing musicians — guitarists James Burton, of course, Clarence White, Glen Campbell (then as much a superpicker as the dream of the everyday housewife), Glen D. Hardin on piano, Billy Ray Latham on banjo and Roger Bush on double bass (both at the time in The Kentucky Colonels with Clarence), Joe Osborn on bass guitar, etc. — a very hot lot indeed.

Had there been any justice, these albums should have been highly rated at the time, but of course Nelson was then regarded as a has-been, and neither album made the US chart. But at least Nelson sounded as if he was enjoying the music, as opposed to the "robot period," and he wasn't about to revert to that all round family entertainer stuff. The next significant move was the use of John Boylan as producer. Boylan was part of a gaggle of musicians, producers and writers under the wing of Charles Koppelman and Dan Rubin, and other members of that clique included Gary Bonner and Alan Gordon, who had written hits for The Turtles, as well as Tim Hardin and John Sebastian. Boylan not only produced both 1968's Another Side Of Rick and 1969's Perspective albums, but also had a hand in writing six of the songs on the LPs, while they also included four Tim Hardin songs, such as Reason To Believe and Don't Make Promises, as well as John Sebastian's Daydream. However, few of these were inspired versions, and personally the highlights of this part of Nelson's attempts to restore his flagging popularity are his versions of several songs by the then hardly known Randy Newman, including I Think It's Gonna Rain Today, So Long Dad and Love Story, as well as the rather theatrical Wait Till Next Year.

It was around this time that some of the ace musicians, such as James Burton and Joe Osborn, also left Nelson's band. In the spring of 1969, Boylan took Nelson to see Poco, just starting after Buffalo Springfield fell apart, and Randy Meisner, who wasn't too happy in Poco, was invited to join Nelson's new group, The Stone Canyon Band, to which Meisner also brought guitarist Allen Kemp and drummer Pat Shanahan, with whom he'd been playing in a Denver band called The Soul Survivors and later The Poor. The tracks involving this line-up (from the tail-end of CD5 in this set) immediately sound far more convincing than the Boylan-produced albums: Tim Hardin's Lady Came From Baltimore, a much better version of I Think It's Gonna Rain Today, Bob Dylan's She Belongs To Me and If You Gotta Go, Go Now (the latter much more urgent than the Manfred Mann hit version), and even a couple of Nelson originals, Promises and Easy To Be Free.

Late 1969 even brought a US Top 40 single, his first in over five years, with a cover of Bob Dylan's She Belongs To Me with the band augmented by Buddy Emmons on steel and Larry Knechtel on piano. The box set concludes with the excellent In Concert LP from 1970, which restored Nelson to the US album chart, by which time pedal steel artist Tom Brumley had joined The Stone Canyon Band, and Nelson was launched on what was arguably the last successful phase of his career. The subsequent Stone Canyon Band albums like Rick Sings Nelson and Rudy The Fifth are not included here, but certainly have been freely available in the CD era, as has some of the earlier stuff in this set, although without the legendary Bear Family annotation. As usual, plaudits to Richard Weize for getting this warts and all collection together, and also to sleeve note writer Todd Everett and to my chum Rocky Prior, a Nelson freak from the NatWest. John Tobler