Press Archive - Louis Jordan - Somebody Up There Digs Me (10inch LP) 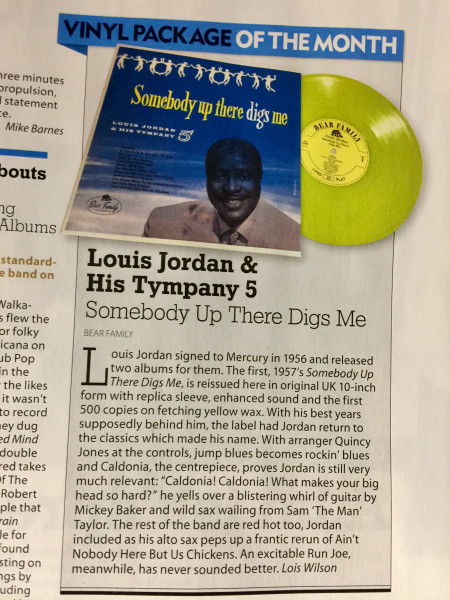 Louis Jordan & His Tympany 5 Somebody Up There Digs Me
BEAR FAMILY
Louis Jordan signed to Mercury in 1956 and released two albums for them. The first, 1957's Somebody Up There Digs Me, is reissued here in original UK 10-inch form with replica sleeve, enhanced sound and the first 500 copies on fetching yellow wax. With his best years supposedly behind him, the label had Jordan return to the classics which made his name. With arranger Quincy Jones at the controls, jump blues becomes rockin' blues and Caldonia, the centrepiece, proves Jordan is still very much relevant: "Caldonia! Caldonia! What makes your big head so hard?" he yells over a blistering whirl of guitar by Mickey Baker and wild sax wailing from Sam 'The Man' Taylor. The rest of the band are red hot too, Jordan included as his alto sax peps up a frantic rerun of Ain't Nobody Here But Us Chickens. An excitable Run Joe, meanwhile, has never sounded better. Lois Wilson