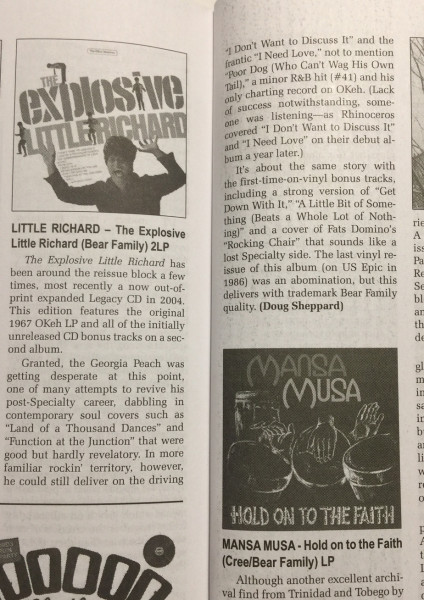 LITTLE RICHARD – The Explosive Little Richard (Bear Family) 2LP The Explosive Little Richard has been around the reissue block a few times, most recently a now out-of-print expanded Legacy CD in 2004. This edition features the original 1967 OKeh LP and all of the initially unreleased CD bonus tracks on a sec-ond album. Granted, the Georgia Peach was getting desperate at this point, one of many attempts to revive his post-Specialty career, dabbling in contemporary soul covers such as "Land of a Thousand Dances" and "Function at the Junction" that were good but hardly revelatory. In more familiar rockin' territory, however, he could still deliver on the driving
Don't Want to Discuss It" and the otitiC "I Need Love," not to mention Poor Dog (Who Can't Wag His Own Tail)," a minor R&B hit (#41) and his only charting record on OKeh. (Lack of success notwithstanding, some-one was listening—as Rhinoceros covered "I Don't Want to Discuss It" and "I Need Love" on their debut al-bum a year later.) It's about the same story with the first-time-on-vinyl bonus tracks, including a strong version of "Get Down With It," "A Little Bit of Some-thing (Beats a Whole Lot of Noth-ing)" and a cover of Fats Domino's "Rocking Chair" that sounds like a lost Specialty side. The last vinyl re-issue of this album (on US Epic in 1986) was an abomination, but this delivers with trademark Bear Family quality. (Doug Sheppard)