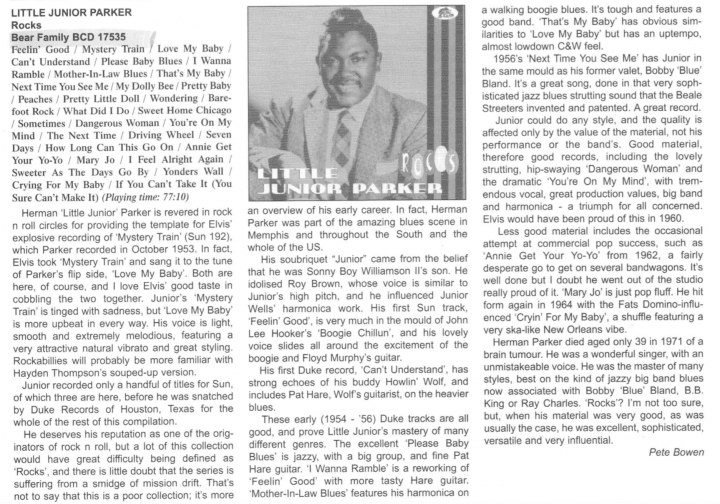 LITTLE JUNIOR PARKER Rocks Bear Family BCD 17535 Feelin' Good / Mystery Train / Love My Baby Can't Understand / Please Baby Blues / I Wanna Ramble / Mother-In-Law Blues / That's My Baby / Next Time You See Me / My Dolly Bee / Pretty Baby / Peaches / Pretty Little Doll / Wondering / Bare-foot Rock / What Did I Do / Sweet Home Chicago / Sometimes / Dangerous Woman / You're On My Mind / The Next Time / Driving Wheel / Seven Days / How Long Can This Go On / Annie Get Your Yo-Yo / Mary Jo / I Feel Alright Again Sweeter As The Days Go By / Yonders Wall / Crying For My Baby / If You Can't Take It (You Sure Can't Make It) (Playing time: 77:10)

Herman 'Little Junior' Parker is revered in rock n roll circles for providing the template for Elvis' explosive recording of 'Mystery Train' (Sun 192). which Parker recorded in October 1953. In fact. Elvis took 'Mystery Train' and sang it to the tune of Parker's flip side. 'Love My Baby'. Both are here, of course, and I love Elvis' good taste in cobbling the two together. Junior's 'Mystery Train' is tinged with sadness. but 'Love My Baby' is more upbeat in every way. His voice is light. smooth and extremely melodious. featuring a very attractive natural vibrato and great styling. Rockabillies will probably be more familiar with Hayden Thompson's souped-up version. Junior recorded only a handful of titles for Sun. of which three are here, before he was snatched by Duke Records of Houston.

Texas for the whole of the rest of this compilation. He deserves his reputation as one of the orig-inators of rock n roll. but a lot of this collection would have great difficulty being defined as 'Rocks'. and there is little doubt that the series is suffering from a smidge of mission drift. That's not to say that this is a poor collection: it's more an overview of his early career. In fact. Herman Parker was part of the amazing blues scene in Memphis and throughout the South and the whole of the US. His soubriquet "Junior- came from the belief that he was Sonny Boy Williamson il's son. He idolised Roy Brown, whose voice is similar to Junior's high pitch. and he influenced Junior Wells' harmonica work. His first Sun track, 'Feelin' Good'. is very much in the mould of John Lee Hooker's 'Boogie Chillun', and his lovely voice slides all around the excitement of the boogie and Floyd Murphy's guitar. His first Duke record. 'Can't Understand, has strong echoes of his buddy Howlin' Wolf. and includes Pat Hare. Wolf's guitarist. on the heavier blues. These early (1954 - '56) Duke tracks are all good, and prove Little Junior's mastery of many different genres.

The excellent 'Please Baby Blues' is jazzy, with a big group, and fine Pat Hare guitar. Wanna Ramble' is a reworking of 'Feelin' Good' with more tasty Hare guitar. 'Mother-In-Law Blues' features his harmonica on a walking boogie blues. It's tough and features a good band. 'That's My Baby' has obvious sim-ilarities to 'Love My Baby' but has an uptempo, almost lowdown C&W feel. 1956's 'Next Time You See Me' has Junior in the same mould as his former valet. Bobby 'Blue' Bland. It's a great song, done in that very soph-isticated jazz blues strutting sound that the Beale Streeters invented and patented. A great record. Junior could do any style. and the quality is affected only by the value of the material. not his performance or the band's. Good material. therefore good records. including the lovely strutting. hip-swaying 'Dangerous Woman' and the dramatic 'You're On My Mind'. with trem-endous vocal, great production values, big band and harmonica - a triumph for all concerned. Elvis would have been proud of this in 1960.

Less good material includes the occasional attempt at commercial pop success. such as 'Annie Get Your Yo-Yo' from 1962, a fairly desperate go to get on several bandwagons. It's well done but I doubt he went out of the studio really proud of it. 'Mary Jo' is just pop fluff. He hit form again in 1964 with the Fats Domino-influ-enced Cryin' For My Baby'. a shuffle featuring a very ska-like New Orleans vibe. Herman Parker died aged only 39 in 1971 of a brain tumour. He was a wonderful singer. with an unmistakeable voice. He was the master of many styles. best on the kind of jazzy big band blues now associated with Bobby 'Blue' Bland, B.B. King or Ray Charles. 'Rocks'? I'm not too sure, but. when his material was very good. as was usually the case, he was excellent, sophisticated. versatile and very influential.