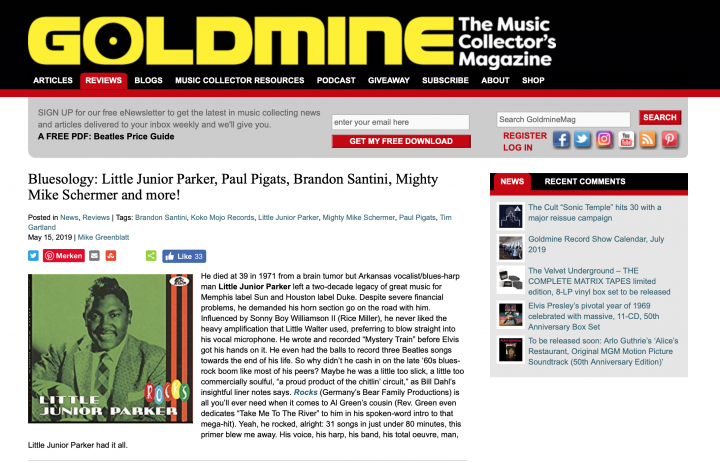 He died at 39 in 1971 from a brain tumor but Arkansas vocalist/blues-harp man Little Junior Parker left a two-decade legacy of great music for Memphis label Sun and Houston label Duke. Despite severe financial problems, he demanded his horn section go on the road with him. Influenced by Sonny Boy Williamson II (Rice Miller), he never liked the heavy amplification that Little Walter used, preferring to blow straight into his vocal microphone. He wrote and recorded “Mystery Train” before Elvis got his hands on it. He even had the balls to record three Beatles songs towards the end of his life. So why didn’t he cash in on the late ‘60s blues-rock boom like most of his peers? Maybe he was a little too slick, a little too commercially soulful, “a proud product of the chitlin’ circuit,” as Bill Dahl’s insightful liner notes says. Rocks (Germany’s Bear Family Productions) is all you’ll ever need when it comes to Al Green’s cousin (Rev. Green even dedicates “Take Me To The River” to him in his spoken-word intro to that mega-hit). Yeah, he rocked, alright: 31 songs in just under 80 minutes, this primer blew me away. His voice, his harp, his band, his total oeuvre, man, Little Junior Parker had it all.