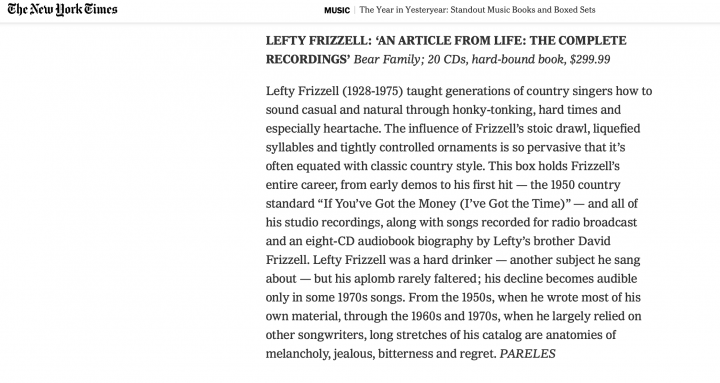 The Year in Yesteryear: Standout Music Books and Boxed Sets

While streaming opened doors for many of 2018's most exciting new artists, retrospective boxed sets and photo books held the keys to gems from the past, from a revelatory 50th anniversary reissue of "The Beatles" (known best as the White Album) to "More Blood, More Tracks: The Bootleg Series Vol. 14," an expanded version of Bob Dylan's 1975 masterpiece, "Blood on the Tracks." Here, the pop music critics of The New York Times choose some of the most notable collections of 2018.

Lefty Frizzell (1928-1975) taught generations of country singers how to sound casual and natural through honky-tonking, hard times and especially heartache. The influence of Frizzell's stoic drawl, liquefied syllables and tightly controlled ornaments is so pervasive that it's often equated with classic country style. This box holds Frizzell's entire career, from early demos to his first hit — the 1950 country standard "If You've Got the Money (I've Got the Time)" — and all of his studio recordings, along with songs recorded for radio broadcast and an eight-CD audiobook biography by Lefty's brother David Frizzell. Lefty Frizzell was a hard drinker — another subject he sang about — but his aplomb rarely faltered; his decline becomes audible only in some 1970s songs. From the 1950s, when he wrote most of his own material, through the 1960s and 1970s, when he largely relied on other songwriters, long stretches of his catalog are anatomies of melancholy, jealous, bitterness and regret. PARELES