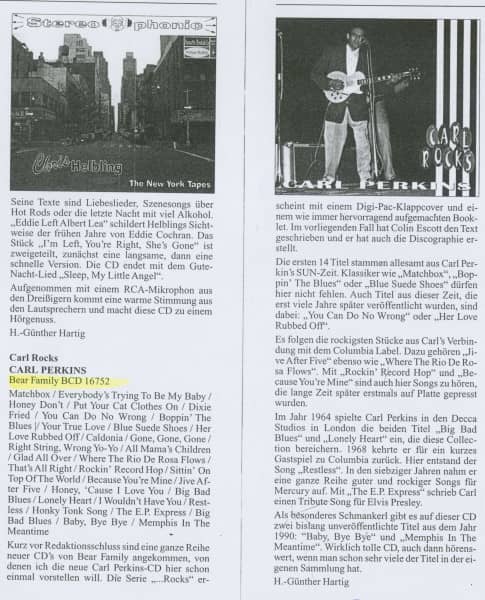 Shortly before the editorial deadline, a whole series of new CDs from Bear Family have arrived, of which I would like to present the new Carl Perkins CD here. The series"...Rocks" comes with a Digi-Pac gatefold cover and an excellent book-let. In this case Colin Escott wrote the text and he also wrote the discography. The first 14 titles are all from Carl Perkin's SUN time. Classics like "Matchbox", "Bop-pin' The Blues" or "Blue Suede Shoes" are a must here. Titles from this period, which were only published many years later, are also included: "You Can Do No Wrong" or "Her Love Rubbed Off'. The following are the most rocky pieces from Carl's connection with the Columbia label.

These include "Ji-ve After Five" and "Where The Rio De Ro-sa Flows". With "Rockin' Record Hop" and "Be-cause You're Mine" songs can also be heard here that were pressed onto records for the first time a long time later. In 1964 Carl Perkins recorded the two titles "Big Bad Blues" and "Lonely Heart" at Decca Studios in London, which enrich this collection... In 1968 he returned to Columbia for a short guest performance. This is where the song "Restless" was written. In the seventies he recorded a whole series of good and rocking songs for Mercury. With "The E.P. Express" Carl wrote a tribute song for Elvis Presley.

As a special treat, this CD includes previously unreleased tracks from 1990: "Baby, Bye Bye" and "Memphis In The Meantime". Really great CD, even if you already have a lot of the tracks in your own collection. H.-Günther Hartig