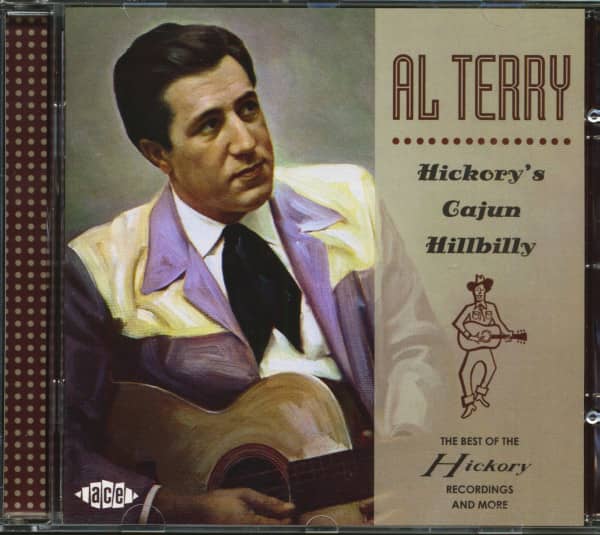 (ACE Records) 26 tracks with 12 page booklet; Between 1955 and 1958, Terry recorded exemplary hillbilly and country, and even flirted with rockabilly, with uniformly excellent results. Besides 'Lucille', he's also remembered for gems like 'Watch Dog' and the Johnny Cash-like 'Roughneck Blues', both of which can be heard here in premium sound quality. Also here are musicians of the calibre of the Kershaw Brothers, Barkdull, Chet Atkins, Hank Garland, Floyd Cramer, Tommy Jackson and Al's steel guitar-playing brother Bob, who also composed many of the featured tracks under his real name of Charles Theriot. There hasn't been an Al Terry anthology since Bear Family's vinyl album, released almost 25 years ago!

Throughout its life (early 50s-mid 70s) Nashville’s Hickory label operated chiefly as a shop window for the copyrights of its publisher ‘parent’, Acuff-Rose Music. Right from the start, almost every song that appeared on the label was from the A&R catalogue, while most of the artists who recorded for the label were also signed to the publishing company. Although the label never really attempted to compete with Music City’s ‘big boys’ in terms of artist profile and chart records, it can still boast a number of genuine ‘classic hits’ throughout its catalogue, not to mention a selection of artists who would have been an asset to any roster.
One of the first Hickory artists – and, without question, one of the finest ever to record for the yellow and brown imprint – was Allison Theriot better known as Al Terry. His original 1954 version of Good Deal, Lucille was one of Hickory’s first releases and it was also the label’s first ever chart hit. It was popular enough for Terry to re-cut it in 1957, in a rock‘n’roll-influenced version that’s included here alongside the original. Today it’s considered as much of a Cajun Classic as its obvious inspiration, Hank Williams and Moon Mullican’s Jambalaya (On the Bayou). If it were the only recording that Al Terry had ever made, it would be enough to qualify him for a place in the Louisiana Music Hall of Fame. But as you will hear from this CD, it’s by no means the only great recording that Al made during his three and a bit years as a Hickory artist.
HICKORY’S CAJUN HILLBILLY is the first ever CD compilation of Al’s best Hickory sides, with an emphasis on upbeat recordings that also highlight the prowess of some of the finest pickers in 1950s Nashville, including Chet Atkins and Terry’s steel playing brother Charles (known as Bob). Bob Terry wrote many of the best tracks on this collection. His songs get the best out of Al’s warm, Jim Reeves-like, light baritone. Brothers Rusty and Doug Kershaw and pianist-vocalist Wiley Barkdull also feature strongly among the musical backup, making this set an essential purchase for anyone who bought and enjoyed their own 2CD Ace set, “Louisiana Men”.
Besides great up-tempo sides like the Johnny Cash-influenced Roughneck Blues and the rockabilly classic Watch Dog (with killer lead guitar from Hank Garland), there are magnificent examples of hillbilly balladry, such as House Of Glass, to savour. When you hear these recordings you will wonder why Al Terry never took his place among Country music’s elite. Not only could he have been a contender, he should have been one…
The great music on this CD is complemented by a typically exhaustive sleeve note from genre expert Dave Sax, and a handsome selection of label illustrations that will thrill any collector. With a blend of music that represents the genres incorporated in its title, “Hickory’s Cajun Hillbilly” ‘does exactly what it says on the tin’.
By Tony Rounce