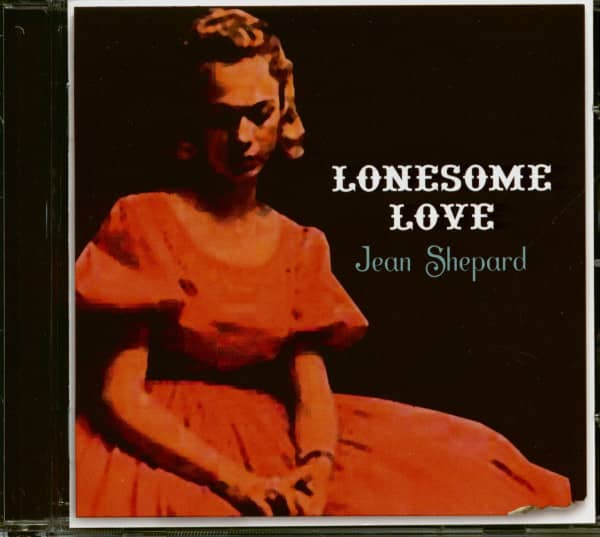 (Righteous) 24 tracks (57:19)
-
Jean Shepard's arrival on the country scene in 1952 followed on the heels of Kitty Wells' success and, like her she became one of the first female acts to be featured on The Grand 01' Opry. Formerly a member of The Melody Ranch Girls she was discovered by Hank Thompson and during the early 1950s she began to carve out a career as a honky tonk singer. But, the arrival of the Nashville Sound in the late `50s seemingly reduced her popularity immeasurably. In fact it wouldn't be until the '60s that her career would be revived. Indeed, her releases at the tail end of the '50s and early '60s fell outside of the Nashville-approved sounds of Chet Atkins, Jim Reeves and Don Gibson that were sweeping the genre and slipped into obscurity.

This CD gathers together two of those lost albums from 1958 and 1959, the tempered honky tonk rhythms of the super rare 'Lonesome Love' which owes more than a little in its construction to the emerging rock 'n' roll scene and the following year's 'This Is Jean Shepard' which revisited some of her previous single releases. For whatever reason, in the growth of country music, Shepard's rich vocal and yearning, mid-tempo arrangements on the former were overlooked, while her earlier legacy remains unheralded to some degree.

On 'Lonesome Love', her dalliance with rock 'n' roll on 'Sweet Temptation', next to the more earthy cuts like 'A Thief In The Night' and a rattling good version of Hank Williams'You Win Again', showed the influence of new music on her highly accessible sound. It's amazing, really, when you listen to her soulful delivery on the rock 'n' roll-styled ballads 'I'll Never Be Free' and 'Memory' or the truly commercial `You're Telling Me Sweet Lies Again' that Shepard wasn't more successful.

While Kitty Wells' vocal had a deeper more yearning appeal and her choice of material was singularly aimed at the honky tonk where another beer would solve the inadequacies of relationships gone sour, Shepard's sound on 'Lonesome Love' was looser and dare we say more 'groovy', especially her take on the closer, `I Love You Because', a faster and more irreverent version than the huge hit by Jim Reeves. In the hands of Shepard and her string-bending guitarist, it takes on a whole new dimension. This was music that was truly different.

`Lonesome Love' was released in December 1958, with 'This Is Jean Shepard', a compilation which looked at her earlier 45s, following in September 1959. Again, kicking off with a country gem in Jack Rhodes and Joe Hays' beautiful 'A Satisfied Mind' from 1955, the mood quickly changes into novelty honky tonk for 'Two Whoops And A Holler', which was originally to 'Why Do You Wait?' from 1954, a song which is far more aching, primal Shepard. The mood is in part similar to Wells' social commentaries, especially on 'Why Did You Wait?', `The Other Woman' from 1957 and 'Act Like A Married Man' from the same year and the Shepard vocal has an added rasp, some distance from the smooth intonation on `Lonesome Love'.

Here we have Shepard in more traditional honky tonk territory, before rock `n' roll had been infused into every kind of music and her performances on `Beautiful Lies' and `Under Suspicion' have all the tearjerking qualities that such music live and dies by. Indeed, the glorious `Crying Steel Guitar' from 1953, Shepard's debut single, is, as the title suggests, a true piece of lonesome dustbowl soul.

From 1964 onwards, Jean Shepard enjoyed far more commercial success, but you can't help feeling that if `Lonesome Love' had found a few more ears back in the day the fusion of rock 'n' roll and country music would have taken an even more strident path. (Dave Henderson)

Learn more about Jean Shepard
Jean Shepard As America was pulling out of the Great Depression, the fifth of ten... more
Close menu
"Jean Shepard" 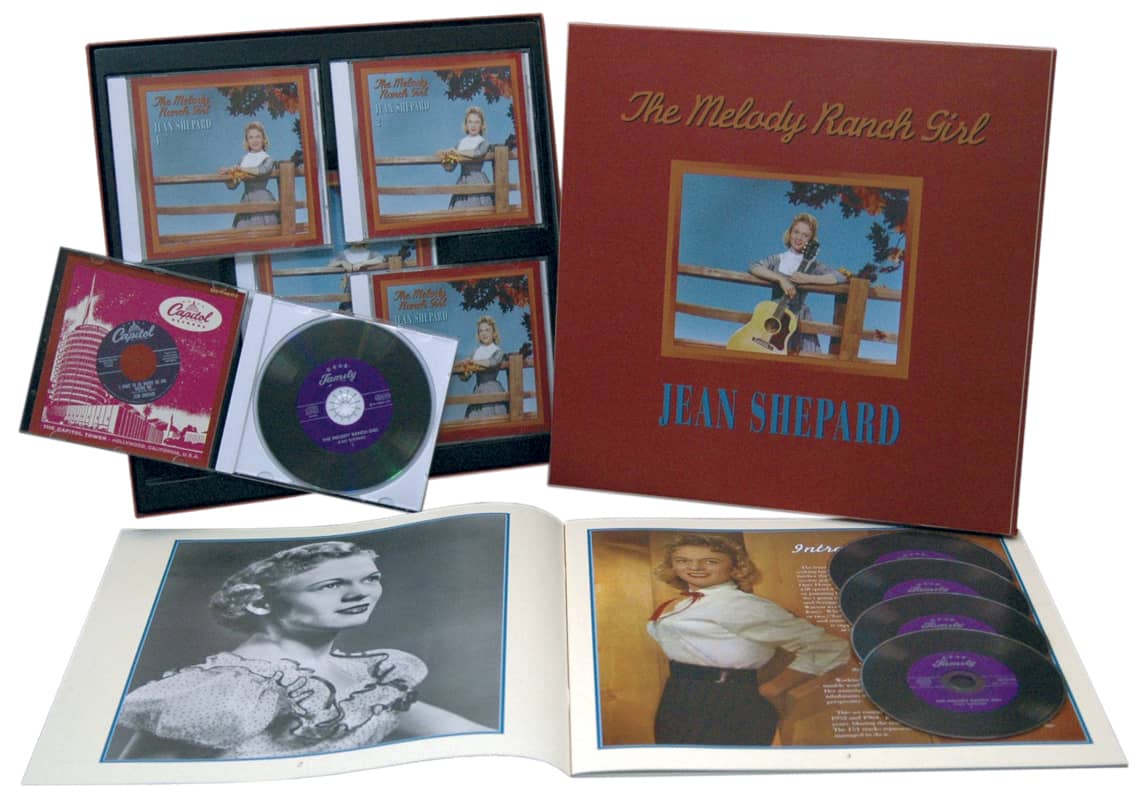 As America was pulling out of the Great Depression, the fifth of ten children was born to Hoit Adrian and Allie Mae (Isaac) Shepard.  Ollie Imogene Shepard was born November 21, 1933, in the town of Paul's Valley, Oklahoma.  The family lived a hardscrabble life trying to eke out an existence as sharecroppers.  Says Jean, "We were farmers.  Loretta Lynn talks about being poor, believe me she can't spell it compared to what were."  She continues, "Her daddy worked for the coal mining company and her daddy could go to the company store and he could get things.  Sharecroppers couldn't do that. We raised everything we ate.  I didn't taste beef until I was about 14 years old.  We ate chicken and pork.  My mother canned everything."

The family moved in 1936 about 350 miles southeast to Hugo, in Choctaw County. There they continued to farm a modest plot of land.  During those very early childhood years in Oklahoma, Jean began to develop her musical ear.  Jean and her nine siblings all sang in church, and according to Bakersfield musician Bill Woods, "all of the kids were good singers, especially her sister Corlew."  She also cut her teeth on the music of the Light Crust Doughboys, Bob Wills, and Jimmie Rodgers. And like nearly every country singer whose career broke in the 1940s and 1950s, the Grand Ole Opry was also a Saturday night ritual. With few other diversions from the daily grind, the family would gather around a battery-powered radio to listen to the famed broadcast over WSM's 50,000-watt clear-channel station.

Shortly before Jean's 11th birthday and as World War II drew to an end, Hoit and Allie Mae moved their large brood to Visalia, California, about 100 miles north of Bakersfield in Tulare County.  Jean's life there paralleled that of those folks Merle Haggard chronicled in songs such as  Tulare Dust.   Situated in the verdant San Joaquin Valley, a rich agricultural stretch, the family continued to farm. 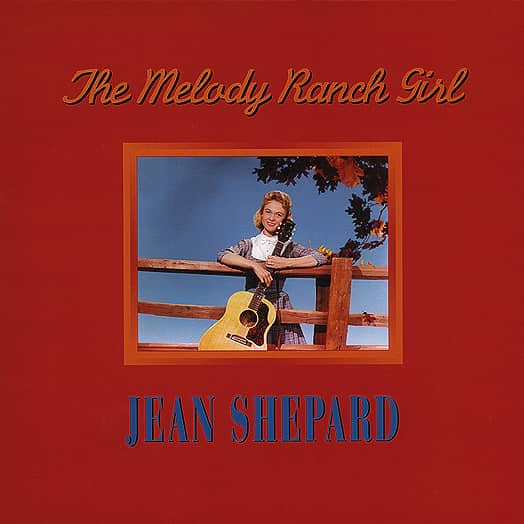 By her early teens,  Jean's interest in country music had fully blossomed.  "I used to know every song that Jimmie Rodgers sang.  I learned to yodel from Jimmie Rodgers' records.  My daddy would save up his pennies so that he would be able to buy a Jimmie Rodgers record." Jean continues, "I didn't know there was anything but the blue yodel until one day I heard Elton Britt on the radio. He was singing a song called 'Chime Bells´.  I thought   `Oh man, there’s more to yodeling than the blue yodel.´  So I went down to the record shop and I bought this record.  Well, I laid it down in the seat and my brother sat on it and broke it.  So I went back the next week, I had to save my 39 cents, you know, and bought another one.  I put it up in the back of the car and the sun melted it,“  she laughs.  "I then went back the next week and bought another one.  They guy at the record store said, 'Imogene, what are you doing with these records?  Are you eating them?'  I held that third record on my lap all the way home.  But I learned the Swiss yodel."

Life in California meant a lot of hard work for the Shepard clan.  Jean, though, found time for the normal adolescent activities such as school clubs, horses, and the like. During her sophomore year at Visalia Union High,  Jean joined forces with four other girls to form the Melody Ranch Girls.

"There was a guy named Noble Fosberg and he had a place called Noble's Melody Ranch.  We got our name from that.  Noble kind of took us over and managed us."  The band consisted of sisters Gerry and Wendell Starling on piano and guitar, respectively; steel guitar player Bonnie Cantrell who, according to Jean, "was exceptionally good, she played exactly like Little Roy Wiggins;" and Shirley Vinyard on drums.  Jean rounded out the group on the bass fiddle. Recalls Jean, "Shirley didn't know anything about drumming and I didn't know anything about playing the bass.  But that's what we needed to fill out the band.  We weren't very good, though. We were a novelty.

"We didn't have a lot (of money).  My folks went down to the Seaboard Finance Company and pawned all our furniture, literally.  They put it up for collateral to buy me my bass fiddle.  My bass cost something like four hundred dollars back then.  Forty-five years ago that was a lot of money.  That's how supportive they were of my music."

Soon the Melody Ranch Girls were working steady gigs three nights a week at Pismo Beach near San Luis Obispo and Jean was able to retire her debt for the bass.  Meanwhile she continued to meet her academic obligations at Visalia Union High.  (Steel guitarist and longtime Merle Haggard band member Norm Hamlet and guitarist Gene Breeden, who would later play on some of Jean's LA sessions, also attended Visalia with Jean.)  "We played Fridays, Saturdays, and Sundays and then we'd jump in the car and drive from Pismo Beach back across the mountain range just in time for me to get home, jump in the shower and catch the school bus.  I did this for about two years.  It was rough but I finally graduated," she says. 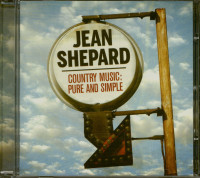 Tracklist
Shepard, Jean - Lonesome Dove (CD) CD 1
01 A Thief In The Night
02 I'll Hold You In My Heart
03 The Weak And The Strong
04 You'd Better Go
05 Sweet Temptation
06 I'll Never Be Free
07 You Win Again
08 I Hate Myself
09 You're Telling Me Sweet Lies Again
10 Memory
11 You Can't Break The Chains Of Love
12 I Love You Because
13 A satisfied mind
14 Two whoops and a holler
15 I'd Rather Die Young
16 Why Did You Wait
17 The Other Woman
18 Act Like A Married Man
19 Beautiful lies
20 You're Calling Me Sweetheart Again
21 Under Suspicion
22 Crying steel guitar
23 My Wedding Ring
24 I Learned It All From You
Funktionale