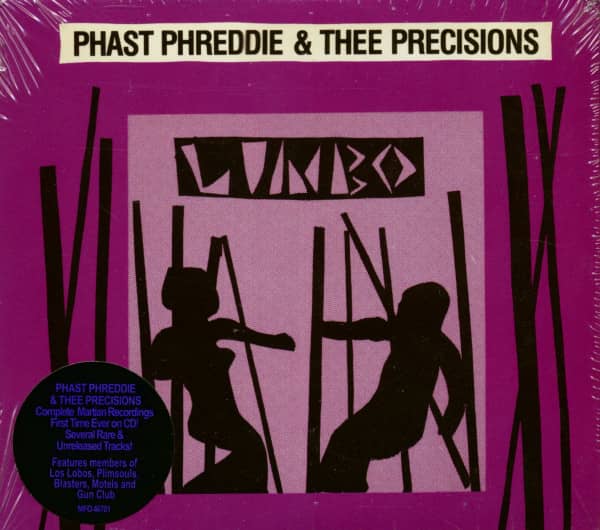 (Manifesto Records) 40 tracks, digisleeve
Phast Phreddie & Thee Precisions were a Los Angeles based band in the 80s fronted by Fred Patterson, aka Phast Phreddie. They were unique in the sense that they came up right smack dab in the middle of the L.A. Punk Rock scene, and were on many bills with those punk bands, but were playing Swingin' Jump Blues, R&B, Jazz and Be-Bop, and featured some of the best players the city had to offer. This is a re-mastered 2CD Deluxe Edition of Limbo, that features the West Hollywood Freeze-Out EP as well as a complete 2nd CD of rarities, demos, live tracks and the 1986 self released single "Only Lovers Left Alive."These recordings have never before been available on CD and feature numerous guest artists, including Steve Berlin of Los Lobos, Jeffrey Lee Pierce of the Gun Club, Marty Jourard of the Motels, Peter Case, Gene Taylor and Dave Alvin.Phast Phreddie & Thee Precisions were legendary in the city of Los Angeles, but the best kept secret in many other parts of the world, but after this release, the secret will be out.