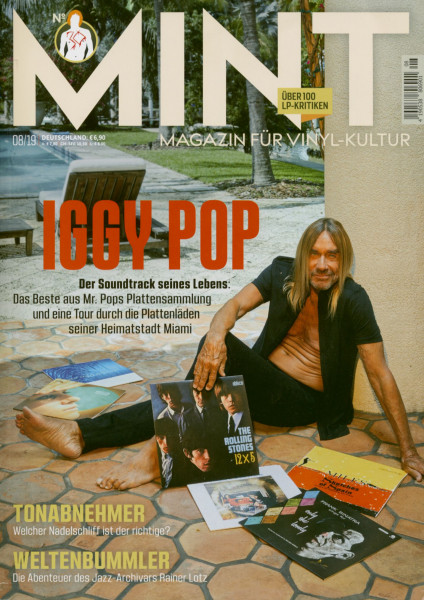 Magazin, German, 21x29.5 cm, 164 pages
Cover story: Iggy Pop - the soundtrack of his life
We visited Iggy Pop in his hideaway in Miami and let him present us the most important albums of his collection, his choice between the Rolling Stones and Miles Davis offers some surprises - and of course his personal story behind each album.
Vinyl scene Miami
And if you're ever at Iggy Pop in Miami, we've already checked out the best record stores in his homeland, including some recommended by Pop himself.
Rarity hunters
In our series "Zuhause ist, wo die Plattensammlung steht" we visited Peter Barton and Chris Heil. The two friends present their extensive collection, in which there is also a highly curious pressing of the Prince LP "1999".
Border crossers
Rainer Lotz has been collecting records for 60 years - his area of expertise: very early jazz records produced outside the USA. His passion made him travel around the world, in Kenya Lotz risked his life, in Yemen he was taken hostage. A story about a truly passionate collector.
Revealed: Supertramp - Breakfast In America
The fourth album of the British pop prog superstars becomes the final bestseller. We reveal the secrets of the cover, many of which can only be discovered at second glance.
Serdar Somuncu on Michael Jackson - "Thriller
The cabaret artist bows to one of the greatest pop albums of all time: "Thriller" by Michael Jackson.
Dr. MINT
The topic of environmental protection does not pass record collectors by either. So, Dr. Mint... Is the cellophaning of records harmful to the environment?
The experiment
With two colleagues, Moritz Illner runs the vinyl editing studio Duophonic - and at the same time proves that a cutting machine can also be used as an instrument. A story about a vinyl-mad sound avant-gardist.
Big Needle Special
Small, but always decisive: What makes a good stylus, which polish is ideal for which music fan - and what does it all cost? In the MINT Needle Special, we answer all relevant questions on the subject.
Further topics in the issue
More than 100 LP reviews, the category "33 1 / 3-Cover", news features, vinyl preview, record exchange dates, Sleeveface of the month and much more.