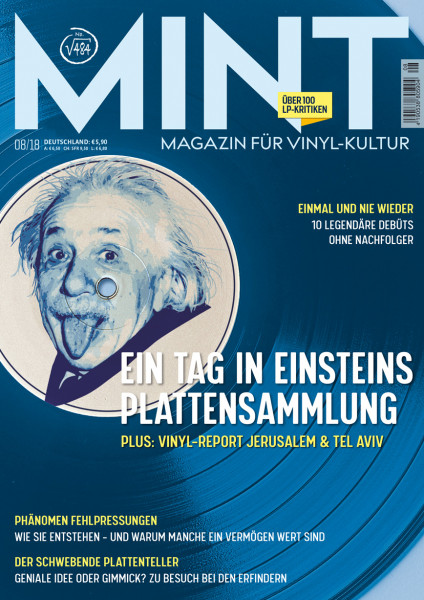 Magazine, German, 21x29.5 cm, 162 pages.
Topics and features of the MINT 22:
Cover Story: A Day in Einstein's Record Collection
Exclusive: MINT spends a day in the Einstein-Archive in Israel and devotes his attention to the ingenious physicist's extensive record collection. An exciting voyage of discovery through rare and usually strange records.
Vinyl-Report Israel
Jerusalem and Tel Aviv have a lot in common, but not exactly a paradise for record collectors. Our city trip looks behind the scenes of an interesting and bustling scene.
Debuts without successors
Once and never again - MINT tells the story of ten legendary albums, which for various reasons remained without successors.
Phenomenon of false pressing
A nuisance for musicians and record companies, a stroke of luck for sworn collectors. We explain how it comes to mispressing, present the most important and say what they can be worth.
Flying turntable
MINT visits the Slovenian inventors of the Mag-Lev turntable, which attracts astonishing glances with its flying turntable. Whether this is an ingenious idea or just a gimmick, everyone has to decide for himself - our look behind the scenes explains the origin and explains how this unique invention came about.
Sophie Hunger on Kid A by Radiohead
Swiss singer and songwriter Sophie Hunger bows to Radiohead's Kid A and tells why she had to skip school on the day the album was released.
Revealed: Melvins - Houdini
The artist and Man´s Ruin label founder Frank Kozik designed a legendary artwork for the fifth album of the grunge/doom rock band Melvins. We reveal the secrets behind the cover.
Dr. Mint.
Heatwave with record temperatures: Dr. Mint investigates how harmful heat really is for vinyl.
Further topics of the issue
Over 100 LP reviews, the "33 1/3-Cover" section, news features, vinyl preview, hi-fi tests, record exchange dates, the sleeve face of the month and much more.