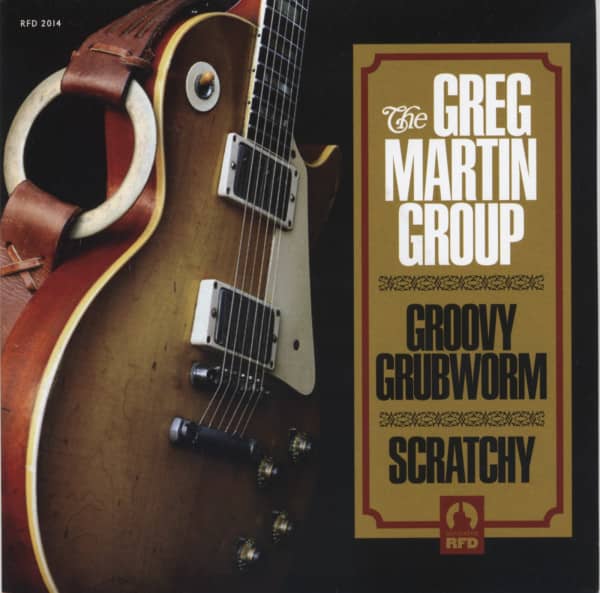 (2014/Sundazed) 2 tracks.
The Kentucky Headhunters’ legendary guitar guru Greg Martin’s debut solo single! Joined by Dean Smith and Steve Holmes, Martin and associates lay down storming, stomping renditions of two favorite ‘60s numbers, “Groovy Grubworm” and “Scratchy”—the former a brilliant marriage of a modified Bo Diddley beat and country and western boogie, and the latter a sleek, shining reading of Travis Wammack’s 1964 original! Both feature Martin’s 1958 Les Paul Standard, 1968 Marshall 50-watt Plexi head, and ‘60s Marshall 4x12 cabinet coupled with his untouchable tone and technique, cut to mono and recorded live and as-it-happened just as if the sessions had taken place 50 years ago. A turbo takeoff for both the Greg Martin Group and Sundazed RFD!
'Growing up in Louisville, KY, I was hearing a healthy diet of instrumental artists on local radio stations. ’Groovy Grubworm’ and ‘Scratchy’ are two of the songs I grew up hearing as I was learning to play. This project is a culmination of everything I’ve learned over the years. Getting to do an instrumental project on a vinyl 45 was a childhood dream!' - Greg Martin (Greg Martin Group / Kentucky Headhunters)