The Kalin Twins: When (CD) 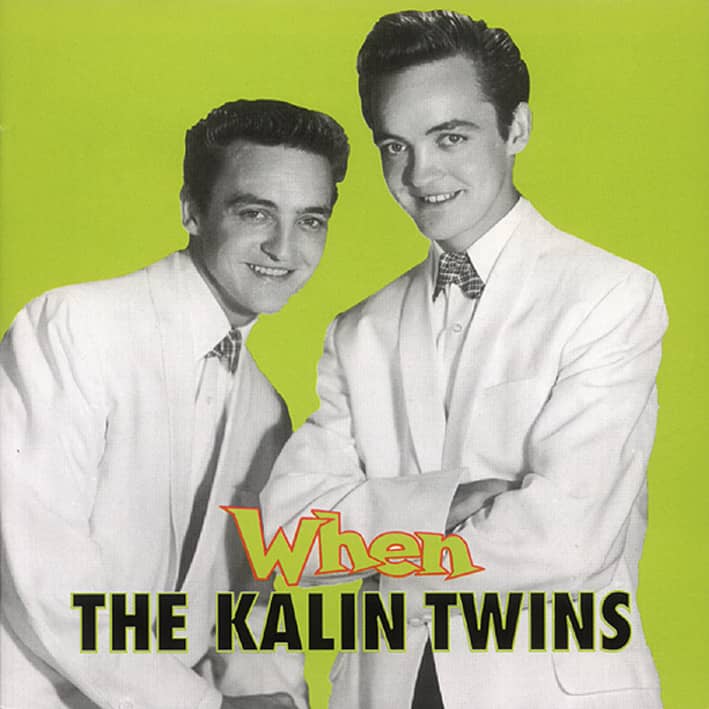 Among the pop stars of the first years of rock and roll, brothers Herbert and Harold Kalin were perhaps the most unlikely. The twins were older than most of their contemporaries (their Decca biography lists their birth date as February 16, 1939, although they were in fact born five years before that date), and their interest in the rock and roll of the time was minimal.
Harold `Hal' Kalin doesn't argue with this. "We work once or twice a month these days," he says. "We play atfraternal organizations, Elks clubs, places where people are old enough to remernber early rock and roll and the stuff right before. We do a forty-five-minute show. We play some of our old records, and then some pre-rock stufffrom people like Johnnie Ray and Nat King Cole. Back when we were stars, the music just prior to rock and roll is what we were listening to. We threw in some Everly Brothers into the thing with our harmonies, but our real love is the music just prior to the rock-and-roll era."

Yet the Kahns must have had some feeling for the music. In the first year of their deal with Decca, they enjoyed four charting singles, among them the U.K. Number One smash When (in the U.S. it reached Number Five). Says Hal, "While we were making records, we were going for the currently commercial sound. We weren' t ciiverging from what was on the current pop hit parade. But we were different, maybe because we were a bit older. Whatever you grow up listening to in high school is what stays with you uppermost. Herb and I had graduated in the early Fifties, so pop stylists were our bag. But we listened to what was making it to the top andfigured out how to do it."
"That' s not to say that rhythm-and-blues didn' t influence us," says Herb. 'lt sure did. We heard early rock and roll. We grew up in a small New York State town, and people like LaVern Baker, Ruth Brown - we weren' t allowed to listen to them. But we did find ways to hear them, and we were influenced by them in an underground way, although we thought of show biz more in the Tony Bennett pop vein."

The pair grew up in Port Jervis, New York, and locked into the idea of a music career early, even trading tapes during Hal's stint for Uncle Sam in Japan. Early attempts at a deal proved fruitless, although in their adopted hometown of Washington, D.C., they hooked up with songwriter Clint Bal-lard, who got them a deal with Decca. Their first session, the first of many with orchestral conductor Jack Pleis at the heim, featured three big-produc-tion rock-and-roll tunes - Ballard' s Jumpin' Jack and two Kalin/Kalin com-positions, Walkin' To School, and The Spider And The Fly - that had one foot in the semi-rock pop of Paul Anka and Bobby Darin and one in Everly Brothers-style close harmonies. The songs were sprightly and efficient, but nothing special, and none of the songs sneaked onto any national charts. But on their second session, the Kalin Twins clicked.

Hal reports that the pair' s biggest hit, When, started off as a B-side. "Decca thought that Three 0 (Clock Thrill' was more of teenybopper hit. lt men-tioned a soda store and had a nice sax rille. lt had all the elements. They took out big ads in Sillboard' , but we were secretly promoting 'When.' We knew `When' would make it. Decca was pushing Three 0' Clock Thrill' for two months before 'When' took off." The brothers were right: the teenage love song When enjoyed a more propulsive rhythm, less intrusive backup vocalists, and more suitable lyrics. It was a natural pop hit.
Neither of the Kalins have fond memories of Forget Me Not, the next single, which reached Number Twelve on the `Billboard' pop charts. Says Herb, "This was afollow-up to a million seller. Everything was bigger now and we had very little time to do it. Decca scheduledarecording session in New York City and we had only three days to record both sides of a single and get back an the road. We had no time. I remember disappointment in having so little time. In retrospect 1 would' ve devoted a month to coming up with a bigger hit."

Similar regrets surrounded /t's Only The Beginning, which made it to Num-ber Forty-Two. "It didn' t hit me as being sensational, just a commercial piece of material written by New York City commercial songwriters," Hal says. "lt had a good teenage message and we had a good teenage sound, so it was a correct marriage for the times. But we were not recording what wefelt deep down."
The Kahns' final charting single was Sweet Sugar Lips, which spent only one week on the charts, at Number Ninety-Seven, before it disappeared. This came from the first of their Nashville sessions, under the supervision of producer Owen Bradley and with the support of such Nashville session-musician stalwarts as drummer Buddy Harman, guitarist Hank Garland, and a piano player named Floyd Cramer. But recording was no longer the Kalins' focus. Through the remainder of their Decca contract, Herb and Hal spent most of their time on the road. They toured the U.K. in 1958 with Cliff Richard as an opening act, although `Melody Maker' reported of one Newcastle performance, "When Cliff eventually got offstage, compere Tony March could not announce the top-of-the-bill Kalin Twins because of 'We want Cliff chanting and stomping. Cliff had to return to calm them down."
One of the Kalins' most memorable performances in the wake of When was a date at the Brooklyn Fox in an Alan Freed package show with Chuck Berry headlining. Says Hal, "In those days most of us perforrners were signed to the General Artists Corporation in New York, and they grouped everybody together in those package shows. On that tour there was one bus for singers and one bus for the backup band. lt was a grueling setup. We were in the bus all the time. We only stayed in hotels every other night. Those one-nighters left 14S dizzy withfatigue, all those 20-hour drives. A lot of it was just a blur."
"We spent most of our time backstage watching the show," remembers Herb. "We' d do ourfour orfive numbers and go back to watching."

In the Sixties, after the hits stopped, the Kalin Twins started a song-buying service. "The song-poem business is more or less a racket," acknowledges Hal. Indeed, their advertisements would appear an the same page as notices like `Give Me Just One Evening and I'll Teach You To Hypnotize Easily!' But he is quick to separate the Kalins from con artists. "We' d work the songs, do legitimate promoting. lt took so much time we dropped it though, espe-cially after we heard negative feedback about people who' d take the money and send people the same two-chord garbage. We lasted about eight months in that business."
"A lot of people did that," Herb adds. "Our ads were side by side with the Everly Brothers guitar course and the Liberace song-poem deal. I guess we weren' t unscrupulous enough to make money. I remember we were inun-dated with lyrics, most of' em so horrible we' d send' em back."