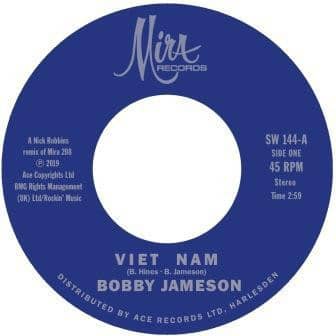 (Ace Records) 2-Track Single repro - 45rpm, wide center hole -
‘Viet Nam’ was originally issued on Mira records in 1966 but vanished without a trace.
Far from radio friendly with its fearsome Bo Diddley beat, wailing harmonica and strong anti-war lyric, the track has gone on to become a much sought-after garage rock classic and is now almost impossible to find on 45 at any price.
It made an appearance on 1967’s Mondo Hollywood soundtrack, the sort of record Quentin Tarantino might have in his collection. It is hardly surprising, therefore, that it is featured in the director’s new movie Once Upon A Time In Hollywood.
This 45 is mastered straight off the original 3-track tape and on the flip we have a fantastic instrumental version!