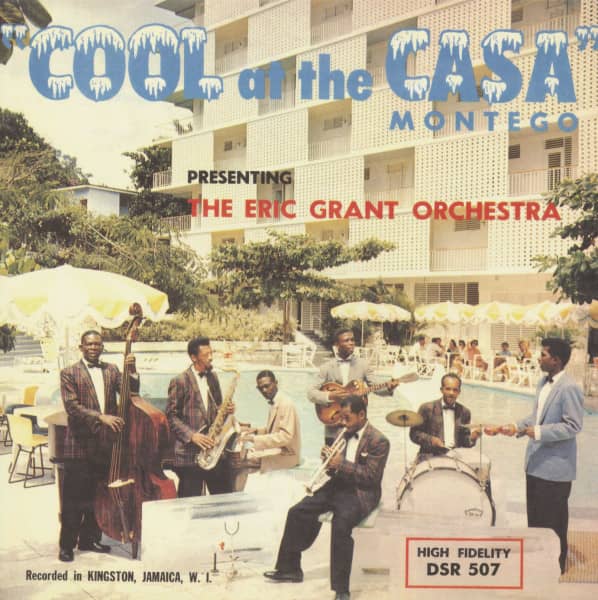 (Dub Store) 12 tracks Re-issue of the original Jamaican 'Casmo' LP album Jamaica is many things to many people. To some it is relaxing in the sun, swimming in the crystal-clear waters or golfing on a course high in the mountains. To others it is sipping a refreshing Planter's Punch made with delicious Jamaica rum, drinking superb Blue Mountain coffee or just collecting bargains in the free-port shops and native markets. But to almost everyone, Jamaica is fun and music ... not just ordinary music but a very special kind which makes you want to tap your feet and dance. These exotic melodies may come from the tinkling guitars of the 'John Canoes', traditional water-borne entertainers, or they may drift forth from one of the many intimate cocktail lounges which are sprinkled all over the Island. At the Casa Montego Hotel, one of Jamaica's leading resorts, the sound of music comes from a native band led by one of Jamaica's outstanding young musicians, Eric Grant, who has put together a smooth combination which can satisfy every taste. Eric Grant is a strange mixture for a Jamaican musician, for he combines a classical background with the native talent for rhythm. Most Jamaican musicians come by their talent naturally with little or no formal musical education. Grant has the added advantage of having learned music from his mother, a piano teacher. After years of serious study, Grant learned that classical pianists are not exactly in demand on the 'Lil' Island in the Sun', so he decided to switch to jazz. His first professional efforts, however, were not at the piano. Blessed with a fine tenor voice, he soon found a spot on a cruise ship as soloist with the band. In time he discovered that people liked to hear him sing and play his ones accompaniment so he would spend hours entertaining passengers with their favorite requests. While on the cruise ship, Grant visited many ports in the United States where he picked up the various jazz styles. Grant often is asked how he knows no many songs without referring to sheet music. He explains that he learns them by listening constantly to the radio when he is not on the bandstand or the Casa Montego. In this way, he keeps up on all the latest hit tunes. Grant does all the arranging for the group which he organized a few years ago as a trio. Today the band has five regulars and a soloist, all Jamaicans. Thoroughly American in style, the band have an extremely smooth beat which is enjoyable for either dancing or for listening. They have captured the rhythms of the Caribbean and South America and have mixed them with the jazz of North America to present a brand of music pleasing to all. Although the Combo play a dramy waltz and a snappy fox trot equally well, they receive the most requests for the Cha Cha and the Meringue, according to Grant. He has included many popular favorites at the Casa Montego in this album.