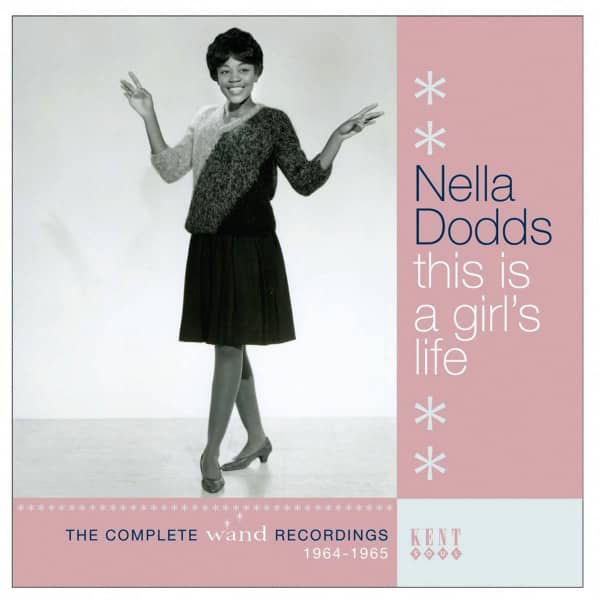 (Kent Soul) 15 tracks, the complete WAND recordings 1964-65 that defines the early Sound Of Philadelphia. 12 page booklet.
-
Nella Dodds should, by rights, have had an album release 40 years ago, when she was signed to New York’s Wand label via a production deal with Philadelphia’s Dyno-Dynamic Productions – essentially the precursor of what would eventually evolve into Kenneth Gamble and Leon Huff’s classic 1970s ‘Philly Sound’. Nella should also have had several major Pop and Soul hits, rather than just the two fair to middling ones that she did have. But by the time that Philadelphia usurped Detroit as the epicentre of commercial Soul music, she had forsaken music for domesticity, destined to be regarded as another ‘great unknown’.

Following some splendid detective work by “In The Basement” magazine’s editor David Cole, we read Nella’s first-ever interview. That was prompt I needed to begin the process that has resulted in this album.

Nella’s Wand catalogue, her 60s output in total, only amounts to 15 tracks, three of which have remained unissued until now. “Girl’s Life” may not be the longest CD that Kent has ever released, but it’s one of the best. The combination of her unusual, highly beguiling voice, some excellent songs and corking dance grooves make this a must for lovers of vintage soul. As well as Nella’s hit cover of the Supremes’ Come See About Me and its successful follow-up Finders Keepers, Losers Weepers, it features the Northern Soul favourites Come Back Baby, Honey Boy and P’s And Q’s are three brilliant unissued titles that will gladden the hearts of everyone who has ever wondered whether or not there was more than Nella’s six original Wand 45s.

David Cole interviewed Nella again and updated his original article to bring her story up to date. Nella now combines singing with an acting career (she appears in the current hit movie Evan Almighty) and is thrilled to bits that her old records are finally being returned to circulation. (Tony Rounce)