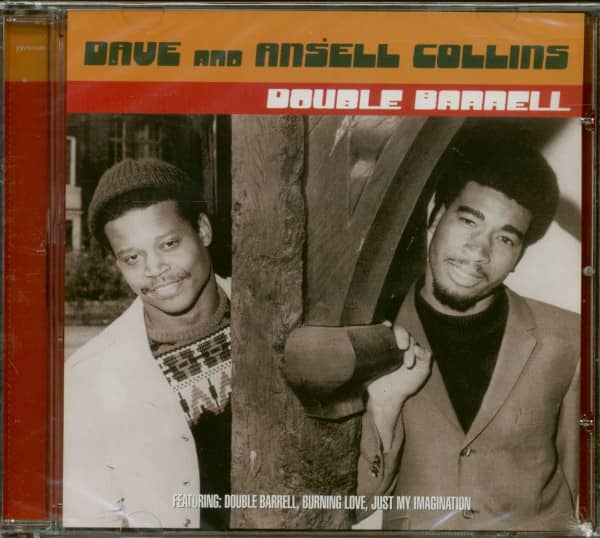 Before we look at the careers of Dave and Ansel Collins lets bury the almost resolute misconception that our two heroes are maternal brothers. They are however, brothers in the eyes of all African descendants as "every brother is a brother".
Dave was born David John Crooks on 10 October 1947, He began his career singing in the Techniques alongside Bruce Ruffin and Winston Riley. Any one interested in this period of his profession should check 'Traveling Man', 'Lonely Man' and 'Your Love's A Game' that 811 featured his distinctive lead vocals.

Following the group's demise, Dave began recording with Lee Perry who issued a number of songs by the singer, including of 'Blo,ing In The Wind', 'Build By Whole World Around You', 'Runaway Child' and 'Prisoner Of Love'.
Later, he teamed Dave with the Wailers, Lho provided backing vocals on a sublime version of 'Don't Let The Sun Catch You Crying' and the 1971 Jamaican hit, 'What A Confusion'. It was through Perry Dave discovered his 'barking' DJ style that led to his international notoriety and pseudonym, Dave Barker, With Scratch at the controls, he recorded 'Shocks Of A Mighty', 'Upsetting Station' and 'Skanky Chicken', which were followed by his album debut, 'Prisoner Of Love - Dave Barker Meets the Upsetters'

Around this time, he also recorded with Duke Reid, who produced 'Funky, Funky Reggae' and the classic 'Lock Jaw', as well as Bunny Lee, who issued a series of titles by the singer, including 'Hot Sauce' and fine renderings of Garnett Mimms' 'A Quiet Place (aka Johnny Dollar)' and the Drifters' 'On Broadway'. But Dave's most famous session from 1971 was with the founding Technique, Winston Riley that produced the world renowned 'Double Barrel'. Issued in thy UK on Trojan's Techniques subsidiary, the record credited Dave alongside keyboard wizard Ansel Collins, who played on and produced the rhythm track.

The song was slow to start having first appeared on Trojan's 'Club Reggae' (T8L 159), but with repeated airplay on pirate stations and Radio Luxembourg the tune entered the UK pop charts in March 1971 and went on to hold the top spot for two weeks. Dave and Ansel were promptly flown over to London to perform the hit on the BBC television series, Top Of The Pops. Special effects in the early seventies were still in their infancy, as demonstrated on Dave's echoed introduction, 'I on the magnificent, I'm backed by the shack of a soul boast - most thundering storming sound of soul. I am doubleu-o-o-oand I'm still up here again, which featured alternate camera angles to illustrate the effect. The band also demonstrated a sense of humour when they lampooned certain preconceptions they experienced from the media by performing in grass skirts.

Ansel Collins was born on 16 April 1948, He began his musical career as a vocalist in 1961 Lhen he performed at the Vere Johns Talent hour. His success led to his being recruited into the Caribbeats as the lead vocalist and during his time with the band he recorded at Studio One, ,here he became more involved in session work. Around this time, legendary drummer in Brantford Road, Winston Grennon encouraged Ansel to work on his drumming skills, while inspired by Caribbeats leader, Bobby Aitken, he also began playing keyboards. And it was his abilities at the latter that were to lead Musk MAI him making a - lasting impression on the development of Jamaican music Bu the late sixties, Ansel was regularly performing on sessions for local producers and in the latter part of 1969, he cut a number of organ-led instrumentals for Leslie Kong, including `Night Of Love', `Fat Man', `High Voltage', `Samfire' and 'Cotton Dandy' - the latter being a hit around the same time as Dave's 'Lock Jaw', Ansel later worked with Lee Perry as part of the Upsetters where his keyboard skills enhanced the favoured `Night Doctor', a recording famously rumoured to have been Sly Dunbar's first sessio.

In addition to his legendary debut, Sly is credited as having played drums on the session for `Double Barrel', a fact Dave confirmed when recalling the events surrounding the song in an interview with Mark Lamarr on a BBC Radio Two reggae special, In the show, Dave stated
that Sly and Ansel offered the backing track to a number of producers and eventually persuaded Winston Riley to purchase the music, Winston's brother Buster Riley invited Dave to Joe Gibbs studio where he suggested the DJ imagined he was a giant shouting from a mountaintop. He was also inspired to think like James Bond (double - u o- o- o) when he added his now legendary lyrics to the rhythm in one take.
The success of the hit led to the follow up, `Monkey Spanner', which peaked at a respectable number seven in June 1971. Soon after, Trojan released Dave and Ansel's debut album, `Double Barrel' (TBL 162) that featured the two chart toppers alongside `Doing Your Own Thing', `Karate, (aka `I The Third') and `Secret Weapon', all of which feature on this compilation. The innovative artwork featured a pistol with two smoking beer barrels, each of which contained a Nubian beauty and is surely a classic in reggae album cover art.
The twosome were unable to maintain their run of pop chart success when Trojan reissued `Shocks Of Mighty' c/w `Monkey Spanner Version', credited to the duo. Commentators at the time suggested that the reissue was a blatant `cash in', oblivious to the fact that Ansel may have played on a session that produced the top-side.

The duo's supposed parting shot, `Ton Up Kids' did not feature Ansel's keyboards and failed to crossover into the mainstream, By this time Ansel had returned to Jamaica while Dave, in an effort to maintain his identity as a hit-maker, assumed his former partner's surname, Collins. By 1972 he had begun working with UK-based producer, Larry Lawrence for whom he recorded `Shakatak', a nod to the skinhead cult entitled `Smoothes And Sorts' and a version of Lee Dorsey's R&B hit, `Ride Your Pony', all of which later appeared on the 1975 Trojan album, `In The Ghetto' (TRLS 124), the now renowned credited to double act.

In the latter half of the seventies Dave, again known as Dave Collins, formed an allegiance with Bruce Ruffin and Bobby Davis (from the celebrated Jamaican vocal group the Sensations) to form Chain Reaction. The UK based group recorded a few soul hits notably `Never Lose Never Win' and remained together long enough to release three albums, namely `Never Lose Never Win', `Change Of Action' and `Chase A Miracle'.

Meanwhile Ansel, back with Winston Riley had recorded `Nuclear Weapon' (an instrumental version of `Double Barrel'), `Point Blank', and the celebrated `Stalag 17', the rhythm of which had originally been cut a backing track for Max Romeo. The tune spawned a series of hits from the seventies through to the present, with notable versions including Big Youth's `Jim Squeechy' along with 'All Nations Bow', Tenor Saw's 'Ring The Alarm', Sister Nancy's `Bam 8am' and Buju Banton's `Ring The Alarm Quick', as well as several one-rhythm albums.
In 1975 various instrumentals were released Ansel's name notably `Atlantic One', `Zone Five' and...