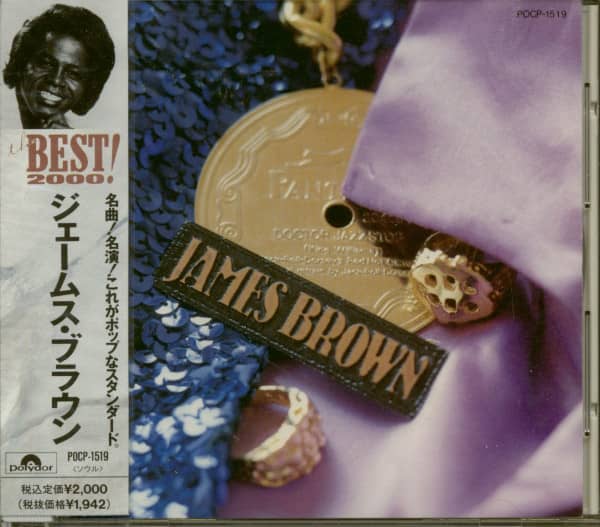 Learn more about James Brown
James Brown with JB's Always one of soul music‘s leading innovators and by his own... more
Close menu
"James Brown"

Always one of soul music‘s leading innovators and by his own nomination The Hardest Working Man in Show Business, James Brown had many a brainstorm. One of the lesser-remembered was the three-part single.

Two-siders were commonplace, but JB’s funk-dripping jams often went so long that they were pressed up on singles in three parts: Part 1 as the A-side, the other two squeezed onto side B. Soul Brother Number 1 used the gimmick on his 1970 R&B chart-topper Super Bad, and he brought it back for Soul Power, cut during an all-night session on January 26, 1971 at Rodel Studios in Washington, D.C. (Brown’s organization was hunkered down at Loew‘s Palace Theater there).

Brown’s band had changed drastically since the days of Papa’s Got A Brand New Bag and Cold Sweat. Saxist Maceo Parker, guitarist Jimmy Nolen, and drummer Clyde Stubblefield had all defected. In their place was a crew that featured brothers Phelps ‘Catfish‘ Collins and William ‘Bootsy‘ Collins driving the funk on guitar and bass. They were abetted by a core group of trusted Brown vets: drummer John ‘Jabo‘ Starks, tenor saxist St. Clair Pinckney, Bobby Byrd on organ and spirited responsorial vocals, and trombonist Fred Wesley, who had been gone for a while but returned to the fold to whip the newcomers into shape.

The Godfather of Soul’s legion of fans didn’t even notice all the uproar in James‘ organization. He started 1971 with the #4 R&B seller Get Up, Get Into It, Get Involved (Part 1) prior to the release of Soul Power, which blasted up to #3 R&B and #29 pop that spring (Wesley stepped out for an extended solo on Part 2, taking Maceo’s place as Brown’s instrumental foil). Over the course of the summer, Brown topped the R&B hit parade twice, with Part 1 of Hot Pants (She Got To Use What She Got, To Get What She Wants) (his biggest pop crossover item of the year, maxing out at #15), and Part 1 of Make It Funky.

By spring, the Collins brothers were off Brown’s payroll, itching to do their own thing and ending up with George Clinton’s Parliament-Funkadelic. James plugged in more talented young players and kept on dishing up the funk. Nobody did it better.